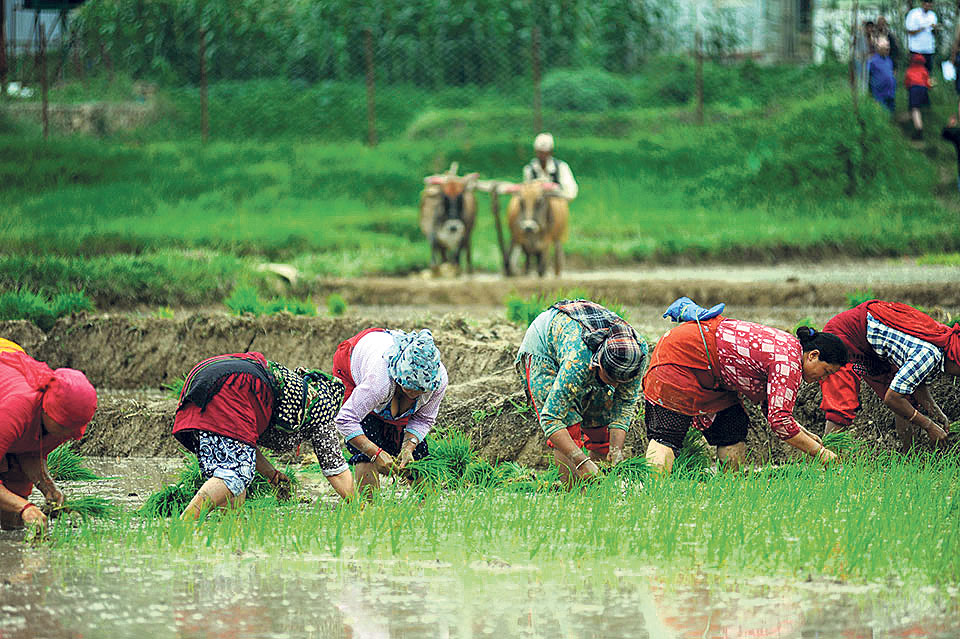 KATHMANDU, Dec 30: Though one-third time of the 10-year ‘Prime Minister Agriculture Modernization Project (PMAMP)’ launched in 2016 has already elapsed, the fiscal and physical progress of the priority project stands far below the target, raising doubts if the initiative will be able to deliver on its initial promises.

Touted as a game-changer for the development of agriculture in the country, the project seeks to modernize agriculture through concentrated efforts on production, processing and marketing. However, it has been found that neither the budget initially estimated for each year of the project has been allocated by the government nor the allocated budget is spent to the required level.

The project document says that a total of Rs 131 billion will be spent over the 10-year project.

“It’s a sad state of affairs for PMAMP as the fiscal and physical achievements stand far below the target,” said Dr Krishna Poudel, an agriculture expert.

There is always an inherent pressure on project officials to meet the physical targets and this led to the manipulation of figures, argued Dr Poudel, “The bottom line is to see whether the productivity of the agriculture sector has risen.”

Official figures suggest that Nepal imported agriculture products worth Rs 200 billion in the last fiscal year and it’s in the increasing trend.

“The weak result of the much-talked about program is worrisome,” added another agriculture expert, Bhairab Raj Kaini, a former director general of the Department of Agriculture. The human resource, agricultural inputs like seeds and irrigation, use of technology, market and transportation are some critical factors for the success of such schemes, he said, adding “all these factors are weak for PMAMP”.

Experts argue that the PMAMP has set very ambitious targets in the first place. “They set ambitious targets to justify the budget. They did not review the failures of various distributive and grant-based agricultural projects before implementing the scheme,” said Dr Poudel. The lessons from PACT, Maize Mission, Onion Mission, Soybean Mission and Lemon Mission could have contributed to refine the approach and review the inherent challenges of the grant-based model, argued Dr Poudel. “These projects, too, showed good results in documents, while the import scenario for agricultural products went from bad to worse.”

Experts say the project embraces centralized planning though the country has already entered a federal setup. The pockets and blocks are managed by the provincial governments while the zones and super zones are administered by the federal Ministry of Agriculture and Livestock Development (MoALD). The interrelation between these various tiers is clearly spelled in the project document, but in practice their interaction is utterly lacking, say project officials.

“The benefits of the agriculture grants are mostly taken by a few elites and politically powerful individuals. This fact is not taken in account for the PMAMP,” argued Kaini. The project provides 50 percent grant for seeds and fertilizers, fingerlings, and agricultural tools, while 85 percent of the grant is awarded to small irrigation projects, laboratory services and after-production infrastructures. A 100 percent grant is available for technical assistance.

An internal review by project officials also confirmed that politicization is rampant while forming the management committees for the pockets, blocks, zones and super zones. Also, the huge service delivery cost, unaccountable management committees and lack of transparency in project implementation are cited as the major challenges at the local level.

Major irrigation projects and agriculture zones and super zones formed by the project do not coincide, claimed Kaini.

As the project fails to reach out to new and backward regions, the production is not expected to rise, warn experts. The project has also included existing commercial farming areas in its coverage which includes potatoes in Kavre, and green vegetables in Kaski and Chitwan.

The project has helped in the establishment of expensive laboratories, high-tech green houses, cold storage facilities and purchase of machinery though these are not operational, according to Dr Poudel. “It inherits the same tendency of emphasizing procurement rather than operational management,” argued Dr Poudel, “An authentic data of production and need was not carefully collected before investing in these facilities.”

Project governance is another major issue for PMAMP. Seven senior officials of the project and six officials from the Department of Food Technology and Quality Control(DFTQC) were suspended on the charge of irregularities while procuring mobile laboratory vans for the project last year. The CIAA is investing the case.

“The implementation agency and evaluating agency cannot be the same,”  said Kaini.

The spokesperson for MoALD, Hari Bahadur KC, accepts the poor performance by the project.  He informed Republica that a committee headed by the secretary of MoALD  is reviewing the implementation modality of the project. Also, 16 under-secretaries of the ministry led separate teams to monitor the 16 zones and super zones established under the initiative recently, he said, adding, “With these two reports synthesized, we will be able to make amendments to the project modality.”

Last week, MoALD invited the secretaries at the the Ministry of Land Administration, Agriculture and Cooperatives of all seven provinces and discussed ways on establishing better linkages between pockets, blocks, zones and super zones. “We also discussed how we can track the progress reports of each province,” Spokesperson KC said, “A province level coordination committee comprising each district is also in the offing.”

Also, the government is mulling over providing grants to the farmers through banks to control the reported irregularities.

“A tripartite agreement among the bank, project and beneficiaries would help us mitigate the likely irregularities,”  senior planning officer at the project, Sunil Singh said.

The project is one of the implementing tools for the 20-year Agriculture Development Strategy (ADS) covering the period from 2015 to 2035. The strategy seeks to make Nepal self-dependent in food by the year 2035 by increasing the agricultural production and productivity, making arrangements for storage, making processing and distribution system more effective, increasing employment through the development of competitive and commercial agricultural system, maintaining food and nutrition security, and conserving sustainable environment.

Also, the project is expected to contribute to realize the goals of the Zero Hunger Challenge National Action Plan (2016-2025), specially its fourth pillar which relates to productivity and income rise for the small farmers.