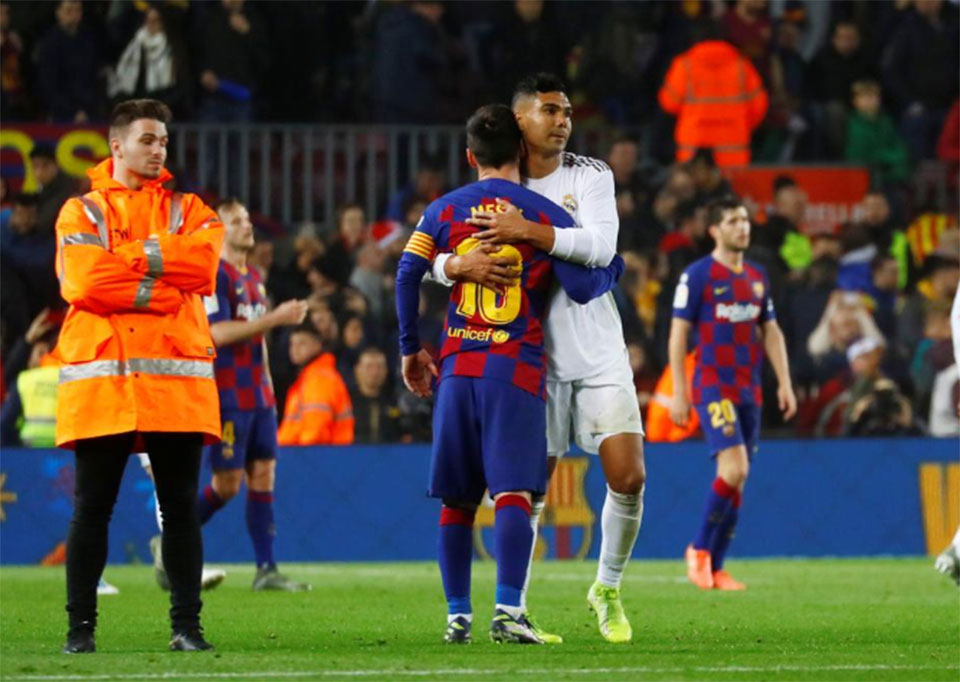 BARCELONA, Dec 19: Real Madrid outplayed Barcelona for much of Wednesday’s ‘Clasico’ but did not make their dominance count in a politically-charged match between the La Liga front runners which largely failed to live up to expectations.

The draw left champions Barca top on 36 points after 17 games with Real also on 36, five clear of third-placed Sevilla.

Both sides had shots cleared off the line but Real were left feeling more disappointed after winning the tactical battle but failing to take their chances.

They also had two penalty appeals turned down and Gareth Bale had an effort ruled narrowly offside as the fixture ended scoreless for the first time since November, 2002, when Luis Figo had a pig’s head thrown at him by Barca fans who felt betrayed by him leaving the Catalans to join Real.

Play was briefly halted on Wednesday when beach balls were hurled on to the pitch by fans in protest against the lengthy jail sentences handed to Catalan separatist leaders two months ago.

The game had been rescheduled from Oct. 26 due to the political turmoil that gripped Catalonia in the aftermath of those sentences and was played amid a protest near the stadium attended by several thousand people.

Loud chants of “independence” and “freedom” greeted kick-off while many supporters held up flags reading “Spain Sit and Talk” which had been distributed by protest organisers in a call for dialogue between the central government and Catalonia.

The action on the pitch did not quite live up to the tense atmosphere in the stands, however, as Barca failed to get going throughout the game and Real bossed the first half.

PENALTY APPEALS
Zinedine Zidane’s side fired 12 shots at the hosts’ goal before the interval, coming closest with a Casemiro header which Gerard Pique scrambled off the goalline, while they also had two penalty appeals waved away for challenges on Raphael Varane.

Real captain Sergio Ramos said his side were unfortunate not to earn a spot-kick.

“Today we saw a great Real Madrid side with a lot of character which is exactly the image we wanted to give. We went out to try and take the ball off them and we created a lot of chances,” he told reporters.

“We watched the penalty appeals at halftime and they seemed pretty clear, they are both penalties but we can’t change that. VAR is there to help but today we didn’t get that bit of luck.”

Barca looked short of ideas, with Lionel Messi being their only source of inspiration.

The Argentine could have broken the deadlock in the first half but Ramos slid to the floor to block his goal-bound shot.

Messi later teed up Jordi Alba with a scooped pass but the defender fired just wide, while Barca’s all-time top scorer was uncharacteristically sloppy at times and miscontrolled a clear opportunity to strike at goal in the second half.

Midfielder Ivan Rakitic admitted Barca had struggled for parts of the match.

“Real Madrid had a lot of chances in the first half, it was tough for us but then we had a few opportunities. It was a game that could have been decided by the odd goal but it wasn’t to be,” said the Croatian.

“We’re happy with how we played, but we just lacked that final touch of quality.”