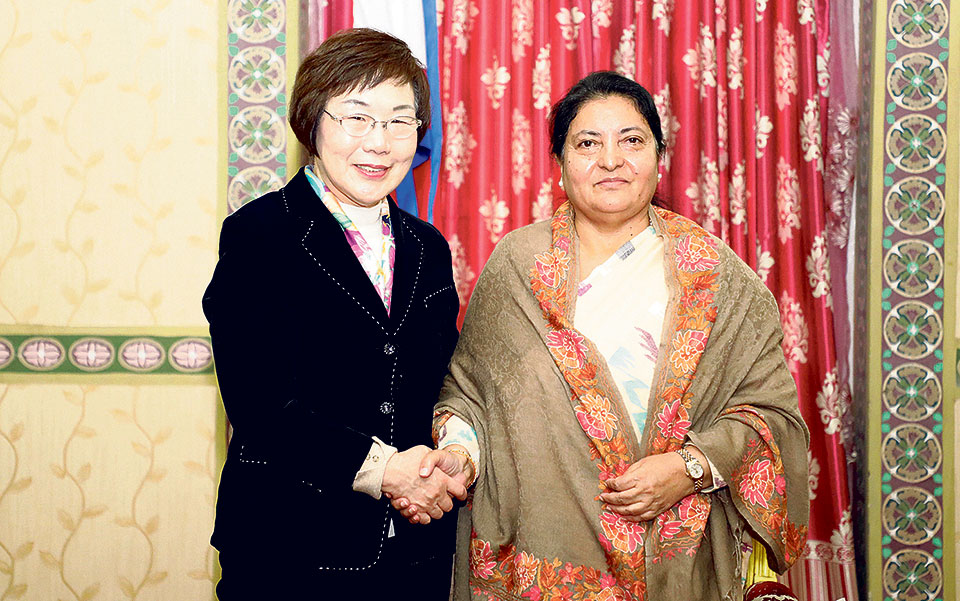 The meeting dwelled on the possible collaboration between the Korea government and Nepal government in gender mainstreaming programs in Nepal that could lead to women empowerment through quality education and economic opportunities to women in Nepal, according to a press statement issued by Koica. The delegation led by Lee included Ambassador of South Korea to Nepal, Park Young-sik, as well as other high level officials from Koica headquarters and Nepal office.

Both sides shared their common view about the importance of climate change in the current context. On the occasion, Koica President Lee said that the subject of climate change would be reflected as a cross-cutting issue in all Koica interventions in Nepal. She also apprised President Bhandari that and that Koica had identified SDG Goal 13 Climate Action to be incorporated in its development assistance programs globally.

During the meeting, Koica President Lee also briefed about Koica's activities in Nepal, and shared Health, Education (Technical) and Agriculture as the main focused areas for Koica development cooperation in Nepal. While mentioning that Koica has successfully completed a district hospital construction project in Mugu - one of the least developed districts in Nepal - Lee also underscored the need for making more meaningful collaboration between Nepal and Korea governments.

The South Korean government through Koica has been implementing various kinds of assistance programs such as development projects, fellowship program, CSO Cooperation, and World Friends Korea (dispatch of Volunteer). Koica has provided a total of 140.77 million US dollar in support to Nepal through its various kinds of assistance programs from 1991 to 2018.

Issues of Public Procurement in Nepal
8 hours ago