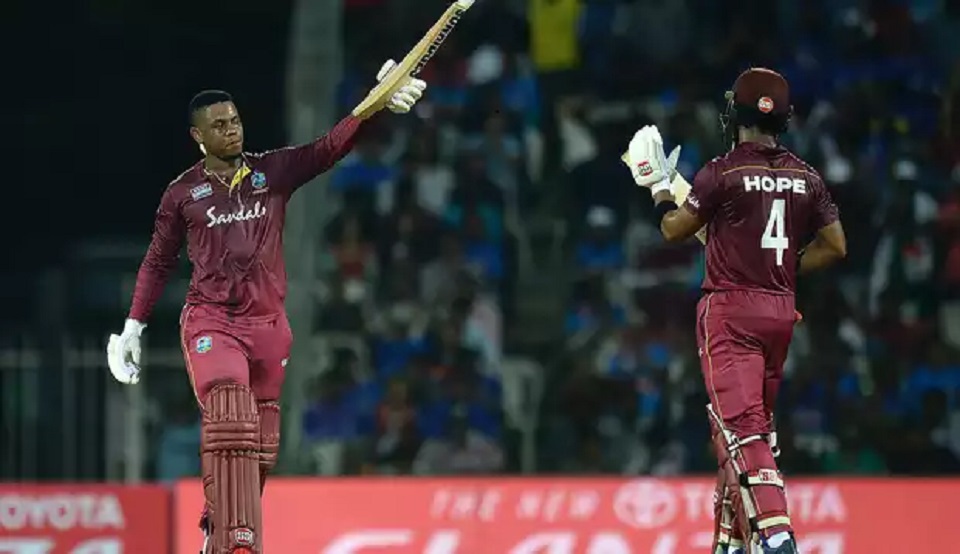 Kathmandu, Dec 17:  On the back of a series loss in the recently concluded T20 series to the hosts, the West Indian team inspired by a strong captain in Pollard, and game winning hundreds from Shai Hope and Shimron Hetmeyer, managed to shock the home team and the stun the crowd at a packed M.A Chidambaram stadium, in Chennai on Sunday.

In the first of the three-match ODI series against India, the Islanders registered an impressive eight-wicket victory and managed to finish the game with 13 balls to spare. The hosts, asked to bat first, struggled initially with the bat upfront but a fortuitous yet mature fifty from Rishabh Pant who was dropped early on in his innings and a steady fifty from the stylish Shreyas Iyer, put on a strong middle order show - to post a competitive but slightly less than par total of 287 for 8 after the allotted 50 overs.

India found themselves up against the ropes relatively early on in their innings as Sheldon Cottrell used his lethal slower deliveries to good effect to send back both KL Rahul and captain Kohli in the seventh over with his trademark 'Salute' celebrations to boot, to give the West Indians the ideal start. It was an exceptional first spell from the left-arm pacer, whose five overs included three maidens and only 12 runs for two wickets, as India could manage only 33 in the first 10 overs of the game.

After Rohit Sharma was dismissed after being late on the pull for 36 by a sharp short delivery from his Mumbai Indian compatriot Alzarri Joseph, the Indian team had to rebuild their innings through Pant and Iyer. With Rishabh Pant forced to tone down his aggressive game he assisted Iyer in building a productive partnership, as the fourth wicket pair extended the partnership past 100.

Pant must have thanked his lucky stars when he hit a full delivery from Kieron Pollard straight to cover where Cottrell put down the easiest of chances to give the diminutive left hander a reprieve. But after doing all the hard work both wickets fell in quick succession. That left the finishing job to India's all-round options of Jadhav and Jadeja to take over.  With Kedar Jadhav playing the role of the aggressor in a breezy fifty-run partnership, he struck three fours and a six while Jadeja hit two boundaries before both fell off successive deliveries in the 48th over. Although India managed 18 in the last two overs to finish on a high, they fell a few runs short off what most considered a par score for the innings.

West Indies needing 288 to win recovered from Sunil Ambris's early dismissal - when he was trapped in front by Deepak Chahar - to get their chase off to a good start.  Shai Hope played the anchor's role and carried his bat all the way to the end, while Hetmyer handled the job of finding the boundaries regularly, to ensure West Indies always had the required rate under control. Having edged Mohammed Shami a couple of times for boundaries early on, Hetmyer looked a lot more in control when he took on the might and strength of the Indian bowling attack - spinners, hitting Jadhav for a couple of fours before sending a Kuldeep Yadav delivery over the long-on fence for his first maximum to get his spectacular innings going.

Soon after going past fifty, Hetmyer took on Ravindra Jadeja - who had already bowled three quiet overs for 10 runs - for two successive sixes to extend the partnership past 100.

The most impressive detail about Hetmyer's astounding innings was the fact that he put the Indian bowlers under immense pressure with boundary hitting and going over the ropes at will, while Hope was happy to play second fiddle from the other end, focusing on keeping his wicket and getting his partner back on strike. Even the most impressive of the Indian bowler's Shami, in his comeback spell, was struck for a six by Hetmyer, the left hander was in stupendous form as he showcased an array of shots to take his stock very high just ahead of the lucrative IPL auction and continued his fine ODI form registering his 5th ton in the process.

The partnership crossed 200, only the third such instance for West Indies against India in ODIs.

Shreyas Iyer finally held on to a catch in the deep to send back Hetmyer for 139 off 106 balls and give Shami a wicket, but the extent of damage done by the left-hander had left West Indies with a comfortable equation. Hope and Nicholas Pooran had the rest of the chase under control. Hope registered his eighth ODI hundred with a six and a four off Chahar while Pooran finished the innings off with a couple of boundaries off Shivam Dube as West Indies pulled off the highest successful chase at Chepauk.

Whether it was for a lack of front-line bowlers for the Indian team or the lack of application shown by their top order batsmen, the Indian team definitely has a tough task of finding the answers and turning the series around quickly. The 2nd match of the series takes place on Wednesday 18th December in Vishakhapatnam at 13:45(NST).