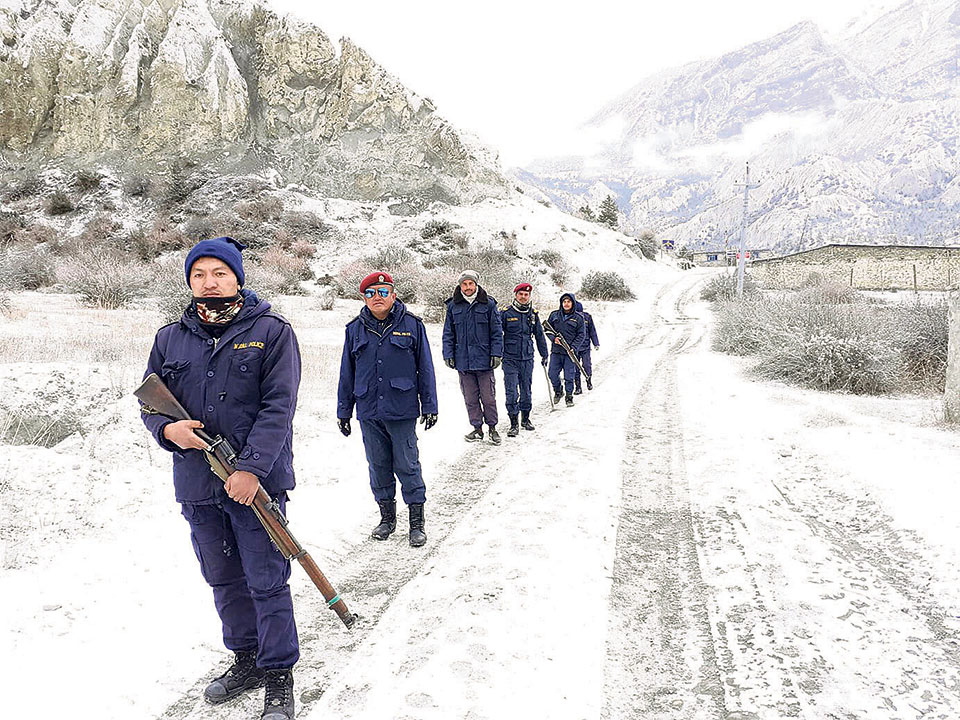 Nepal Police personnel patrolling a snowed-out Humde area in the upper part of Manang district on Thursday. The upper parts of Manang are seeing snowfall since Wednesday evening. Photo: Republica

POKHARA, Dec 13: The upper areas of Manang district witnessed snowfall on Thursday. The first snowfall of the season has sent the temperatures down and rendered life difficult for the locals.

According to DSP Tika Bahadur Karki, the chief of District Police Office, Manang, the snowfall started from Wednesday evening. “The temperature dropped significantly on Thursday morning. Upper parts of Manang including Disyang Rural Municipality and Napa Bhurmi Rural Municipality are all white,” Karki said, adding that the snowfall continued till 10 am Thursday.

“The chill has increased. The locals in the upper areas are especially affected,” he said, adding that the snowfall occurred above the altitude of 3,200 meters.

Karki further added that a team of police has been mobilized at Humde Bazzar in Disyang Rural Municipality-4 after the snowfall to help the locals if needed.

The snowfall has not obstructed vehicular movement in the district.

The number of trekkers in the Annapurna circuit has also declined markedly since the past few weeks, according to DSP Karki. “The number of tourists has declined significantly as the area is prone to heavy snowfall this season.”

According to the meteorologists, the temperatures have dropped across the country due to the westerly winds. The upper hilly and mountainous regions have witnessed snowfall on Thursday.

Meanwhile, the Department of Hydrology and Meteorology has said Friday will be mostly cloudy throughout the country, and rainfall is likely in some places. Likewise, upper mountainous regions could see heavy snowfall Friday, according to the department.

POKHARA, Feb 6: Following heavy snowfall in Manang district, human mobility has been restricted as most of the roads and... Read More...

HUMLA, Nov 4: Snowfall began in various parts of Humla this morning. The first snowfall of the year began at... Read More...

I have no involvement in making Hamal a minister: Chief Justice Rana
18 hours ago

Over 100,000 Pfizer vaccines to arrive in Nepal on Monday
19 hours ago

Substation at Nawalpur comes online, electricity supply expected to be reliable
22 hours ago

Agreement between Nepal Tourism Board and India's TAAI
2 hours ago

Jeep crash in Dolpa: 9 injured, 3 in critical condition
1 hour ago

Canadian citizen busted on the charge of pedophilia
1 hour ago

Danish tourist dies at Makalu base camp
2 hours ago