The business side of Tihar 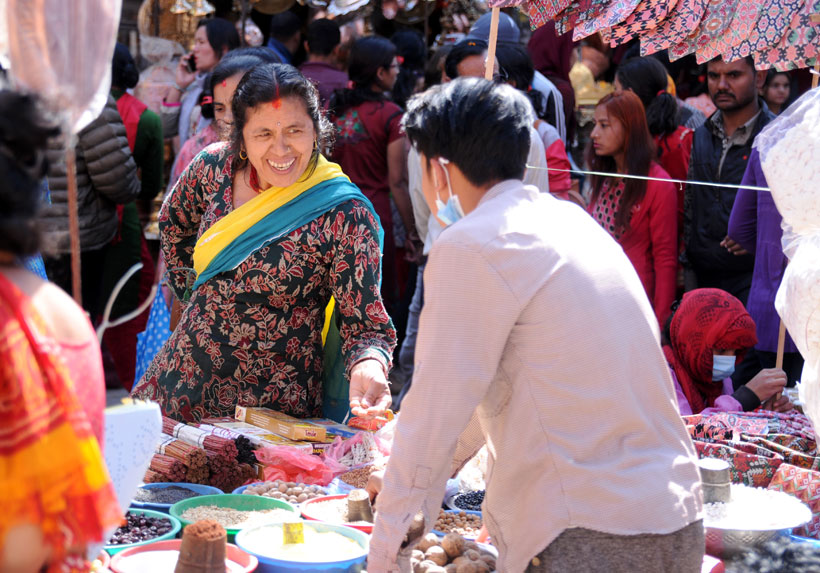 Sudha Tamrakar loves the days leading up to Tihar especially because this is one time of the year when she doesn’t have to worry about making enough money. Tamrakar, who makes her living by selling small bouquets of flowers for worship early in the morning at Mangalbazaar, says that during Tihar she earns enough to buy her two children new clothes and toys that she couldn’t afford during Dashain.

“I like Tihar because I don’t have to call out for customers. They come to me,” says Tamrakar with a shy smile. She confesses that during the other times of the year her earnings are around Rs 200 – 500 but during Tihar, up until Bhai Tika that is the fifth day of the festival, she earns five to six times that amount in a single day.

At New Road, where people throng during Dashain and Tihar, the vendors share similar stories. Saraswati Shahi, who otherwise sells salt and other condiments in New Road, adds earthen lamps during Tihar and confesses that she makes more by selling these than the regular stuff.

“I make around Rs 40,000 by selling earthen lamps during Tihar,” shares Shahi explaining that the small carved ones priced at Rs 25 per piece are the ones that sell the most followed by the bigger ones at Rs 100 per piece. Sharing her story, Shahi quickly adds that most people feel they are looting the public in the name of the festival but they don’t have huge profit margins in the items they sell, it’s just that they are priced really high by their suppliers.

Amala Dongol who has been selling dried fruits at Ason for the past four days now says that she sells around 200 packets a day and only makes Rs 2000 from it though a packet is priced at Rs 100. “My supplier at Kalimati charges really high and I can’t afford to have a large profit margin because then people won’t buy it,” she says.

Dongol, who lives in Balaju in a small rented room, gets to Ason by seven in the morning, gets her stash of leftover goods from her daughter’s rented room in the area and additional packets from her suppliers by eight and sets up shop. She laments that for all the hard work she does she definitely doesn’t make much. “Those who set up stalls and temporary shops on the streets have to pay a fee to the local committee,” she says adding that she pays Rs 200 per day to the committee and that will only increase day by day as Tihar approaches.

Contrary to popular belief, small business owners don’t make all that much during these festive times. Bishnu Lama, who sells brass and bronze utensils in Ason, says that business has been on a steady decline in the past few years. However, he confesses that business does pick up a bit during Tihar but it isn’t anything like before.

POKHARA, Oct 26: With the arrival of Tihar, sale of a traditional cap, popularly known as Dhakatopi in Pokhara is in... Read More...