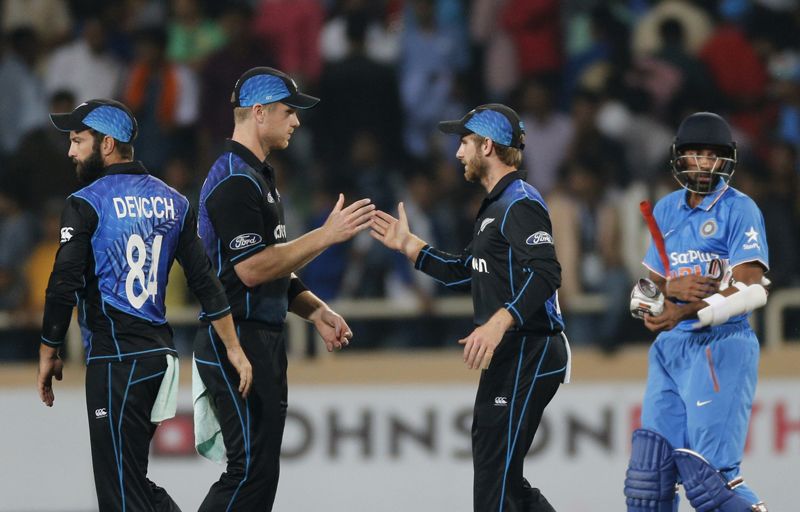 RANCHI, (India), Oct 27: A half-century from Martin Guptill helped New Zealand beat India by 19 runs in their fourth one-day international on Wednesday and level the five-match series at 2-2.

After opting to bat first, Guptill's top-scoring 72 runs off 84 balls helped New Zealand reach 260-7 before the hosts were bowled out for 241 runs in 48.4 overs.

"It was really pleasing that I put in a decent effort to get the team through a defendable total," said Guptill, who was coming off a disappointing series of scores. "I didn't think it would be the highest score of the match. But it was only halfway point and we needed to do a job."

He helped put 96 runs on the board with fellow opener Tom Latham (39) for the first wicket, and the momentum continued with captain Kane Williamson (41) and a useful 35 from Ross Taylor.

India made a sedate start to its reply, with Rohit Sharma (11) and Ajinkya Rahane (57) adding only 19 runs before Sharma was caught behind off Tim Southee (3-40).

Rahane then added 79 runs with Virat Kohli (45) as the chase gathered speed, with the 50-run mark coming up in the 10th over.

However, a turning point came in the 20th over, when Kohli was caught behind off a wide delivery from Ish Sodhi (1-52). Skipper MS Dhoni (11) then came to the crease and struggled to get going, putting on 30 runs off 45 balls for the third wicket with Rahane.

The opener went on to score his 16th ODI half-century off 61 balls, before being trapped leg before wicket to James Neesham (2-38), who subsequently bowled Dhoni.

The loss of the captain's wicket put immense pressure on the following batsmen, and a collapse ensued. Manish Pandey (12) holed out as Latham held an excellent catch at mid-on, while Southee trapped Kedar Jadhav (0) lbw the very next ball.

Hardik Pandya (9) then holed out in the deep off Mitchell Santner as India went from 128-3 to 167-7. The promotion of Axar Patel failed to deliver any decisive progress from there.

"Like in Delhi, we needed partnerships," Dhoni said. "We could have won the game if we had wickets in hand. But we kept losing them regularly. The youngsters will gain experience from these situations, and learn how to finish matches after going through such matches."

Patel added 38 runs for the eighth wicket with Amit Mishra (14), and both were dismissed in quick succession in the 43rd over.

Their late charge provided a platform for the last pair, Dhawal Kulkarni, who was unbeaten on 25, and Umesh Yadav (7), only for Trent Boult (2-48) to seal the outcome in the penultimate over.

"There had already been a game on this surface. So we thought it would slow down further. Dew hasn't really come in so maybe it favored us a little bit," Williamson said.

Earlier, New Zealand made a bright start before Latham was caught at short fine leg, top edging a sweep off Patel.

Guptill and Williamson put on 46 runs for the second wicket, with the opener reaching his 31st ODI half-century off 56 balls.

He was dropped twice by Mishra, first at mid-on off Umesh Yadav in the seventh over, and then at long off in the 23rd off Jadhav. Guptill was finally out caught behind off Pandya three overs later, while Williamson was later caught behind off Mishra (2-42).

Neesham (6) lobbed a simple catch to Kohli at cover, BJ Watling (14) was caught in the deep and Taylor was run-out by Dhoni, who deflected a throw from the deep onto the stumps.

Anton Devcich (11) chipped a catch straight to cover, while Santner and Southee attempted a late flourish, but only 99 runs came off the last 20 overs.

"It was an improved effort," Williamson said. "We wanted to build partnerships through the innings but it wasn't an easy surface to bat on. You always want more, but 260 allowed us to build pressure with the ball. The bowling effort was outstanding."

The final ODI will be played in Vishakhapatnam on Saturday. 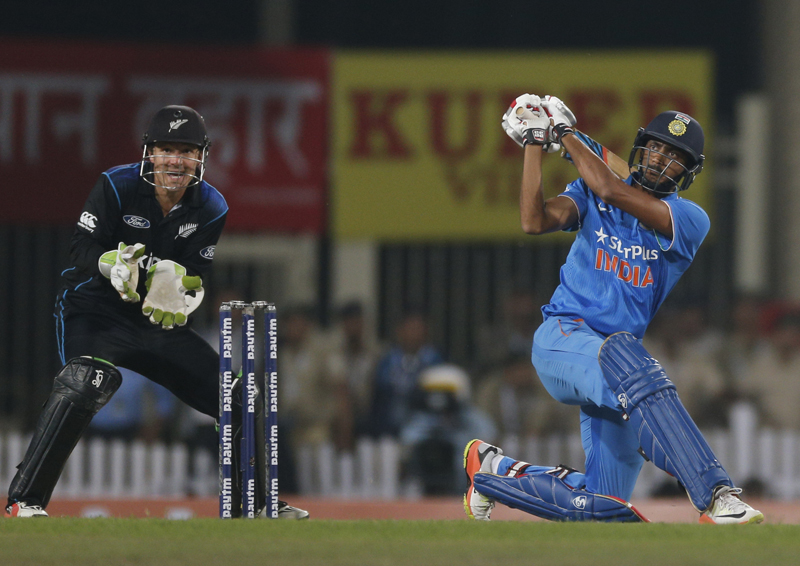