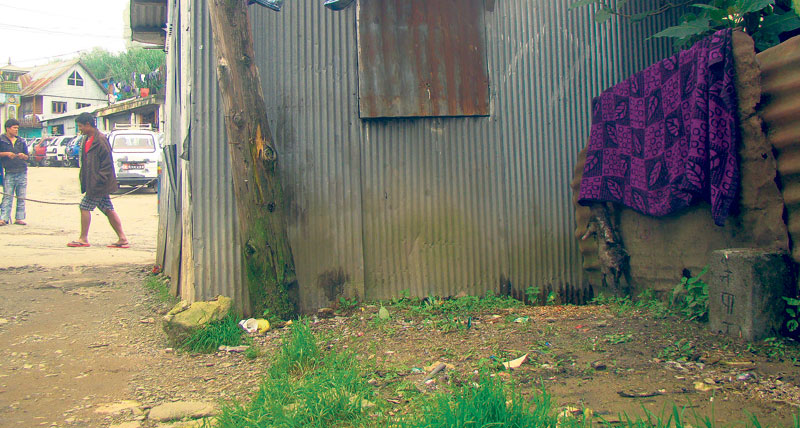 ILAM, Oct 27: Nepal's southern neighbor India, which has already built dozens of illegal structures in the Dasgaja area (no man's land) along the eastern border, has now started building a monastery encroaching upon the no man's land near Pashupatinagar-4 of Ilam district.

The Survey Department under the Ministry of Land Reform and Management has visited the reported site following information from the locals, police and the administration. Following an inspection, the department found that the no man's land has indeed been encroached upon by India.

Nepal and India are separated by 60 feet of no man's land. “Although both the countries are not supposed to build any structures in the Dasgaja area, we found that India has encroached upon it to build a Buddhist monastery,” said Chief Survey Officer Sushil Dangol, after inspecting the site.

“Not just the monastery, India has also set up its customs office, police post, and other 4-5 structures illegally in the Dasgaja area. They have also encroached upon the areas near the border pillars marked 71/6, 71/7, and 71/8,” he added.

According to him, India has demolished the old structure of Tashi Choling Gumba to build a new one. But the construction of the monastery encroaches on the Dasgaja area against the bilateral agreement between the two countries.

“The survey department has instructed me to submit the findings from the site visit. I'll submit the report as soon as I reach Kathmandu. A copy of the report will also be sent to the District Administration Office (DAO), Ilam,” said Dangol.

Gram Panchayat of India plans to construct a concrete monastery with an investment of about IRs 6 million, informed Buddha Tamang of the construction committee. Gorkha Territorial Administration (GTA) has provided financial assistance for the construction and GTA chief Bimal Gurung will inaugurate the monastery once the construction is completed, according to locals of Pashupatinagar.

“India is building the monastery encroaching upon the Dasgaja land citing its religious importance as well as its value from tourism aspect,” said Milan Chhetri, a local of Pashupatinagar. “They had planned to build it three months ago. However, they abandoned the plan after we pressurized them. But now they are again going ahead with the plan,” he added.

The construction committee's member, Tamang, said that the plan would not be abandoned now unless the Indian government explicitly intervenes.

Assistant CDO Fago said they will inform higher authority about the findings as soon as possible.

BANKE, May 10:  As India is constructing an embankment like road next to the no man's land, locals living across the... Read More...