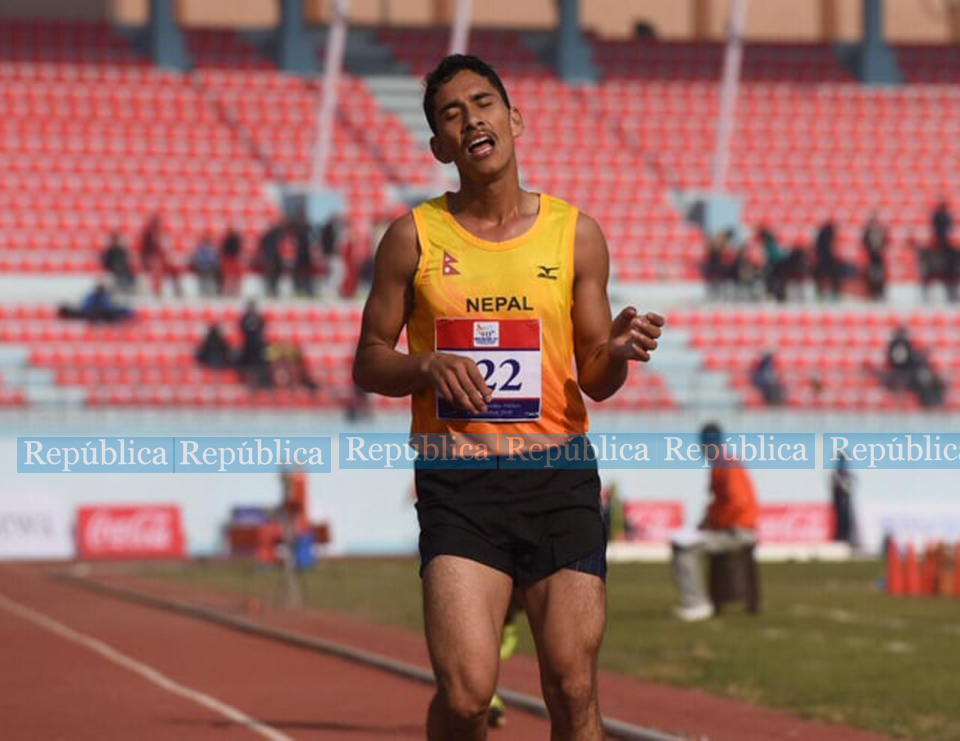 KATHMANDU, Dec 5: Nepal claimed just a bronze medal on the second day of athletics of the 13th South Asian Games (SAG) as India dominated yet again adding five medals to its four in Kathmandu on Wednesday.

At the Dasharath Stadium in Tripureshwar, Deepak Adhikari won the only medal of the day for Nepal in the men’s 10,000 meters category finishing the distance in 30:50.06 minutes.

The Nepali athletes could not shine in the other categories failing to add a single medal with most of the players finishing in the last position.

In men’s 200 meters final, Pakistan won its maiden gold medal of the day as Uzair Rehman finished the distance four seconds ahead of his closest competitor.

Rehman clocked 21.15 seconds, leaving Sri lanka’s Vinoj Suranjaya in the second place for the silver, who had the distance in 21.19 seconds.

Also, in the category, Aashish Chaudhary and Anand Dev Chaudhary were not able to qualify from the dash to the finals.

In the women’s 200 meters category, Saraswati Chaudhary finished in the eighth place as India’s Archana Suseent won the gold medal finishing three seconds ahead of her Pakistani opponent.

Pakistan’s Najma Parveen clocked 23.69 to win the silver medal, while India’s Chandralekha An covered the distance in 24.27 to claim the bronze.

Krisna Chaudhary of Nepal did not qualify for the finals.

Sher Bahadur Bist and Bhuvan Mahato of Nepal were the last two players of the standings in men’s long jump flashing a dismal performance from the Nepali athlete as they could not better the gold medal win by Santoshi Chaudhary and the silver by Tanka Karki on Tuesday.

India dominated the category as well with two of its players winning the gold and the silver. Lokesh Sathyana won the gold as she cleared the distance of 7.87 meters, while Swaminath Yadav was just 0.1 meter short to level with Sathyana.

Bangladesh’s Al Amin won the bronze medal with a throwing distance of 7.60 meters of the category, which saw Nepal’s Bhuvan Mahato finish in the seventh place with a distance of 6.76 meters.

Nepal’s Shila Chaudhary did pretty much the same as Mahato as she finished seventh in the women’s long jump.

Sri Lanka duo came better off than India in this one with crucial throws in the first two tries.

Sri Lanka’s Lakshini Sarang won the gold medal with a distance of 6.38 meters, while Anjani Uthpala covered 6.11 meters to win the silver. Likewise, Sandra Babu of India had a distance of 6.02 meters to finish third.

Chaudhary, however, clocked only 5.33 meters to finish sixth.

It was pretty much the same in men’s discus throw as two Nepali players finished fifth and sixth.
India’s Kirpal Singh BA was way better than his competitors in the category as he covered the distance of 57.88 meters to win the gold.

Likewise, his compatriot Gagandeep Singh had a distance of 53.57 meters to claim the silver, while Pakistan’s Shams Ul Haq finished third throwing to the distance of 44.31 meters.

Nepal’s Chitra Bahadur and Binod Rai covered 39.65 and 37.84 meters to finish fifth and sixth in the category respectively.

Similarly, Amrita Mahato was a bit of a let-off in women’s discus throw finishing fifth despite getting close.

India duo Navjeet Kaur and Suravi Biswas won the gold and the silver in the category. Kaur had a distance of 49.85 meters, while Biswas covered 47.31 meters. Likewise, Sri Lanka’s Ishara Madurang finished with bronze with a distance of 41.29 meters.