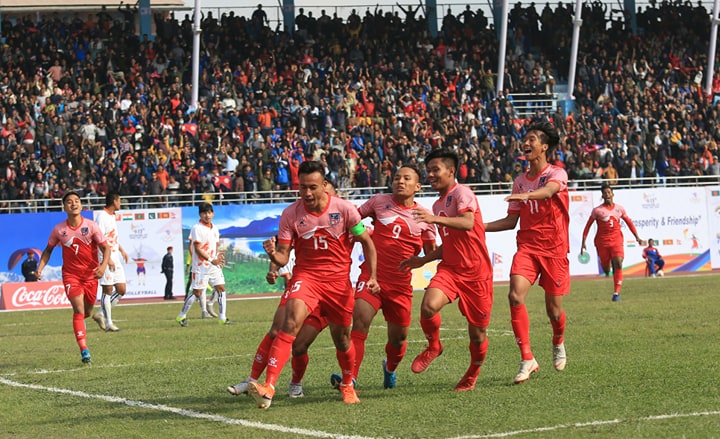 Nepal’s Sujal Shrestha (15) celebrates with his teammates after scoring a goal during the men’s football match of the 13th South Asian Games at the Dasharath Stadium in Tripureshwar, Kathmandu on Tuesday. Photo: Dipesh Shrestha/Republica

KATHMANDU, Dec 4: A brace from captain Sujal Shrestha helped Nepal register its first win in men’s football as the host surged past the Bhutanese challenge to get a 4-0 victory in men’s football of the ongoing 13th South Asian Games (SAG) on Tuesday.

In the third group match played at Dasharath Stadium in Tripureshwar, Shrestha scored in both the halves with under-performing forward Abhishek Rijal and Mikchhen Tamang scoring a goal each for the winning team.

Bhutan had no reply to Nepal’s sumptuous attack in the second half, with the host adding three to its first half tally of one.

Nepal opened the scoring in the sixth minute of the game as Rijal crossed the ball to Shrestha, who took one touch and guided the ball into the net with a clinical finishing, giving the Bhutan keeper no chance at all.

Nepal could not establish itself well with its passing and control as Bhutan pressurized the Nepali midfield with high pressing and was quick on the breaks. But, the away side, who registered its first win of the campaign with a 1-0 victory over Bangladesh a day ago, could not finish the chances it created.

Nepal started to build from the back after a constant Bhutan pressure, but failed to create threats from the long balls. It had no connection with the ball giving away most of the possession.

Nepal started to create chances as Sunil Bal hit a shot from the byline of the right side, but the ball just went over the bar in the 27th minute. Bal had another chance to prove himself for Nepal as he hit a free-kick in the 33rd minute, but center back Ananta Tamang’s header from point blank range was just off the target.

The second got way better for Nepal as it started pushing the Bhutanese line further down its own side with subsequent pressing and counter attacking tactics. There was control in the second period and the three goals it added was a sign of major improvement for the team.

Nepal utilized its chances pretty fast as Shrestha, playing with a static movement, delightfully lobbed the ball over the keeper in the 51st minute stunning the Bhutanese team.

After that, there was only going forward for the gold hopeful, who also beat India in the 2016 SAG to achieve the feat.

Nepal presented solid football after building from the back with the defense providing accurate long balls and fullback Bharat Khawas, working as a potent wide man.

Bikram Lama hit a free-kick in the 63rd minute, but a header from Suman Aryal just went over the bar.

Nepal scored its third goal three minutes later as Bal hit a free-kick from the right edge of the Bhutan pitch. Tamang provided a crucial header to Rijal, who banged the ball home with his head for a three-goal advantage for Nepal.

Bhutan had some chances to get a goal or two as Kinley Tenzing crossed the ball, but the header from Jigme Tshering Dorji went over the bar.

Bhutan had a better chance to get a goal back as captain Chencho Gyeltshen headed the ball from close range, but the shot was deflected off Khawas and the shot was saved by Bikesh Kuthu in the 68th minute.

Then, it was all Nepal. Nepal scored its fourth goal certainly putting the game to bed as Mikchhen Tamang hit a free-kick from the right side of the pitch and the ball flew over the hands of the Bhutan goalkeeper and hit the left top corner in the 78th minute.

Nepal will play its second group match against Sri Lanka on Wednesday.

KATHMANDU, Dec 7: Maldives has made a 1-0 lead against Nepal in the ongoing match of men's football at the... Read More...