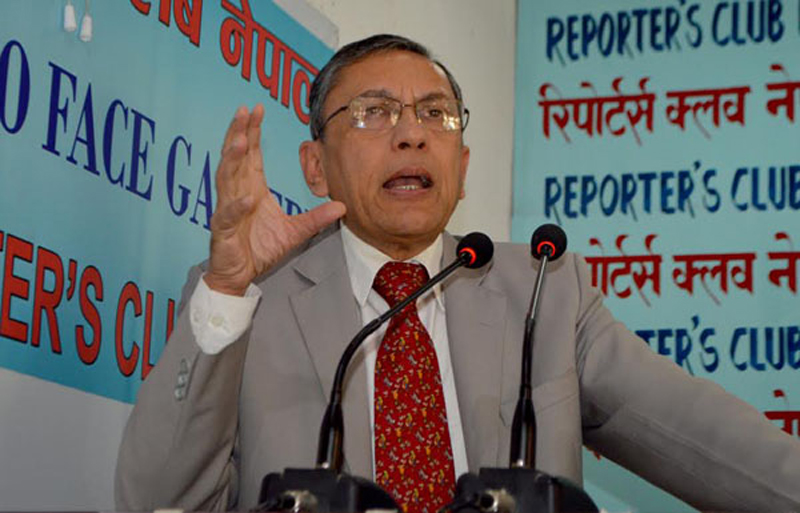 Lokman Singh Karki’s impeachment motion has again laid bare limitations of India’s misguided quest for ‘structural guarantee’
In his book On China, Henry Kissinger devotes a lot of time discussing the Chinese love for a board game. In the game of Go, which in Mandarin is translated as “encircling game”, the main strategy is, as the name suggests, to encircle your opponent so that he has no room for maneuver. Kissinger argues that this ingrained fear of encirclement greatly informs China’s foreign policy. So the autocratic China is forever fearful of possible encirclement by a concert of democracies.

But China knows that India, its chief geopolitical rival in South Asia, and increasingly even on the world stage, is incapable of encircling China on its own, however expansive India’s influence in the SAARC region. This is why it is uncomfortable with the growing strategic cooperation between India and the US, the two largest democracies in the world that increasingly work together to check China’s growing clout in South Asia.

For instance a joint statement issued at the end of the Second India-US Strategic and Commercial Dialogue on August 31st noted that, “The [two] Sides reaffirmed their commitment to work together as priority partners in the Asia Pacific and the Indian Ocean region”. Such language leaves no doubt in Chinese minds that India and the US are in it together in South Asia with the one and only goal of undercutting Chinese influence. This is also in keeping with the US ‘pivot’ to Asia announced in 2011, with South Asia at the crux of this strategy. And this is the lens through which the Chinese policy in Nepal has to be seen.

One mind
When the October visit of Chinese President Xi Jinping was cancelled following the untimely ouster of KP Oli, some saw it as a sign that India had once again beaten China in the oldest game in town. But it was only a temporary setback for China, which had been banking on Oli to implement Nepal’s recent agreements with it. That tactical defeat does not in any way change China’s long-term, two-part strategic objective: one, to gain a firm foothold in South Asia so as to counter the US-India duopoly and two, to get the South Asian countries on board its signature ‘One Belt One Road’ (or the Silk Road Initiatives) aimed at further integrating China into the global economy.

Hence China is forever vigilant about developments in Nepal. But unlike the Indians who have a habit of openly punishing its supposedly closest neighbor when it does not fall in line, the Chinese are more subtle when developments here are not to their liking. So even after President Xi had to cancel his trip to Nepal, China always maintained that the visit had only been postponed and would take place at an appropriate future date.

To be seen pursuing such nuanced and hands-off Nepal policy is to China’s advantage.

Particularly after last year’s border blockade, China’s stock in Nepal has never been higher. But why are the Indians so determined to give China a leg-up in Nepal?

Ameet Dhakal once quoted BP Koirala in Setopati as saying that what India wants in Nepal is ‘structural guarantee’. In other words, it wants to micromanage events here so that the country never slips out of its ‘sphere of influence’. It was this inferiority complex that made it install a puppet, in the form of Lokman Singh Karki, as the chief of CIAA, with the sole intent of hounding India’s critics in Nepal. But this kind of coercive diplomacy, as the Indians surely know by now, only contributes to anti-India sentiments in Nepal.

Indian Ambassador Ranjit Rae’s last-minute exertions to save CIAA chief Karki were pathetic to witness. Why an aspiring global power has to resort to such base tactics is unclear. But what it does suggest is that the Indians have no long-term plans for Nepal, over and above maintaining a vice-like grip over Kathmandu, an impossible goal in today’s globalizing world.

This is not to argue that the Chinese are saints and they are motivated only by the good of the Nepali people. Just like India is looking to protect its interests in Nepal, so are the Chinese. The difference rather is in their style of diplomacy.

Chinese leaders, perhaps because they are freed from the compulsions of electoral politics, can think long-term, which is also reflected in their diplomacy.

The Indian establishment, on the other hand, seems to be a perpetual slave of electoral politics. It’s saber-rattling against Pakistan post Uri attacks and the swiftness with which it sought to ditch SAARC has a hardnosed electoral logic. For India it makes perfect geopolitical sense, too. One of the main Indian gripes with SAARC of late was the way countries like Nepal and Pakistan wanted greater role for China in the regional forum, with Pakistan openly pitching for China’s full membership during the last SAARC summit in Kathmandu in 2014.

Trading advantage
But the best way for India to keep China at bay in South Asia would be to do more business with small countries in the region. For instance if Nepali goods get unrestricted entry into Indian markets, Nepal would be more than happy to do business with India, with its large, easily-accessible markets. But India continues to place many restrictions on goods of Nepali origin, demanding the kind of quarantine facilities and quality certificates that even its own products will struggle to get. Earlier this year India had inexplicably blocked import of Nepali ginger, one of Nepal’s rare export success stories.

Partly as a result of the many restrictions India has placed on Nepali goods, Nepal’s trade deficit with India has ballooned to Rs 447 billion, while its exports to India are a dismal Rs 39 billion. So why wouldn’t Nepal look to trade more with other countries, especially the business-minded Chinese?

Meanwhile, Lokman Singh Karki’s impeachment motion has once again laid bare the limitations of India’s sledgehammer diplomacy and its misguided quest for structural guarantee in Nepal. The largest democracy in the world seen trying to protect the biggest threat to democracy in its close neighbor—and the unprecedented anti-India sentiments it has fomented—suggests that India’s Nepal policy is in need of thorough revision. Perhaps time to take a leaf out of the new Red Book on diplomacy.

WhatsApp is restricting the ability of users worldwide to forward messages as viral hoaxes on its platform continue to be blamed... Read More...

Work halted due to lack of construction materials, increasing Nepal’s financial liability by Rs 15 million a day
10 minutes ago