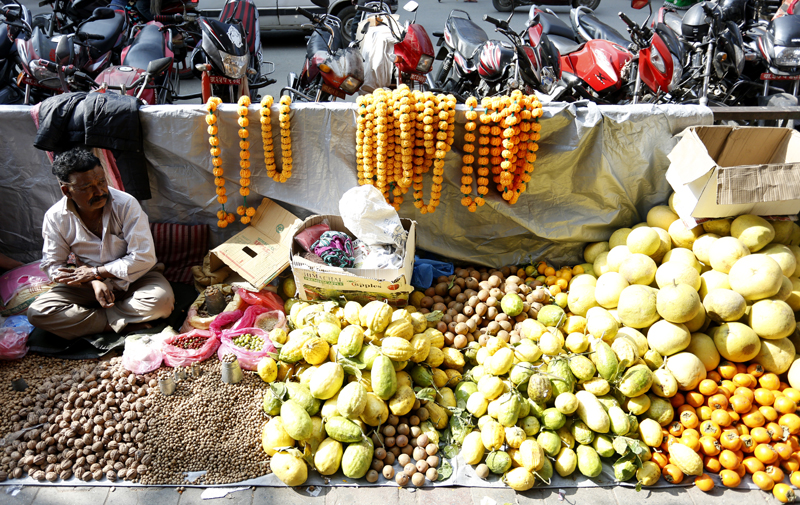 As you celebrate Tihar you should know if the fruits you consume are healthy
Tihar, the most celebrated festival in Nepal after Dashain, is marked differently in different places. But this festival holds special significance for farmers across the country. For this is the time to harvest rice and start planting wheat. This festival also marks the end of the harvest season of apple. Harvest of citrus fruits like mandarin orange, tangerine and lemon starts with Tihar. Dry fruits like chestnut, walnut, almond, pistachio, raisins and cashew nuts are also sold and consumed the most during this festival. On the first day of Tihar, I would like to dwell on where these fruits are grown and what the customers need to know while buying and consuming them.

Walnuts and almonds are cultivated in Nepal. Local people collect wild chestnut fruits for Tihar and sell them in nearby markets. People collect chestnuts that fall on the ground, as monkeys and birds compete with humans to get their share. Harvesting or collecting of chestnuts is done during September-October when the burrs open and release the fruits.

When the fruits reach maturity, the burrs turn yellow-brown and split open in two to four sections.

Walnut is grown in the mountains with an elevation of 1,000- 4,000 meter. Walnut trees are large, with older trees having significant trunk diameter. They often have deep roots which give them a distinct advantage in stress tolerance. The actual nut—and the tree species itself—have a wide diversity and the size and shape of nuts vary depending on the region.

Almond is another dry fruit grown on a small scale in Nepal. But it has huge potential to grow all over, mainly in the high mountains. Almond trees are wonderfully small and compact, ranging from 15 to 30 feet tall. Almonds develop inside small fruits (much like the pit in a peach). An almond tree can produce almonds from the fourth year of plantation and it generally survives for 12 to 15 years.

But more than 90 percent of dried fruits sold in the market during Tihar are still imported.

Nepal imports these fruits from India, China, Pakistan, Afghanistan, Iran, Indonesia, Brazil and the US. Sales of dried fruits jump five-fold during this festive season because there is a tradition of sisters presenting dried fruits and chocolates to their brothers on the day of tika. Other Tihar fruits include apple, banana, orange, Junar, pumelo, grapefruit, citron and pomegranate. Nepal is a paradise for these fruits, which can broadly be grouped under three categories.

Mandarin, sweet orange, lime, lemon and citron fall under citrus group. Most of them are native to Nepal and are seen in the markets during Tihar. These fruits are commonly grown in the mid-hills. In fact, citrus fruits of the mid-hills have assumed a critical mass needed for sustainable business. And 339 pockets of citrus in 51 districts have already been developed. Within citrus, mandarin is the main fruit in terms of production and area, followed by junar and lime.

Winter fruits include apple, pear, walnut, almond, peach, plum, apricot, persimmon, and pomegranate. Improved cultivars of these fruits have been introduced to all districts of the mountain region.

Kiwi fruit is rapidly emerging as a commercial fruit crop in the mid-hills. This crop can be cultivated in the mountain regions below the line of apple farming areas and above the line of mandarin orange areas where Nepali farmers are raising their traditional crops like finger millet (kodo) and maize (makai). So how should you decide which fruit to buy?

You should avoid shiny red apples because such apples could be waxed and/or injected with saccharin or sugar. Nepali consumers prefer red and sweet apples and yellow bananas. Calcium carbide, ammonia or sulphur dioxide are used to ripen the bananas fast. The bananas might also be repeatedly sprayed with pesticides. If consumed, such chemicals may damage the nervous system, kidneys and liver.

Artificial colors are commonly used to make apple shiny red or turn bananas yellow to make these fruits more appealing. You should think twice before buying such fruits.

Traders could be selling artificially colored fruits, regardless of health effects on consumers. Thus concerned government agencies should start the monitoring of fruit markets at the earliest. Consumers should also be aware that the fruits they are buying could be poisonous.

BHAIRAHAWA, June 24: Following the government’s decision that fruits and vegetables will be allowed entry into the country only after... Read More...

780 foreigners repatriated in a single day
7 hours ago

How Democracies Can Beat the Pandemic
8 hours ago

Nepal in second stage of COVID-19 transmission
9 hours ago

14-day quarantine period is not enough to prevent spread of COVID-19: MoHP
18 hours ago

14-day quarantine period is not enough to prevent spread of COVID-19: MoHP
18 hours ago