VNY logo to be displayed on Burj Khalifa, other skyscrapers 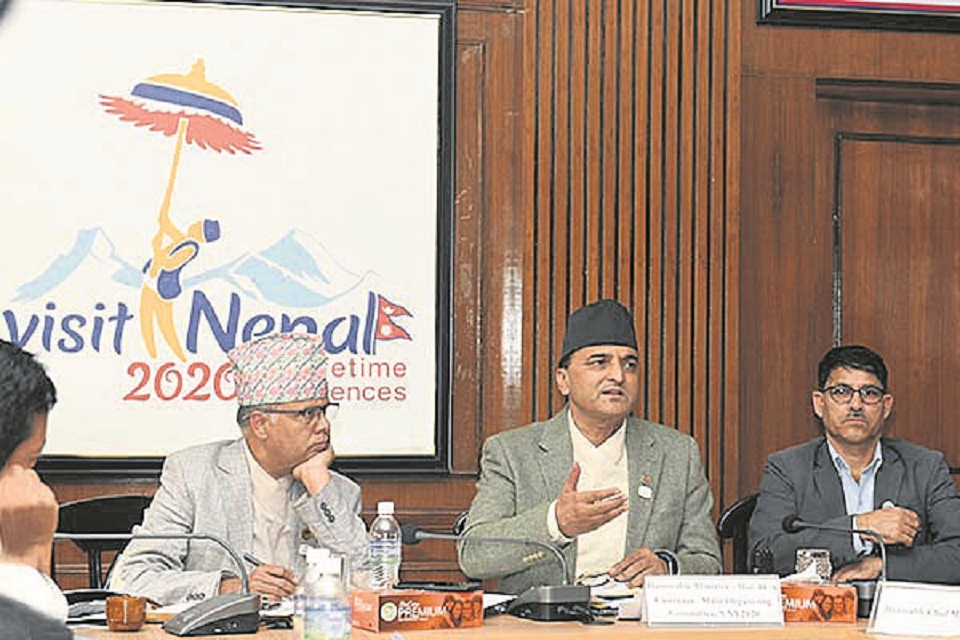 KATHMANDU, Nov 26: The government has decided to work with non-resident Nepalis (NRNs) and Nepali missions in different countries to display logo of Visit Nepal Year 2020 campaign on Burj Khalifa and other skyscrapers around the world.

The fifth meeting of the Organizing Committee of Visit Nepal Year 2020 held at the Ministry of Culture, Tourism and Civil Aviation (MoCTCA) on Monday took the decision. Members of organizing committee, chief ministers of different provinces and provincial tourism ministers, among others, were present in the meeting.

Speaking at a press meet in Kathmandu on Friday, Minister for Culture, Tourism and Civil Aviation, Yogesh Bhattarai, had said that VNY will be inaugurated in all seven provinces of the country on January 1, whereas the international inauguration is scheduled for January 7 in Nepali embassies and diplomacy missions around the world. Sharing work progress of the campaign, Bhattarai told the press that the yearlong campaign was being promoted through different international media outlets.

The meeting also decided that all provincial assemblies will notify the VNY 2020 Secretariat about their preparations for the inauguration of VNY 2020. The federal government plans to inaugurate VNY 2020 by organizing a special function at Dasharath Stadium in Tripureshwar on January 1. The yearlong campaign will be inaugurated by President Bidhya Devi Bhandari, while Prime Minister Khadga Prasad Oli is scheduled to address the event, according to the ministry.

The VNY 2020 Secretariat will make promotional collateral available at Tribhuvan International Airport so that students and migrant Nepali workers will take them to the destinations that they are heading to. They will be requested to hand over the souvenir to head of their colleges or CEOs of their employer organizations, according to an official of VNY 2020 Secretariat.

The meeting also decided to include logo of VNY 2020 in package of different Nepal-made products. According to the secretariat, the government will also initiate beautification of public places to provide pleasing experience for tourists in coordination with different local units.

"We have also invited popular celebrities and athletes to attend the inauguration ceremony," Minister Bhattarai added.

Speaking at the meeting, Chief Minister of Sudurpashchim Province, Trilochan Bhatta, said lack of infrastructure will be challenging. He also drew the attention of Minister Bhattarai toward expensive airfare to airports in his province.

Similarly, Ishwar Raj Paudel, director general of Department of Immigration, said preparations were underway to play promotional videos of VNY 2020 campaign in in-flight entertainment system of aircraft 15 minutes before the land at TIA.

NAC to use VNY logo in all its aircraft

KATHMANDU, Nov 25: Nepal Airlines Corporation (NAC) has decided to use Visit Nepal Year (VNY) 2020 logo in all its... Read More...

In the UK, it would not have been possible to appoint a speaker who was under investigation for serious allegations

Nepal-UK relations go back to centuries and the UK remains Nepal’s one of the largest donors and development partners. At... Read More...

POKHARA, Oct 27: Tourism entrepreneurs of Pokhara say that they are disappointed by foreign tourist footfalls this season. ... Read More...