In bid to repair ties, Japan and South Korea agree to summit next month 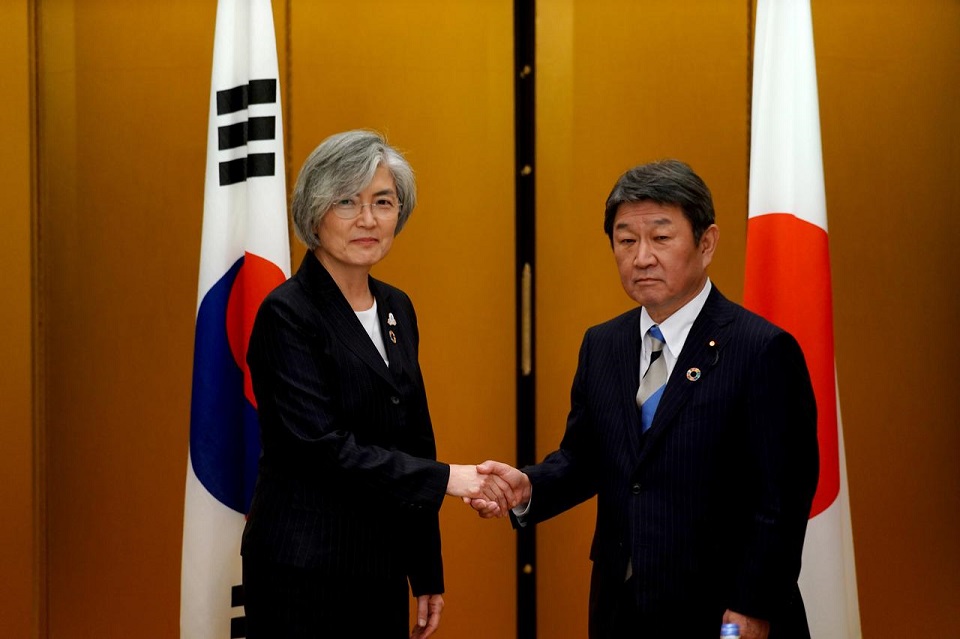 NAGOYA, JAPAN, Nov 23: Japan and South Korea agreed on Saturday to hold formal talks next month, taking a step towards improving relations strained by decades of bitterness over their wartime past and now exacerbated by a simmering trade dispute.

The decision to return to the table came a day after Seoul made a last-minute move to stick to an intelligence-sharing deal with Japan. Seoul on Saturday hailed its own move as a “breakthrough” after months of worsening relations.

Yet neither side gave any sign of a fundamental shift in stance, meaning that their feud will likely remain as intractable as it has been for the half century since the two U.S. allies normalised ties.

The feud is rooted in a decades-old disagreement over compensation for South Korean labourers forced to work at Japanese firms during World War Two. Seoul has seized local assets of Japanese companies and Tokyo this year curbed exports of materials used to make semiconductors.

“We bought time for intense discussions, but there’s not much time left for us,” South Korea’s foreign minister, Kang Kyung-wha, told reporters.

She was speaking after meeting her Japanese counterpart, Toshimitsu Motegi, at a gathering of the Group of 20 (G20) foreign ministers in the central Japanese city of Nagoya.

Motegi had earlier said that he wanted to discuss the issue frankly.

“I aim to hold a candid exchange of views on the matter of labourers from the Korean peninsula, which is the core problem, and other bilateral issues,” Motegi told reporters in Nagoya.

Tokyo has been frustrated by what it calls a lack of action by Seoul after a top South Korean court ordered Japanese company Nippon Steel to compensate former forced labourers. Japan says the issue of forced labour was fully settled in 1965 when the two countries restored diplomatic ties.

South Korea’s Kang acknowledged that “the gap was very big” between the two countries over the issue of forced labour.

In her meeting with Motegi, Kang also repeatedly stressed the need for Japan to withdraw the export curbs. South Korea’s chip industry is heavily reliant on specialised chemicals produced by Japan and now impacted by tighter trade restrictions.

South Korea made a last-minute decision on Friday to stick with its General Security of Military Information Agreement (GSOMIA) intelligence-sharing pact with Japan. The agreement was set to expire at midnight on Friday and South Korea had earlier indicated it would let it lapse.

The decision was welcomed by Washington, which had pressured its two allies to set aside their feud and maintain the pact, seen as linchpin of trilateral security cooperation.

It was not immediately clear how much of a role Washington played in bringing the sides together.

When asked if Washington had helped push South Korea toward its last-minute reversal on the intelligence-sharing pact, a senior official at South Korea’s foreign ministry told Reuters that it was a result of the three countries’ close discussions, without elaborating further.

At a bilateral meeting with U.S. Deputy Secretary of State John Sullivan on Saturday, South Korea’s Kang asked Washington to play a “constructive role” in resolving issues with Japan, according to the South Korean foreign ministry.

SEOUL, Oct 1:  A South Korean fighter jet conducted a patrol flight on Tuesday over islands at the centre of a... Read More...