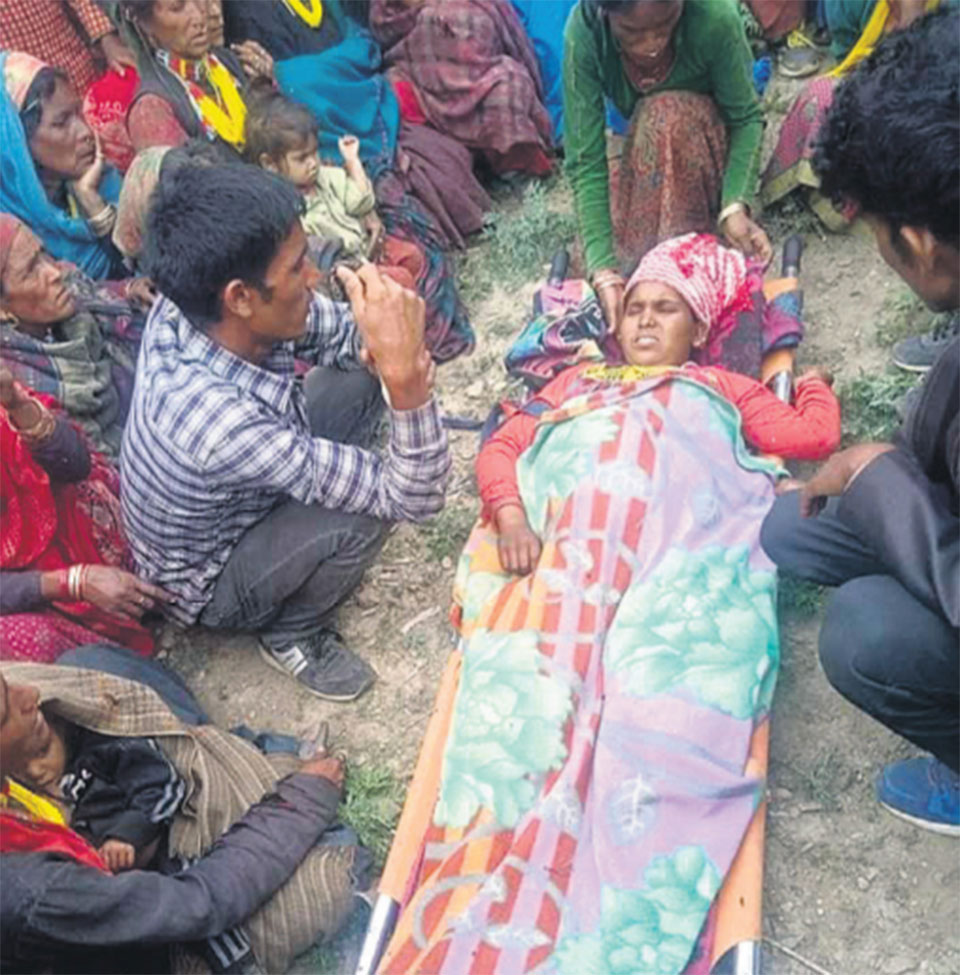 An expecting mother of Swamikartik Rural Municipality-1 awaits to be airlifted in this recent picture. Photo: Krishna Oli/Republica

BAJURA, Nov 12: Rejina Nepali, who gave birth to a healthy baby at the Chhatara Health Post in Bajura district on November 2, died six hours after the delivery at the health post. That was the fourth child of the deceased, a local of Bishan Bazar, Chhatara. Her family members have blamed her death on the 'health post's negligence'.

"It is clearly the negligence of the health post. She had given birth to a healthy baby and she was fit and fine after delivery. She even consumed milk and biscuit after delivering the baby," said one of her family members. "We are not clear what took her life, we feel that there is something fishy going on here at this health post," she added.

ANM at the health post involved in the case Sumitra Upadhyay admitted that there were no delivery complications. Everything had gone pretty smooth. "She gave birth to a healthy child, without any complication. She even ate biscuit and milk after delivering baby," said Upadhyay. "But afterward, she developed complications and died on the hospital bed," she added.

Basanti Nepali, 21, of Jilli village of Badimalika Municipality – 7 had delivered still baby at the district hospital on August 21. Two hours after the delivery, she breathed her last. According to the doctor involved in her treatment, Dr Tika Rai, both the baby and the mother died because of infection. Rai has already left the hospital following the enforcement of the Employee Adjustment Act.

Family members of Nepali were told by the hospital authority that she did not come for regular health check up. She did not take necessary counseling and that posed threat to her life.

"There was not enough blood in her body. She did not come for regular check up. Sometimes, pregnant women die due to lack of awareness," said information officer at the hospital Kul Bahadur Rawal. "In that particular case, there is absolutely no mistake of the hospital. We tried our best to save her," he added.

Rawal stated that Basanti could probably be saved if she had reached the hospital on time. "She came to the hospital a week later than she was told to. It was negligence on the family's part," he stressed.

The kin of the deceased remain unconvinced though. They claim that the lack of care at the hospital took her life.

"Yes, she had come to our hospital following some health issue. She was given treatment, but she died," said Dr Rup Chandra Bishwokarma. "A patient of high blood pressure, sometimes can collapse suddenly," he added.

Bohora had given birth to a baby two years earlier through C section surgery. She was supposed to come to hospital for regular pregnancy checkup but had not. When she was brought to the hospital, it was for ailments related to high blood pressure.

"Health awareness is very poor in our society. And that prevents people from visiting hospital on time. When things go wrong, patient's relatives put all the blame on doctors and hospitals," said Dr Tikaram Rai, one of the doctors involved in Bohora's treatment.

Rai stated that the doctors tried doing everything they could to deliver the baby. They even used vacuum for delivering the baby. However, neither the baby nor the mother could be saved. "We could not save the mother as she was suffering from very high pressure, and then baby's heart started beating too," he said.

Even though the government has prioritized safe motherhood and opened birthing centers even in remote places, apart from free delivery services provided by government run hospitals and health posts, people's faith in such institutions is shaken when mothers and babies die at these service centers.

On the other hand, authorities concerned complain the lack of human resource as well as infrastructures at these centers. These, they claim, affects their ability and the quality of services provided. This fiscal year alone, death of three women at health centers has been taken in negative light by the general public.

Bajura and Humla covered in snow