The provocateur: A relentless lawyer turns legal tide against Karki 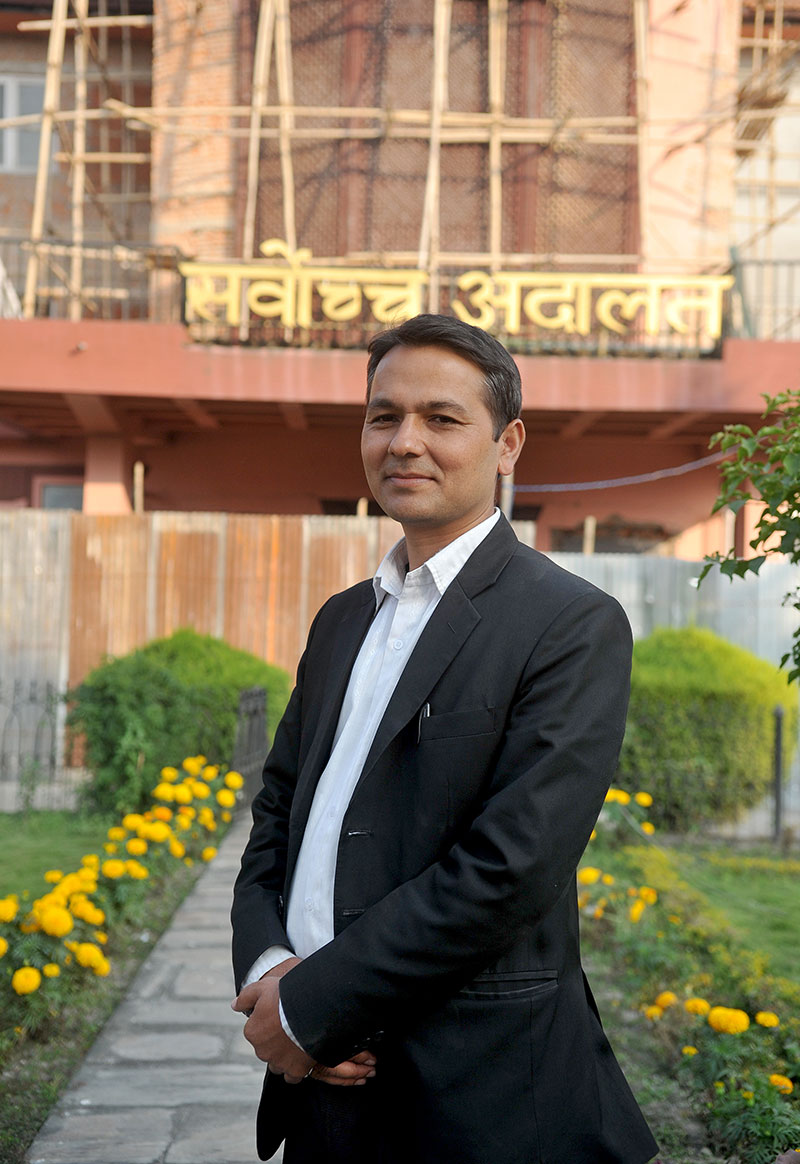 #Profile
KATHMANDU, Oct 24:  “I came to Kathmandu to study music,” says Om Prakash Aryal, 40, with a smile. Born in Amarpur, Gulmi, Aryal completed his schooling at a local public school and came to the capital in 1995. Upon learning that he did not have good enough marks in English to enroll in music studies at Ratna Rajya Campus, Aryal decided to study law at Nepal Law Campus right next door. His grandfather was a junior official in the judicial service, and his father a retired Indian army serviceman.

Aryal, now a Supreme Court advocate, has been in the news lately. His recent supplementary application at the apex court seeking a halt to the pay and perks for suspended CIAA chief Lokman Singh Karki has renewed public interest in the man who filed a writ petition on March 20, 2013 calling for annulment of the decision by the High-Level Political Committee (HLPC) to recommend Karki as CIAA chief.

While still a student, Aryal had a rare opportunity to fight a case at the Supreme Court concerning a demarcation dispute between two villages in Gulmi. Though he lost the case, the experience helped to shape him. He came away convinced of the need for public litigation to right the wrongs of the past.

Aryal went on to file public litigation seeking to revoke the facilities provided by the state to the hereditary rulers of Bajhang, Mustang, Jajarkot and Sallyan. The court rejected the plea, arguing that such princelings had made historic contributions to the state.

He also filed many  habeas corpus writ petitions at the height of the Maoist insurgency, at risk to his own life.

Aryal was working at the National Human Rights Commission during  the Popular Movement-II. He saw up close the brutality of the then government, whose chief secretary was Lokman Singh Karki.

He feels that even if he had not challenged Karki's appointment, someone would ultimately have. But he was there at just the right time.

But Aryal’s struggle began way back when Pushpa Kamal Dahal proposed sitting chief justice Khil Raj Regmi for leading the government to hold the election to the second constituent assembly. Dahal floated the idea  during a party meeting at Hetauda on February 8, 2013.

Aryal then filed a writ petition at the Supreme Court on February 26, 2013, arguing that the idea of the chief justice heading a government violates the principle of separation of powers and goes against the spirit of the constitution.

The petition was scheduled for discussion on March 14, 2013, but Khil Raj Regmi took the oath of office the same day. This, in Aryal’s view, meant the end of the separation of powers between the judiciary and the executive. He felt that that particular moment was a point of no return for the ditching of separation of powers. That same day, he filed another writ petition calling for annulment of the order removing any constitutional obstructions to Regmi's appointment  and for the issue of another order to stall that appointment. On March 18, 2013, the Supreme Court did issue an interim order stating that the chairman of the council of ministers should refrain from introducing himself as chief justice. But the order remained silent about the legality of his appointment.

Regmi’s government started work on appointing Lokman Singh Karki to the CIAA. The HLPC on March 17 decided to recommend Karki to head the CIAA. Aryal promptly filed another writ petition on March 20 asking to void the HLPC recommendation. On March 22, the single bench of Justice Sushila Karki issued an interim order not to appoint Karki. But on April 29, a double bench of Girish Chandra Lal and Tarka Raj Bhatta dismissed the writ, describing it as premature, and did not go into the need for a high moral standing for the position of CIAA chief. The bench also counted in Karki’s service at the royal palace, which meant he had more than the 20 years of public service needed to qualify for the job. It further said that the Constitutional Council would look into the moral standing of the candidate. However, this council recommended Karki on May 5, 2013, without holding any formal discussions on Karki’s eligibility or his moral character.

Aryal was also among the 18 members of a civil society delegation that meet President Ram Baran Yadav in the evening of May 6, 2013 over Karki's appointment. The president promised to at least delay the appointment. But Karki was hastily sworn in early the next morning.

On May 10, 2014, the Supreme Court overruled the court registrar’s order not to entertain the writ petition.
Aryal then filed a supplementary application on May 12, 2014 challenging Karki's appointment. Hearings were postponed multiple times.

On September 24, 2014, a double bench of Gopal Parajuli and Om Prakash Mishra said Karki had completed 24 years of  public service and it did not touch upon his moral standing. The decision also did not give any weight to the Rayamajhi Commission, which had implicated Karki. He was appointed without any hearings in Parliament and the moral issue was never discussed.

In course of the litigation, Karki’s lawyer argued that Aryal had to be “blacklisted” as he was running a smear campaign against the head of a constitutional commission. Much time was spent on discussing this issue in court rather than the main issue of the writ petition: the legality or otherwise of Karki’s appointment. Aryal often found himself  fighting the case alone. Many fellow-lawyers refused to fight on his behalf. Some of them were  threatened by the CIAA and Karki’s operatives. At the end, only one lawyer, out of 60, showed up in defense of Aryal. All of them had worked on a pro-bono basis.

Aryal had to wait a while before the full text of the decision was issued. Ram Kumar Shah, then chief justice, wanted to close the case before his own retirement on July 8, 2015.

The full text of the decision came out on June 2, 2015 and Aryal filed another writ on November 25, 2015 asking for a review of the court’s  decision. It was only on August 26, 2016 that the court issued an order to furnish the original case file on Karki’s appointment. The subsequent drama that unfolded  was not only insulting to the court but also gave the impression that Karki was above the law. He used every possible tactic to evade the court order. Meanwhile on September 19, he flew off to Canada at government expense for 15 days.

The political parties’ decision to impeach Karki last week, on the day he returned to Kathmandu, has sent shock waves across Kathmandu’s elite circles.
Karki was suspended on October 20, 2016, and on the 21st Om Prakash Aryal filed another supplementary application asking the court to revoke his pay and perks. Aryal cited the possible obstruction of justice as Karki reportedly continues to wield influence from his official residence inside the CIAA complex at Tangal, Kathmandu. Aryal says Karki believes in rule by law, not rule of law. He compares Karki’s doings to India’s economic blockade.

The father of an eight-year-old son, Aryal says the fact that he had never cozied up to the high and mighty in Kathmandu made his legal fight against Karki that much easier. Greatly inspired by people like former UN assistant secretary general Kul Chandra Gautam, his village neighbor, Aryal has full faith in the current Supreme Court. He says Chief Justice Sushila Karki’s sense of conviction and fearlessness will restore people’s faith in the legal system.

He was upbeat over the recent developments toward finally impeaching Karki. Aryal has the fortitude, conviction and discipline to cover the distance.

Aryal now has his eyes on the crimes perpetrated during the Maoist insurgency. He says if the country fails to prosecute those involved in gross violations of human rights, these will be taken to the international court.

Interestingly, the man who has been waging legal battles for over three years to annul Karki’s appointment  has never met him in person.

“I wouldn’t mind meeting him,” he said.