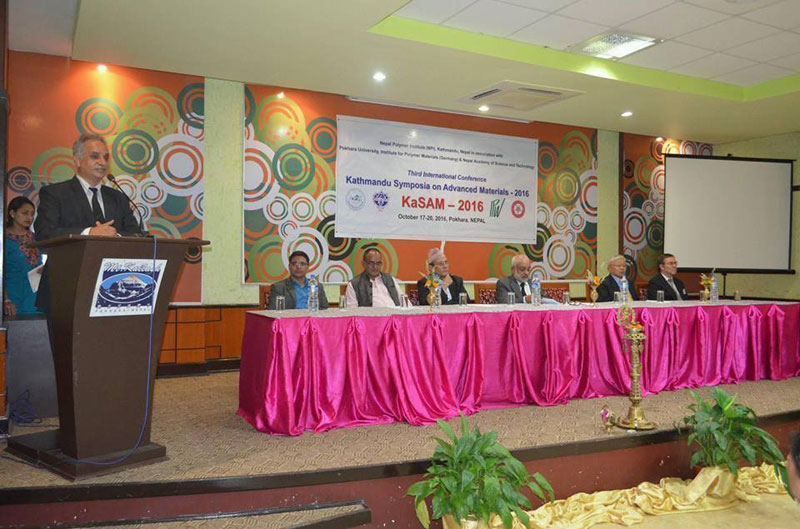 POKHARA, Oct 23: The ‘Kathmandu Symposia on Advanced Materials- 2016 (KaSAM-2016)’, organized by Nepal Polymer Institute (NPI) in association with the Nepal Academy of Science and Technology (NAST), the Pokhara University and German-based Institute of Polymer Materials (IPW) has successfully concluded in Pokhara.

Vice-Chancellor of Nepal Academy of Science and Technology (NAST) Prof. Dr. Jiba Raj Pokharel inaugurated the meeting by lighting ‘Panas-Batti’ in the evening of October 17 at Mount Kailash Resort (Lakeside, Pokhara) in front of more than 180 scientists from 16 countries across the globe. During his inauguration speech, Prof. Pokharel emphasized the importance of investment in scientific researches and activities in the country and praised the organizing committee for conducting such an international meeting outside of the capital city.

Another speaker Vice-Chancellor of Pokhara University Prof. Dr. Chiranjibi Sharma, patron of KaSAM-2016, expressed his happiness to be the co-organizer of this mega scientific event in Pokhara and highlighted the global platform provided by this program for the students and professors of the university.

The inauguration ceremony was chaired by the President of Nepal Polymer Institute Prof. Dr. Rameshwar Adhikari (Central Department of Chemistry, Tribhuvan University, Kathmandu) who is also the Convener of the event.

On October 17, a workshop named as ‘Kathmandu Autumn School on Chemistry and Chemical Technologies (KASChem)-2016’for students and young scientists was also organized in Pokhara University. This short course was focused on nonmaterial where scientists from Czech Republic, France, Germany, Japan and Nepal gave tutorial lectures on various aspects of synthesis, characterization and application of nonmaterial.

A special lecture was also held on Oct 17 on ‘Science, Technology, Engineering and Math (STEM): Changing the World One Bit at a Time’ by Ms. Gwendolyn Bluemich from Global Foundries, USA. According to Prof. Adhikari, the four-day long conference was focused on in-depth discussions about latest researches on material science and engineering.

Among more than 140 papers, interesting researches about the use of nano/bio-materials to tackle some of the ongoing global problems such as human infection caused by antibiotic resistant superbugs were also discussed during the meeting, said Prof. Adhikari. Special sessions on ‘Science, Technology & Innovations’ and ‘Natural Products and Pharmaceuticals’ for Nepal were also part of the meeting.

During his closing remarks, Prof. Adhikari further highlighted the responsibilities of younger generation for popularization of science and urgent necessity of investment and dedication in science and technology for the development of the country. Prof. Adhikari presented an outline of the upcoming programs of NPI including Nepal Chemical Congress-2017, 2nd Young Scientist Summit-2017, and continuation of KASChem-2016 Outreach program, under the framework of NEPAS, in Chitwan (October 22) and Biratnagar (October 24) with active involvement of foreign scientists.

All three Nepalese student awardees will receive a complementary registration to the ‘2nd Young Scientists Summit-2017’ organized by NPI in Kathmandu during the upcoming winter. 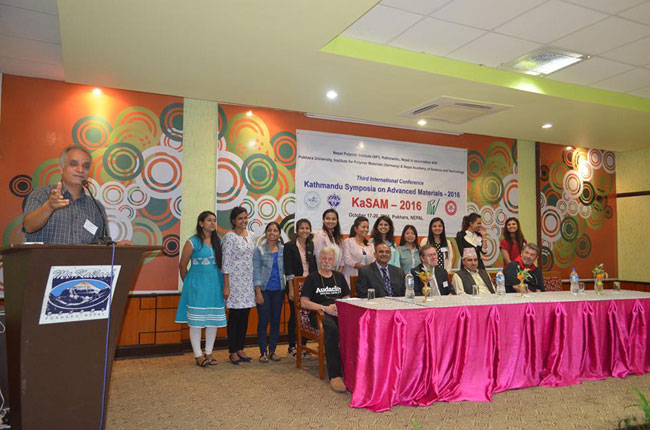