JANAKPURDHAM, Oct 30: The rituals associated with the Chhath festival are commencing from Thursday.

The sun is especially worshiped amidst various rituals and by making different kinds of offerings. The main rituals of the festival, observed in succession in a period of four days, include the arba-arbain, kharana, offering argha to the setting sun and offering argha to the rising sun. The arba-arbain ritual is observed on the first day (Chaturthi) which falls on Thursday this year. This ritual is also called nahaya-khaya. 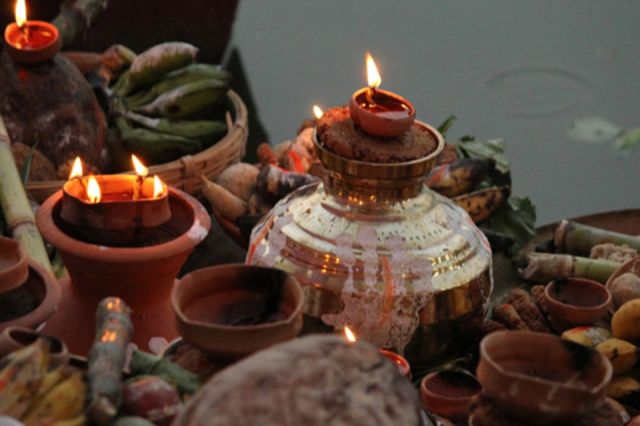 The devotees observe a complete fast on this day even without drinking water. They offer payas (rice pudding) to the moon after moon rise and partake this offering. On the third day of the festival (Shasthi), various delicacies are prepared out of the flour of rice and wheat grains grinded in traditional grinders (okhal, jaanto or dhiki).

All the members of the family go to the assigned water body, ponds or the bank of the river, carrying a variety of offerings, amidst the singing of devotional and folk songs. The offerings include the delicacies like thakuwa, bhusawa, khajuri, perukiya; fruits like coconut, orange, banana, citrus fruits; and other articles as nanglo, koniya, saraba, dhakan, elephant terracotta idol. These offerings are all carried in a big basket. Before placing the offerings on the bank of the river or pond, the devotees prostrate five times in front of the spot and the offerings.

On this day, the devotees go to the bank of the pond or river to the place which is specially anointed for the rituals in the early morning. They repeat the rituals conducted in the previous evening and make offerings of argha to the rising sun. After done with the argha rituals, the devotees listen to the chanting of the Surya Purana scripture by the priests. They also listen to and narrate the story related to the Chhath fasting. Chhath is such festival in the world considered as an attractive custom of the tradition of worshipping the sun in which both the rising and setting sun is worshipped and presented different offerings.

As per the oriental philosophy, human civilization developed on river banks and the sun and water are the most essential elements out of the five main elements that sustain life on the Earth. The Chhath festival is an occasion to pay obeisance to these five elements. Sun worship is the main theme of this festival and it embodies the message of mutual good will, unity and co-existence.

The sun is the basis of existence of life, nature, planets, constellations, time and epochs. The festival also celebrates the life-sustaining energy of the sun and the Chhathi goddess. So both the sun god and chhathi goddess are worshipped during the Chhath festival. Worshipping the male and female form on this occasion means showing respect to the natural form of creation of life on this Earth.

The sun is also considered the god of health and prosperity. The fasting observed during this festival is considered one of the most rigorous of fasting. The Chhath festival which used to be marked only in the Mithilanchal region before is now celebrated in the hilly areas and other regions as well. Its popularity is growing in Nepali society these days.

Minister Jhakri hospitalized
12 hours ago
Govt recommends ambassadors to India, UK and the USA
8 hours ago