300 tons of Chinese apples entering Nepal every day for Tihar 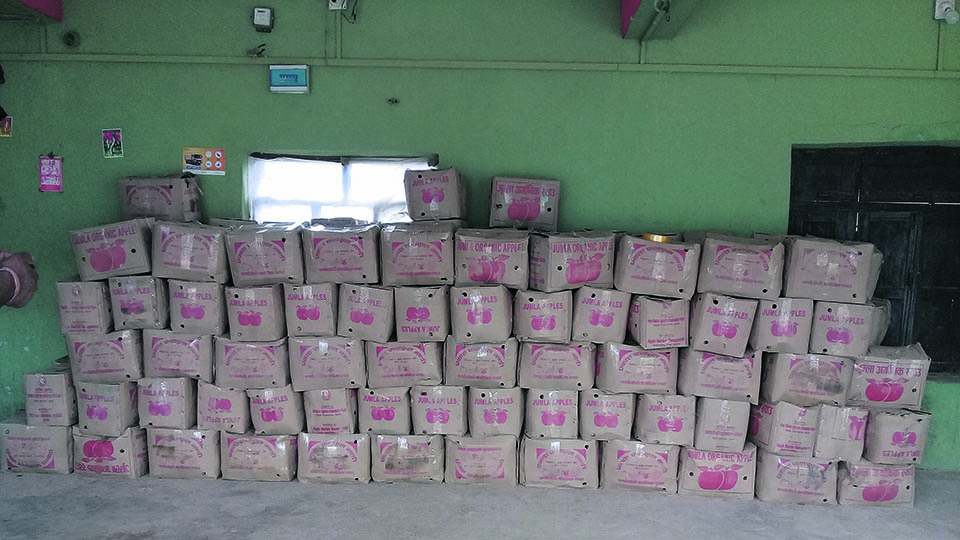 SINDHUPALCHOWK, Oct 27: Traders are importing some 300 tons of apples every day from China via Tatopani border over the past two weeks.

The import of apples has increased as consumption of fruits increases significantly during Tihar festival.

According to traders, import of apples started increases right after the customs office opened after Dashain holidays. As Indian and Nepali apples are expensive compared to Chinese apples, the import of apples from the northern neighbor is on the rise, say traders.

Traders say Chinese apples are 50% cheaper than Nepali and Indian apples. Keshav Raj Oli, an officer at Tatopani Dry Port Customs Office, said the import of apples started increasing after Dashain festival. “An average of 30 containers of apples enter Nepal via the dry port every day,” he added.

Before Dashain festival, traders were importing some 10 containers of goods from China on a daily basis. Fifty percent of total imports were apples.

The customs office resumed operation after Dashain holidays from October 10.

Tatopani border, which was closed for four years after the 2015 earthquakes, reopened on May 29.

Increased movement of containers through Tatopani border has raised hopes among traders that trade through the customs point, which was the country’s largest trading point with China until the 2015 earthquakes, will increase in the coming days.

Before the 2015 earthquakes, some 60 containers carrying different Chinese goods used to enter Nepal through the Tatopani border.

According to Oli, the customs office has valued Fuji apples at Rs 80 per kg and normal apples at Rs 57 per kg. The office levies 10% of the cost as agriculture service fee among other taxes.

“After adding customs duty, container fare and our profit margin, we can sell apples to retailers at Rs 95 per kg,” Deepak Shrestha, a trader, told Republica.

Chinese apples are priced in range of Rs 120-150 per kg in the market.

“Apples grown in China are 50% cheaper compared to Nepali and Indian apples. This is why there is high demand for Chinese apples among middle and lower class consumers,” Shrestha said, adding that Indian and Nepali apples cost around Rs 300 per kg.

He also added that appreciation of Chinese RMB vis-à-vis Nepali rupee has made apples dearer this year. “Despite increment in price, Chinese apples are still cheaper. It has not affected demand in the market,” Shrestha added.