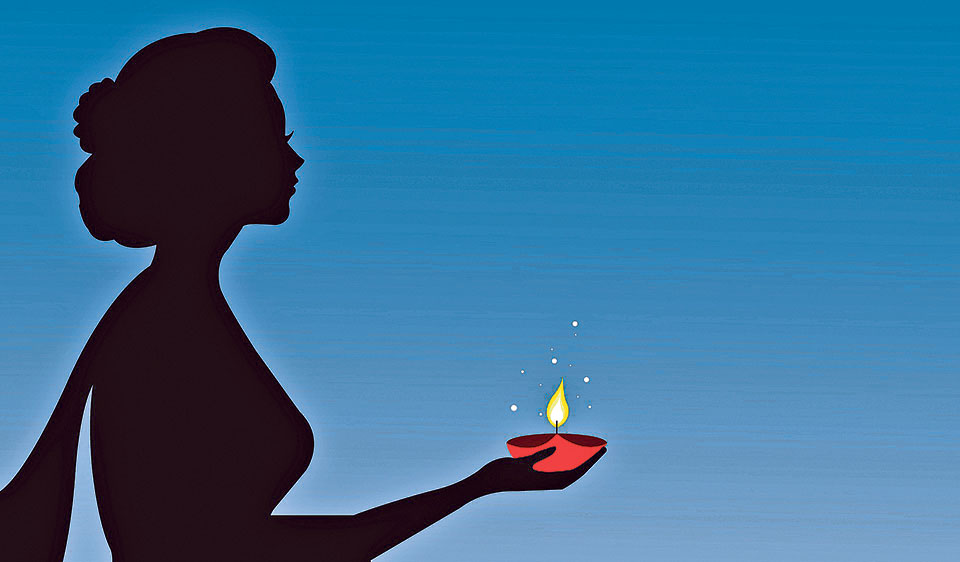 Bollywood glamorizes Hindu rituals and ceremonies. Hindi serials on television too tend to show lavish weddings and festivals. Maybe it’s because we have, over the years, been watching these on a fairly regular basis that our own celebrations too have sort of started looking like a scene from a Karan Johar or Sanjay Leela Bhansali movie. Sangeet now features prominently in Nepali weddings and we take great pains to make elaborate rangolis during Tihar. People’s opinions on this Indian influence on our culture are divided. It can be good but it also has its downsides. We need to know where to draw the line. The Week asked some people to share their thoughts on the matter. Here’s what they had to say.

Binay Shekhar
The influence of Indian culture in the way we celebrate our festivals is undeniable. And although I can understand people wanting to learn new things and pick up new activities to include from Indian culture into our festivals and occasions, I don’t really support this. Learning and altering a few things here and there is acceptable. What isn’t acceptable is blatantly copying ideas because it’s fun and ‘glamorous’. Also, one has to keep in mind how this influence is dominating our own traditions and entirely changing the way we look at occasions we have been celebrating a certain way for centuries. I think Nepalis should understand the importance of maintaining and thus preserving their own culture instead of falling into the trap of emulating something they see on films and TV.

Simran Piya
I grew up in a community that has a lot of Indians so I’ve been familiar with their culture from a young age. The way I see it, Indian and Nepali cultures overlap a lot – especially because both of these countries are mostly inhabited by Hindus. But there are things inherent to Indian culture – like weeklong marriages – that are getting adopted by Nepalis more and more these days. Frankly, I don’t see anything wrong with that. How someone wants to celebrate different festivals and occasions is up to him/her. I believe you shouldn’t judge anyone for doing things a little differently.

Mansi Oli
For me, Tihar is one of the most beautiful festivals ever. I love every aspect of it: the celebrations, lights, rangoli, flowers, etc. And many of these things wouldn’t have been there without the influence from Indian culture. And as I as well as the people around me have so much fun thanks to it all, I personally don’t think it’s bad at all. However, I think a person liking and not liking the influence largely depends on the individual. For me, what this means is that as we dance along to Bollywood numbers, we should also encourage the deusi-bhailo that is an intrinsic part of our celebration. I don’t think you should have to choose one over the other.

Sunita Subedi
For quite a while now, I’ve been noticing just how much the Indian culture is influencing and, in a sense, taking over our festivals and big occasions – especially marriage ceremonies. A lot of Nepali marriages these days include functions like the mehendi ceremony and the haldi ceremony that weren’t a part of our marriage functions till a few years back. These functions are a part of Indian wedding ceremonies. I know in movies these ceremonies look really impressive and glamorous but including them is completely changing our traditions and culture, not to mention putting an additional financial pressure on the girl’s family. I don’t like this one bit and wish Nepalis would stick to their own culture and preserve it properly. There are a lot of rituals and traditions that are fun in our own culture too.

Yalamber Limbu
Personally I respect and acknowledge all cultures, societies and influences of the world. There is a lot that us Nepalis can take away from each culture in the world. As the Indian and Nepali culture have a lot of similarities, it’s natural for us to be influenced by certain aspects of our neighbor’s culture. And I don’t think that is a bad thing. These influences have made our festivals vibrant and even more fun and I think it’s okay to blend good aspects from different cultures. What you shouldn’t do is abandon your cultural roots but apart from that, I believe you can choose to celebrate any festival however you want to.  Tell me, who doesn’t love making rangolis in Tihar?

Supriya Rayamajhi
I don’t think a little influence is bad if it means you are having a good time. However, this shouldn’t lead us to sideline our own culture and traditions. As long as we remember to keep our traditions alive, it’s okay to be inspired from other cultures and add a few things to our culture accordingly. If a person wishes to celebrate Tihar in the full-Nepali way, they have the right to do so. But if someone wants the best of both cultures then they should have the freedom to do that as well. I believe celebrations are personal and a lot depends on how one wants to celebrate a certain festival. The point is to honor our traditions and have fun while at it.

‘Southside With You’ takes details that the Obamas have shared about their first date in various interviews, and imagines the... Read More...