Rhinos maintain winning streak to reach next round, Paltan eliminated

KATHMANDU, Oct 20: Kajal and Kanchan Shrestha shared an opening partnership of 71 runs to ensure Chitwan Rhinos defeated PokharaPaltan by seven wickets to maintain its winning streak and reach next round of the Womens’ Champions League (WCL) held at Tribhuvan University Cricket Ground in Kirtipur on Saturday.

Rhinos chased the total of 128 runs for the loss of three wickets in 18 overs. Paltan has been eliminated from the league with third loss of the trot. It had previously lost to Kat Queens Kathmandu and Biratnagar Titans.

Rhinos remained unbeaten in the tournament after Kajal Shrestha became sixth batter to register a half-century in the league. Shrestha scored 51 runs facing 47 deliveries which included five boundaries to steer the comfortable chase.

Similarly, Kanchan Shrestha and skipper InduVerma registered 29 and 24 runs off 34 and 23 deliveries respectively. Both batter were dismissed by Anjali Chand who conceded miserly 19 runs off her four overs in the match in a losing cause. Likewise, Sushma Shrestha chipped in with a wicket. SumanKhatiwada stayed unbeaten on 6 runs for Rhinos during the winning chase.

Earlier, winless in two matches previously, Paltan won the toss and elected to bat first. Skipper SitaRanaMagar led the batting for the team remaining unbeaten on swiftly crafted 65 runs off 56 deliveries which included seven boundaries and a six. She shared an unbeaten partnership of 43 runs with ManjuBogati for the sixth wickets to take Paltan total to 127 for the loss of five wickets in 20 overs. Bogati scored 24 off 16 deliveries which included two boundaries and two sixes.

KabitaGautam was pick of the bowlers for Rhinos registering two wickets in her four overs conceding 21 runs. RekhaRawal chipped in with a wicket.

Rhinos has qualified for the next round with a match against Biratnagar Titans on Sunday. In worst case scenario, Rhinos will at least play the Eliminator on Tuesday. Paltan will play a consolation final league match against Lalitpur Falcons on Monday.

Kat Queens Kathmandu secured its second win on the trot to upset Biratnagar Titans in a convincing win by 52 runs in the seventh match of WCL played at Tribhuvan University Cricket Ground in Kirtipur on Saturday.

Kat Queens collected 139 runs for the loss of two wickets in 20 overs after being invited to bat first in the second match of day four.

Player of the match Roma Thapa remained unbeaten on 53 runs off 52 deliveries which included six boundaries. She shared a partnership of 76 runs with opening batter RashmiChaulagain and unbeaten 60 runs with skipper RubinaChhetri to anchor the batting innings.

Dolly Bhatt was the only wicket-keeper of the innings for Titans removing Sobha Ale for two runs.

During the chase, LaxmiChaulagain remained unbeaten on 40 runs off 50 deliveries which included five boundaries. However, she didn’t get any support from the other end as Titans batter struggled throughout the second innings. Bhatt was the only other double-digit scorer of the innings with 13 runs to her name off 14 deliveries.

SumanBist chipped in two wickets for Kat Queens whereas IshworiBist and Chhetri shared a wicket each. Veteran MamtaThapa picked up two catches and influenced a stumping to make an impact from behind the wickets for the wining team. 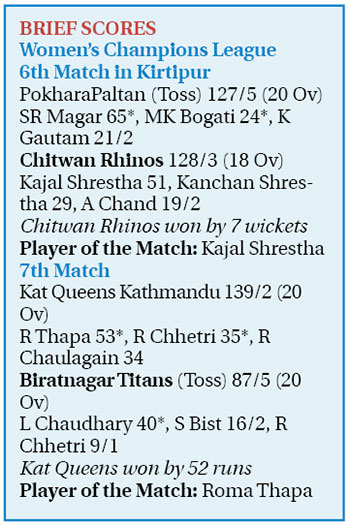 Both teams are on four points after three matches (two wins and a loss) each. Kat Queens tips Titans on net run rate with a match reach to go in the league stage. Kat Queens will face struggling Falcons whereas Titans will face in-form Rhinos on Sunday.