Passengers stranded for days as bus tickets hard to get 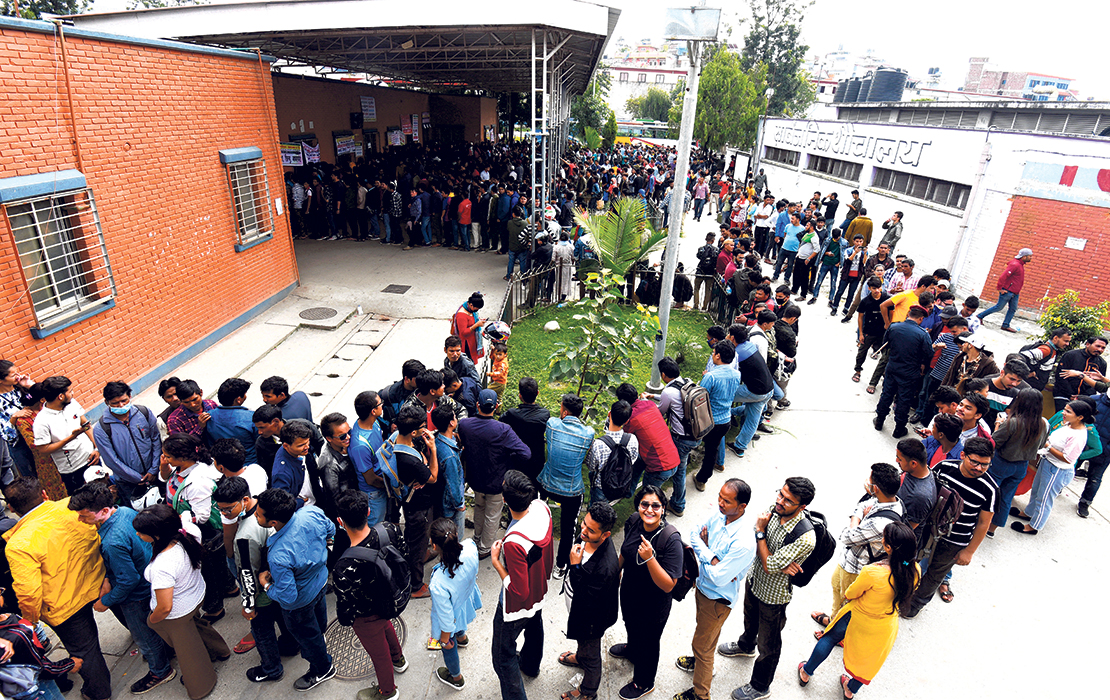 People planning to visit their relatives in various districts during the Dashain festival form serpentine queues at the Gongabu bus park in Balaju on Sunday to pre-book bus tickets. Photo: Monika Malla/Republica

SURKHET, Oct 3: Surendra Tiruwa of Sannitrivedi in Kalikot district was in Kohalpur, Banke some two weeks ago for a relative’s medical treatment. Tiruwa had a five-year-old daughter with him. He tried to get bus tickets for his return home. For two consecutive days, he kept visiting various ticket counters. The money he needed for his journey was already spent on his two days’ stay in Nepalgunj.

Hotel expenses in Surkhet have already rendered him broke. “I only had enough money to reach home,” he said on Tuesday morning. “I am trying to borrow some from relatives in Surkhet”. Tiruwa finally got his bus ticket on Wednesday morning.

Birendranagar is considered the gateway to Karnali. Tirtha Rokaya, a Jumla local, vented his frustration at not getting a bus ticket home for Ghatasthapana, the first day of Dashain. Rokaya had come to Surkhet on Monday and only got a ticket for Wednesday.

“There are ‘packed’ signs everywhere I go. I don’t understand if this is due to more people traveling home this festive season or lack of enough buses,” he said.

Although bus operators claim to have increased the number of buses on the Karnali Highway in view of Dashain traffic, people have not been able to leave at the time of their choosing. There are around 100 buses plying the Karnali Highway every day. The distance from Surkhet to Gamgadhi in Mugu district is 214 km, which takes 14 to 20 hours to cover.

“Last year there were only 40 buses running on the Karnali Highway during Dashain. This time we have around 60,” said Janak Wali of Mid-Western Transport Service Surkhet Private Limited.
Parents send their children to Nepalgunj, Surkhet, Kathmandu and India for higher education. During Dashain they all want to return home, which causes a bulge in bus passenger traffic, added Wali.

Traveling is rough
Covering Karnali Highway is a tougher ordeal than getting a bus ticket. The road is very narrow and bumpy with potholes. Travelers have named it the ‘death highway’. Buses are prohibited from using the highway during the night because of its sorry state. Landing a bus ticket is difficult enough. The ban on night runs makes reaching home more difficult still.

The highway also gets clogged by traffic during festival times. “If a bus breaks down or meets with an accident, the whole highway gets blocked”, said Ramesh BK, a driver on the route.

The government had fixed the ticket fare from Birendranagar to Gamgadhi, Mugu at Rs 1,880.

However, private companies have been charging as much as Rs 2,500. “Black marketing in tickets is rampant during Dashain,” said Ramesh Malla, a passenger on his way home. “While we can reach Kalikot with Rs 800 at other times, we are being charged Rs 1,500 for the same distance during Dashain,” he complained.