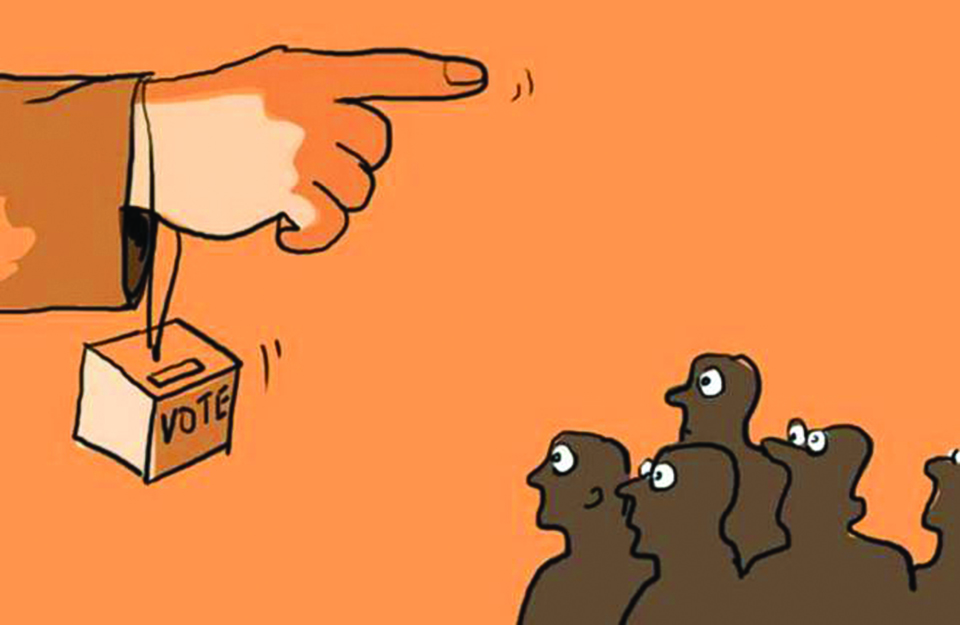 While declaring the September 15 as the international day of democracy, the United Nations stated that “the will of the people shall be the basis of the authority of the people.” As democracy is about consulting, caring and comforting people, the job of any government is to protect people, improve their quality of life in larger freedom giving a sense of ownership in governance.

A quick look across the world about the state of democracy is depressing. Populism on both the right and the left has turned out to be its worst enemy, with a contagious effect on all regions of the world. Populists as elected representatives are misusing democracy to dismantle the democratic political system to consolidate powers and undermine the process they came through.

These “delegative democrats” are overreaching the institutions of checks and balances to “deconstruct and reconstruct political institutions,” including the independence of courts, sensitive state institutions like the civil service, the intelligence agencies and the police, universities, civil society, the business community and the media.

After the end of the Cold War and onset of the 21st century, democracy was on the march.  Economic success made democracy attractive and performing.  Freedom House states that there were only 11 democracies in 1900, 20 in 1920 and 29 in 1974. In 1993, the number of democracies reached 77, and in 2006, it reached 86.  But after 2006, democratic advancements began to reverse. The rise of illiberal, anti-immigrant populist movements in established democracies including in the United Kingdom and the United States peaked to populism leading to the steady decline in the quality of democracy.

Freedom House notes past 12 consecutive years of erosion in global levels of political rights and civil liberties, with so many more countries declining than gaining each year.  There has been a weakening of democratic institutions. This makes democracy facing a global crisis.

IMF projections are cited to show that in the next five years, the total GDP of countries rated not free by Freedom House will surpass that of Western democracies. It projects the combined economies of democratic countries like the US, Germany, France and Japan will be smaller than those of autocracies like China, Russia, Turkey and Saudi Arabia.

Democratic reversals have tipped the scale from democratic dominance to authoritarian resurgence. These estimates project 1.8 billion people around the world will live in upper income with per capita income crossing $20,000 next year.

As political decay increasingly advances, an emerging axis of authoritarians declares liberal idea to have “outlived its purpose.” The “delegative democrats” are upbeat and have developed heightened temptations to move to strongman theory targeting political rights and liberal values in the name of order, stability and prosperity to consolidate powers. There has been a surge in global powers that are undermining democratic and liberal values around the world. The rise of religious intolerance is worrying. The problem is not just that democracies are declining. Problem is that autocracies are rising and becoming more repressive and aggressive. And custodians of democracy have gone silent.

Nepal’s context
The government of the day that calls itself a communist government came to power through democratic elections, playing on rhetoric and thriving on cheap slogans. Nationalism was their sole agenda in opposition. In power, they are targeting democratic norms and institutions.  Their modus operandi is simple: double standards and pack of lies. They say one thing while in opposition and just the opposite while in power.

The government appears fast developing its affinity toward populist authoritarian tendencies. Under federal system of governance, the government appears concentrating power, bringing critical offices under Prime Minister Office. State institutions including constitutional bodies are under increasing surveillance. Their freedom of functions and practices and protocol of reasonableness is being curtailed.

Several Bills starting from media bill to a bill to amend the National Human Rights Commission Act under consideration in the Parliament aim to severely impair autonomy and independence of these bodies.  These drafts pay no attention to the constitutional clauses and the principles. They undermine the constitution and violate its provisions.

Rule of law, pluralism and democracy are in danger. There is a rapid erosion of public trust in state institutions, and deep anger is developing.  Unique unity in social fabric risks eruptions in a multiethnic, multi-lingual, and multi-religious country.  The central challenge, thus, has come to be maintaining unity and harmony in huge diversity within an overall framework of democratic polity.

Public is losing faith in the power of electoral process because democratic institutions are manipulated. Opposition leaders are physically attacked.  Democracy is turning feeble under the communist government.   Danger level is rising. These tendencies are accelerating and heading toward reversal of pluralistic values and norms that Nepal’s political parties fought so hard for all these years.

Under such context and circumstances, democrats need to stand firmly against every design to undermine democratic principles and be on guard both within the parliament and outside safeguarding them. Democrats’ fight is on multiple fronts.  They have a special responsibility to show that they really take care of the people, and have a convincing, plausible and attractive alternative narrative for equality, social justice and solidarity each combined for actions on health, education and jobs creation.

Democrats are facing the tasks of century.  There is a new demanding, so there has to be a new listening. Democrats should not be afraid of taking tough decisions. They cannot give in to populism for momentary political or personal gains. BP Koirala foresaw these trends in the 1970s and said: “I do not propose to say or do anything which I think is not correct, even if it is popular. If democracy has to be saved, we cannot afford to give in to populism. To save democracy we may at times have to take unpopular decisions and make the people accept them. Of course, that will have to be done not through autocratic methods but by convincing the people.”

The rise of populism, jingoism and fundamentalism in today’s politics has proved to be threats to democracy. The increasing tendency to create a grossly exaggerated publicity and populist wildfire of nationalism has not galvanized broad support for the “nationalist” government. Democracy demands performance legitimacy, and that is to be seen and felt in daily life.

There is no alternative to democratic governance.   The need is to renew and reenergize democracy, not replace it. Democracy is a common heritage of humanity. Democracy never goes against the people. Democracy may look fragile in the short-run as it has to harmonize differing views, but in the long-run, it is the most stable form of government. Single individual concentrating all powers spells disaster with calamitous consequences.

20 ministers lose their jobs, Oli-led Cabinet now has only five members
16 hours ago