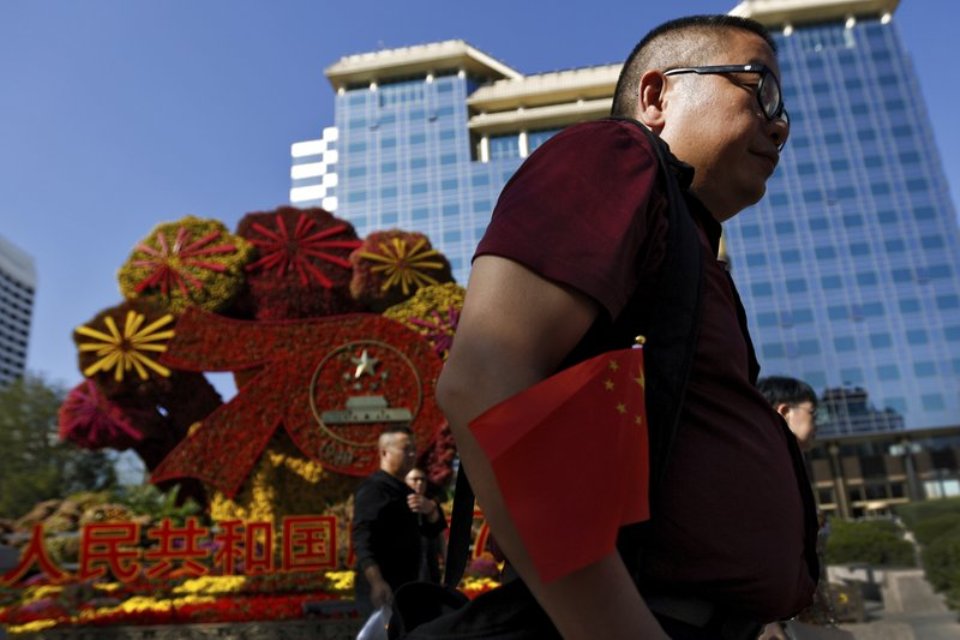 A man carrying a national flag walks with his colleagues past by a floral decoration for the 70th anniversary of the founding of the People's Republic of China, on display along Chang'an street in Beijing, Tuesday, Sept. 24, 2019. China's central bank governor says policy will stay "stable and healthy," suggesting Beijing has no plans to join the United States and Europe in cutting interest rates to stimulate economic growth. (AP Photo/Andy Wong)

BEIJING, Sept 24: China’s central bank governor said Tuesday its monetary policy will stay “stable and healthy,” suggesting Beijing has no plans to join the United States and Europe in cutting interest rates to stimulate economic growth amid a tariff war with Washington.

The People’s Bank of China will avoid a “massive stimulus,” Yi Gang said at a news conference.

Beijing is trying to shore up cooling economic growth amid a tariff war with Washington but is wary of reviving a rise in debt levels that are so high that rating agencies have cut China’s credit rating.

“We believe that for our monetary policy we should stay committed to our own course and stick with an orientation that is stable and healthy,” Yi said.

China’s economic growth hit a three-decade low of 6.6% in 2018, adding to pressure on Beijing to expand stimulus measures. The ruling Communist Party is trying to shift to growth supported by domestic consumption instead of exports and investment but loosened lending controls after growth declined faster than planned.

Despite that, regulators have affirmed that reining in corporate and household debt is a priority.

“We must not adopt massive stimulus packages,” Yi said. “We must make sure the leverage rate remains stable so that the total debt level remains sustainable.”

Staying fit and healthy in this fast moving world has turned out to be the biggest challenge for many of... Read More...

Fire breaks out at Soaltee City (with photos)
11 minutes ago