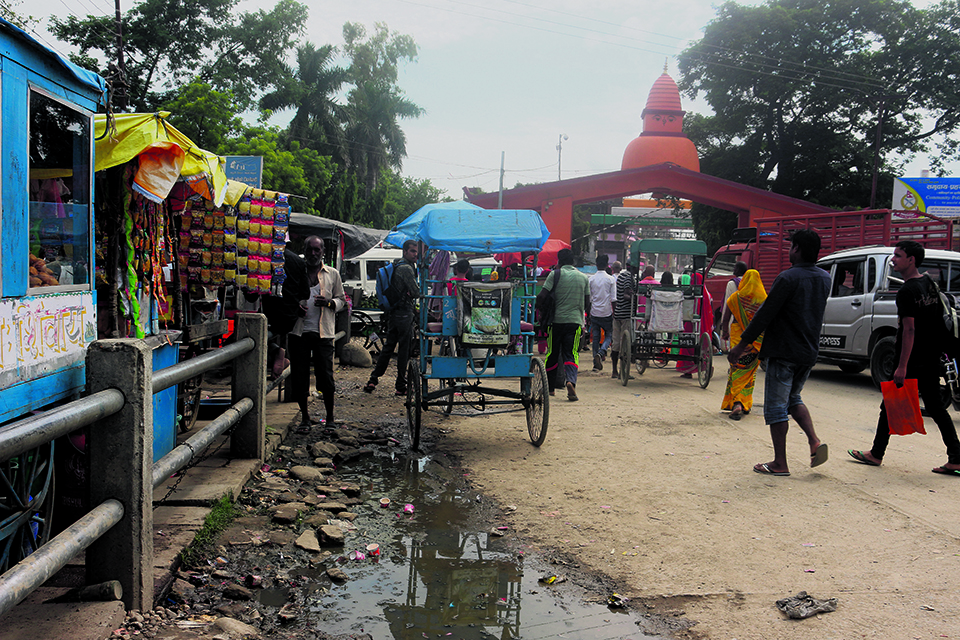 BUTWAL, Sept 24: Dozens of tourists from Sri Lanka, Myanmar, Thailand, China, India and other countries enter Nepal via the Belahiya Bahia border point in Rupandehi every day. This gateway is not only narrow and short, but also filthy and dusty.

Traffic police is hardly seen around and finding a place to park vehicle is a taxing job. When it rains, there is no place for the tourists to shelter themselves.

Largely littered by locals and neglected by the authorities, the border is a testimony to the government’s apathy towards one of the major border points of the country.  Amid the fast approaching Visit Nepal Year 2020, the scenario speaks volumes about the unpreparedness of the government.  According to Giriraj Khanal, chief immigration officer in Belahiya, over 150,000 tourists enter Nepal through this border point every year.

This year, from January till now, 94,360 tourists have entered into Nepal from this point. “Nationals from different countries coming to Nepal via India,” he said.

The main road of Rupandehi is in pathetic state. Due to government’s plan to widen it to six lane road, the existing road was tampered and has not been repaired so far.

According to locals, the road condition has been a huge source of headache for them, let alone tourists. “We are not able to cope up with this mess. How the tourists may be feeling about it? We feel ashamed of it,” said a local of Belahiya, Sagar Giri.

Giri added that the government has shown indifference to the main road even though the Visit Nepal Year 2020 is nearing. He also complained of uncovered sewages along the roadsides.

Locals also complain of poor traffic management even in primary traffic areas. There are a few traffic police personals to manage heavy traffic, they say.

“They have to do everything manually since there are no traffic lights. On the other hand there aren’t sufficient numbers of traffic personals to manage things,” Giri said.

Also according to Chandra Thapa, general secretary of Nepal Association Tour Agent (NATA) the poor transport management has taken a toll on tourism. Tourists get very bad impression of our country as soon as they enter the country, he noted.

“We are unable to provide good service even to those tourists who are ready to pay for it. When the road itself is not in a good condition, there is little we can do for making it better for them,” he said.

Thapa further stated that the matter was reported to the concerned ministry and departments but there was no serious response from them.

“We wrote to the tourism ministry several times. Similarly, we notified of it to the tourism board as well,” Thapa said. “But they have turned deaf ear to the problem,” he added.

He stressed on the need to have a helping desk for tourists near the border. In lack of that, they don’t get helping hand even in emergencies, he said.

The building of the immigration office is the only visible government office in the border. And the building too is in a dilapidated condition. There are four narrow rooms where the officials and staffs somehow manage to carry on with their duties while over 200 tourists throng here for visa on a daily basis.

According to Khanal, the immigration office chief, dilapidated road condition discourages tourists to even get off the vehicle and go through the process of acquiring visa. “They look so disinterested and exhausted,” he said.

For most of the tourists entering through this border, their first destination is Lumbini. And most of them are Buddhist. “They are eager to visit the land of Buddha and their first impression of Nepal is very bad,” said Giri. He added that many tourists shorten their stay in Nepal due to this bad impression.

Also according to Bishnu Sharma, immediate past president of NATA of Province 5 the sorry state of the border is quite discouraging tourists and tourism. “And this is happening when we are talking about celebrating the Visit Nepal Year 2020,” he said.

KHOTANG, Aug 14: Karna Bahadur Shrestha, a local of Khotang, who has initiated his cycle journey for publicity of Nepal... Read More...

RUPANDEHI, June 18: Aligning the major focus of budget towards agriculture, tourism, and infrastructure development, Province 5 has set an... Read More...

Lumbini as the birth place of Gautam Buddha is not even a subject of debate: Nepal
46 minutes ago