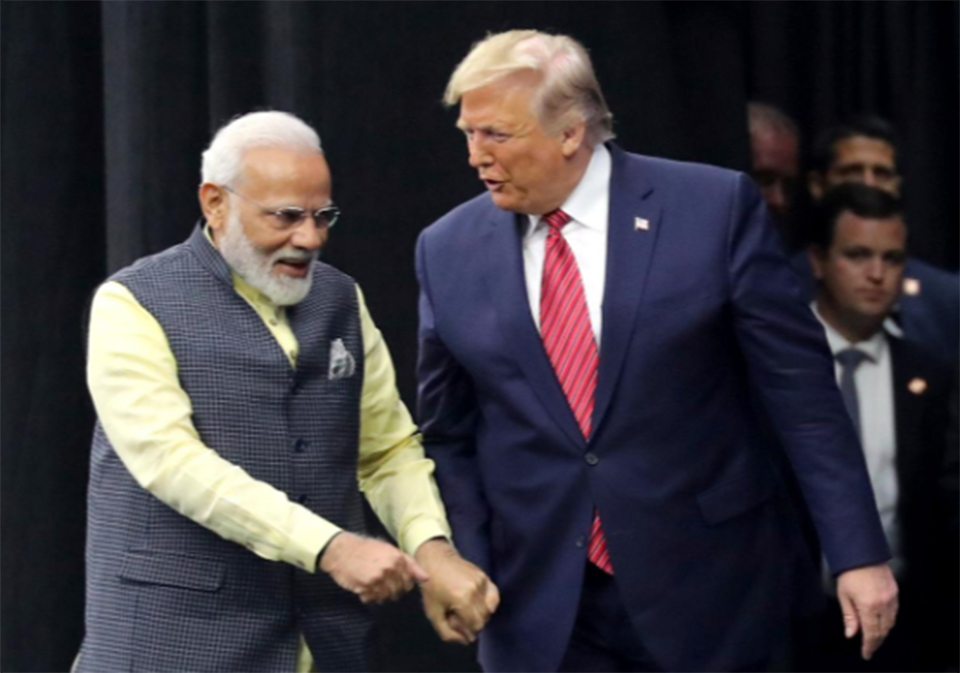 HOUSTON, Sept 23: U.S. President Donald Trump and Indian Prime Minister Narendra Modi shared a stage and showered each other with praise on Sunday at a “Howdy, Modi!” rally attended by upward of 50,000 people, a rare mass showing for a foreign leader on American soil.

Trump, calling the gathering a “profoundly historic event,” was greeted with a standing ovation by the Indian-American crowd and his speech was interrupted several times by roars of approval.

The U.S. leader hailed the India-U.S. relationship and the Indian-American community as he reached out to an ethnic group that voted overwhelmingly against him in 2016.

Modi began his talk inside the NRG Stadium, home of the Houston Texans football team, with a loud, “Howdy my friends!”

In his remarks delivered in Hindi, Modi said that he was “impatient to take the country to new heights” and that “today the buzz word in India is development.”

The event has given Modi, a nationalist facing international criticism over a recent crackdown in disputed Kashmir, a chance to energize his relationship with Indian-Americans who are active political supporters.

SAMOSAS, NACHOS
Jubilant supporters dressed in everything from ornate saris to simple dhotis and even a few cowboy hats waved American and Indian flags, chanted “Modi! Modi!” and munched on concession stand snacks that included Indian staples of samosas and naan breads - along with nachos.

“Today we celebrate our community and its importance in Houston and all America,” said Ketan Inamdar, who works in the administration of Houston’s Democratic Mayor Sylvester Turner, and painted an American flag on his right cheek and an Indian one on the left.

“Trump is very welcome here today. This event is to build harmony and love,” he said, standing just in front of the dais. “Race, religion and political parties don’t matter today.”

Houston is a rare Democratic stronghold in Republican-dominated Texas and serves as the economic anchor of a state that will be critical to Trump’s 2020 re-election bid. Polls show tepid support by Indian-American voters, some 75% of whom voted for his Democratic rival, Hillary Clinton, in 2016.

But organizers of the “Howdy, Modi!” event that was kicked off with a 90-minute cultural program featuring 400 costumed dancers, were delighted to welcome Trump.

“His presence is an indication of his support and endorsement of the strengthening of India’s relations with America,” said Preeti Dawra, a spokeswoman for the Texas India Forum that organized the event. “This event is about strengthening those ties.”

It was the first time Modi, who heads the Hindu nationalist Bharatiya Janata Party, addressed a large crowd in the United States, which is home to about 4 million Indian-Americans including about 300,000 in Houston and nearby Dallas, according to a Pew Research Center analysis of U.S. Census data.

Some 19,000 people turned out for a similar event in New York in 2014, and Indian-American volunteers living in U.S. suburbs helped run a telephone blitz of voters in India in the run-up to Modi’s May re-election campaign.

KASHMIR CRACKDOWN
Modi’s visit to Houston comes ahead of this week’s U.N. General Assembly in New York and amid a particularly tense time on the subcontinent.

The Indian leader further strained long-simmering relations with Pakistan last month by revoking the partial autonomy enjoyed by Muslim-majority Kashmir, which both nuclear-armed countries claim. Modi’s move has been met by international criticism.

Pakistan has condemned the crackdown and its Prime Minister Imran Khan warned it would drive more of the world’s Muslims into extremism.

The U.S.-India relationship on trade and tariffs is rocky, though Trump and Modi appear to have strong personal ties.

Devesh Kapur, director of Asia Programs at Johns Hopkins University, who has written a book on Indian-Americans, said that while the rally has symbolic value for both leaders, “it’s unlikely by itself to impact thorny trade issues ... but it can’t hurt.”

“The Trump administration’s hard-line policies on immigration ... have hardly endeared (him) to the community,” Kapur said. “Appearing with PM Modi might mildly help but certainly not reverse the community’s overall pro-Democrat leanings.”

NEW YORK, July 18 : President Donald Trump has placed racial animus at the center of his reelection campaign, and... Read More...

NRB introduces new Rs 1,000 note which can be identified by visually-impaired
23 hours ago