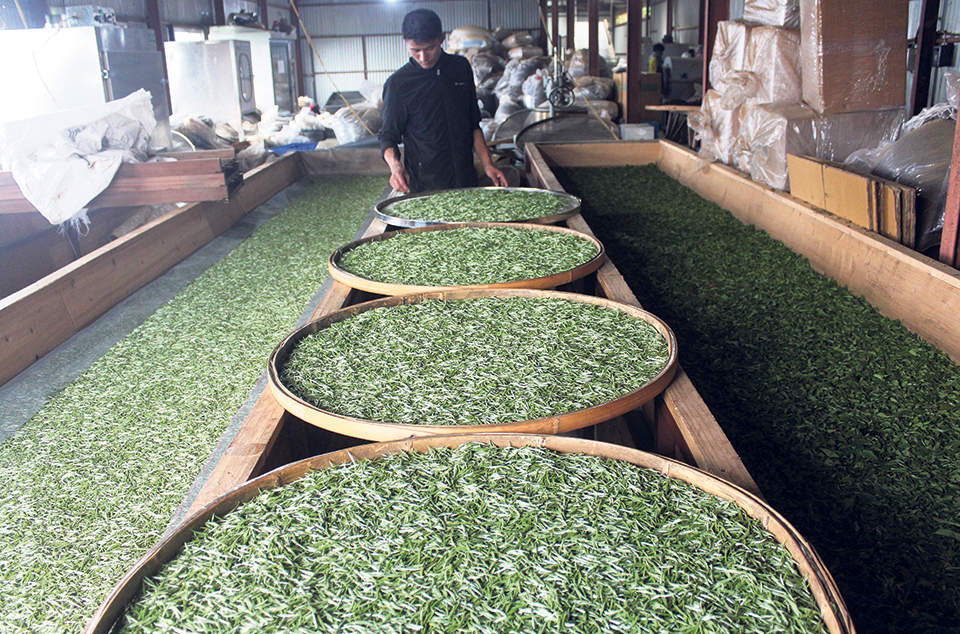 Jasbire Organic Tea Factory located at Jasbire of the district pays Rs 1,500 per kilogram to the farmers who bring green leaves’ buds. Sarad Subba of the industry said: “Better quality leaves are priced higher. Instant tea is also sold at a high price.” The plant processes 800 kilos of green tea daily. But only 7 to 8 kilograms of the leaves with single bud (suiro) is processed daily. “About one kilogram of tea is produced from 5 kilograms of green leaves,” Sarad said, “It is hard to process tea by collecting buds only.” Farmers bring green leaves with leaves and buds to the factory. The factory grades the leaves and accumulates buds. The wage for the task is Rs 500 per kilogram. “We send the green leaves to the farmers to sort the buds.” Subba told Republica, “The sorted buds are then processed in the factory.”

According to Subba who has also been a tea technician, four premium types of tea can be produced from the buds: golden needles, golden ring, white needles, and white ring. “The order for such tea is received a year prior to its production,” said Subba, “The demand is growing every year as these types are the best types in the Nepali tea industry.”

The tea made of buds is specially consumed in China and the demand is increasing at a pace that the factories are unable to meet. He said last year the factory produced 800 kilogram of such premium tea and this year, it aims at increasing the production to 1,000 kilograms.

There are 150 small and big-scale tea processing factories in Nepal but there are less than a dozen industries that produce premium tea leaves. “The demand for tea made up of buds is very high in the world but it is hard and costly to produce such tea,” said Rabin Rai, general secretary at Central Tea Cooperative Federation (CTCF). “The factories involved in the production of such tea in Nepal are countable in hands as it is difficult to produce such tea.” According to the factories, the tea prepared from buds is not consumed in Nepal. They say that the tea is traded at Rs 40,000 per kilogram from Kathmandu. The leaves left after the buds are sorted and used to prepare other types of tea. “We provide Rs 525 per kilogram for leaves that are produced from one leaf and one bud,” said Kamal Mainali, owner of Shangrila Tea Producers Pvt Ltd. “The price for such instant tea is high in the global market.”

Border security emerges as a major challenge in Ilam

ILAM, Oct 20: Suryodaya Municipality of Ilam has been adversely affected by garbage piled up in the city. The problem emerged... Read More...