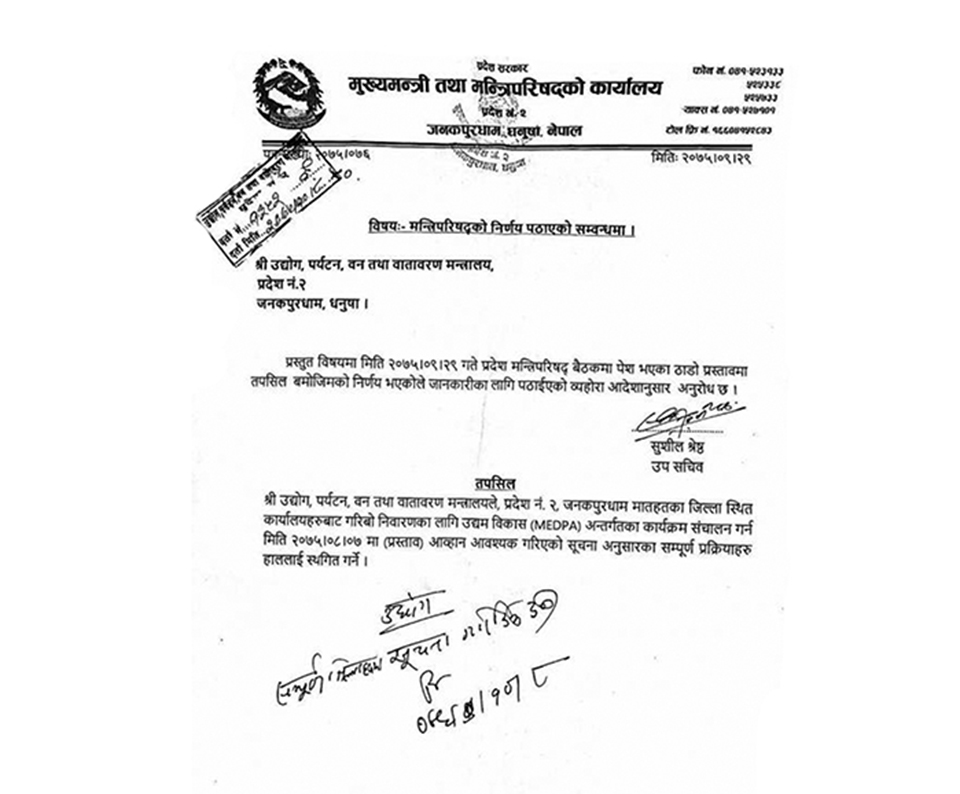 Inept record keeping and lack of transparency have crippling effect

KATHMANDU, Sept 19: A multi-billion rupee micro-enterprise project for eradicating poverty through micro-entrepreneurship and employment generation was established in 1998. The program is now mired in political mess and woefully inept record-keeping. Data on the entrepreneurs has not been updated for several years.

Previously known as MEDEP, the Micro Enterprise Development for Poverty Alleviation (MEDPA) program now caters to 142,589 entrepreneurs in all 77 districts. Over Rs 3 billion was spent during MEDEP’s fourth phase (2013-2018), which was assisted by UNDP and the Australian government. The government of Nepal has allocated Rs 1 billion for the program for the current fiscal year.

A recent study by a project-affiliated organization says more than 70 percent of the training was channeled to party henchmen, especially after the local governments kicked in under the federal system.

A Common Facility Center to run an orange juice production outlet was planned in Siudipusakot of Dullu Municipality, Dailekh district last year. A similar center was also proposed in Bhawani of Narayan Municipality for allo (nettle) processing. Wrangling between the major political parties on the selection of beneficiaries brought both schemes to a grinding halt.

Also last year, the chairperson of the District Coordination Committee in Salyan questioned the selection process of the Enterprise Development Service Provider (EDSP) in his district. As a result the MEDPA program did not begin on time.

In January this year, the minister for economic affairs and planning in Province 2 was reported to have physically assaulted the secretary of the Ministry for Industry, Tourism, Forest and Environment for not shortlisting his favorite NGO for the EDSP. The program was then suspended and thousands of prospective entrepreneurs were deprived of the training opportunity.

These incidents are all related to the implementation of the flagship MEDPA program, which has a special focus on the poor and marginalized.

However, according to those closely monitoring the program, it now caters to the party cadres of those in power.

According to the National Micro-Entrepreneurs Federation of Nepal (Nmefen), more than 70 percent of micro-enterprise related training under MEDPA went to the henchmen of the chiefs of municipalities and rural municipalities.

“Reports from all the districts confirm that the rigorous process of selecting the entrepreneurs is compromised,” says Kabi Raj Khatri, acting chairperson of Nmefen.

Nearly 47,000 entrepreneurs have received such training since 2016, according to MEDPA, which has an annual budget of over Rs 1 billion.

The Nmefen leadership cites a flaw in the revised MEDPA guidelines (2075 BS), which mandate the Udyam Bikas Samiti with selecting the wards and clusters for implementing the training. Headed by the chief of the local government, the committee has the enterprise development officer and chief administrative officer of the respective local government, one ward chairperson, Dalit and women’s representatives from among the ward members, and a representative from the local micro-entrepreneurs group as members and the chief of the Industrial Development Unit at the local government as member-secretary.

“The heads of the municipalities and rural municipalities are free to recommend ward chairpersons and other members of their choosing to the Udyam Bikas Samiti, and checks and balance are lacking,” claims Khatri. Representatives from finance, the private sector and the cooperatives should be included to preempt political meddling, he suggests. Nmefen with more than 200,000 entrepreneurs as members from across the country recently submitted a memorandum to the prime minister and line ministers requesting their intervention, he also said.

Officials in charge of the program at the Ministry of Industry, Commerce and Supplies agree that the local governments influence the Udyam Bikas Samiti one way or the other. “We are unable to comment on the decisions of local governments which are popularly-elected bodies,” says Dinesh Bhattarai, joint secretary at the ministry who is overseeing MEDAP.

Inept record keeping
The program is also found to be woefully inept in record keeping. Updated information is lacking on the 142,000 plus entrepreneurs that the program claims to have created in the last 20 plus years. Annual data on new entrepreneurs is compiled by the Enterprise Development Facilitator (EDF) at district level.

Frequent change of service providers is also cited as one reason for the lack of updated data. Officials at the ministry agree there is no system to figure out the status and whereabouts of beneficiaries. There is no mechanism for this, says Joint Secretary Bhattarai, who is also spokesperson for the ministry.

All in one year
Internalization of the program by the government is touted as one of the successes of the 20 years-plus initiative. However, experts cite a major flaw. The program is being implemented on a single-year basis, which goes against the multi-year approach needed for uplifting entrepreneurs to maturity. A continuous three-year support is needed and EDSPs should be selected to implement the programme through competitive bidding, they said. Two to three EDSPs are selected from each district for the purpose.

According to acting chairperson Khatri, the agreements with EDSPs are mostly done in April and as the fiscal year ends in July, the schedule for training and other related support for aspiring entrepreneurs is tight. Short-term training sessions are held, against the need for extensive 190-hour trainings. “The fiscal year deadline is not sufficient,” Khatri adds.

Sustainability in question
Entrepreneurs complain that there is a lack of support after exiting the program---especially in the field of technology upgrading, additional capital needs, and business and marketing. Creation of entrepreneurs is easier than sustaining them, they said.

Lack of follow-up and discontinuity of service providers is a major concern at local level, says Shanta BK, a senior EDF from Pyuthan. “Morale is low among EDFs across the country,” she added.

Officials at the ministry said the program is meant for populations living below the poverty line. “We want an individual to become an entrepreneur capable of competing in the market within a year. Ours is a more subsistence model,” agreed Bhattarai. There is a need for a growth model.

Most of the province governments are currently evaluating the expressions of interest to finalize the service providers at district level.

“We should be able to sign agreements with EDSPs by December so that the program will be rolled out for the remaining months of the fiscal year,” says National Program Manager of MEDPA, Dr Ramji Prasad Neupane.

UNDP, through a two-year technical assistance, is extending support to facilitate MEDPA in its new form, especially in relation to the institutionalization of the MED model at the local level. It also wants to extend coordination and provide support to the District Cottage and Small Industry Office (DCSIO) and local governments. “DCSIOs and local governments have many priorities, and micro enterprise development does not top the list” adds BK.

KATHMANDU, Jan 28: Regular flights from Tribhuvan International Airport have been delayed for more than an hour due to a... Read More...