US$ 10.5b education project in trouble: Mid-term review 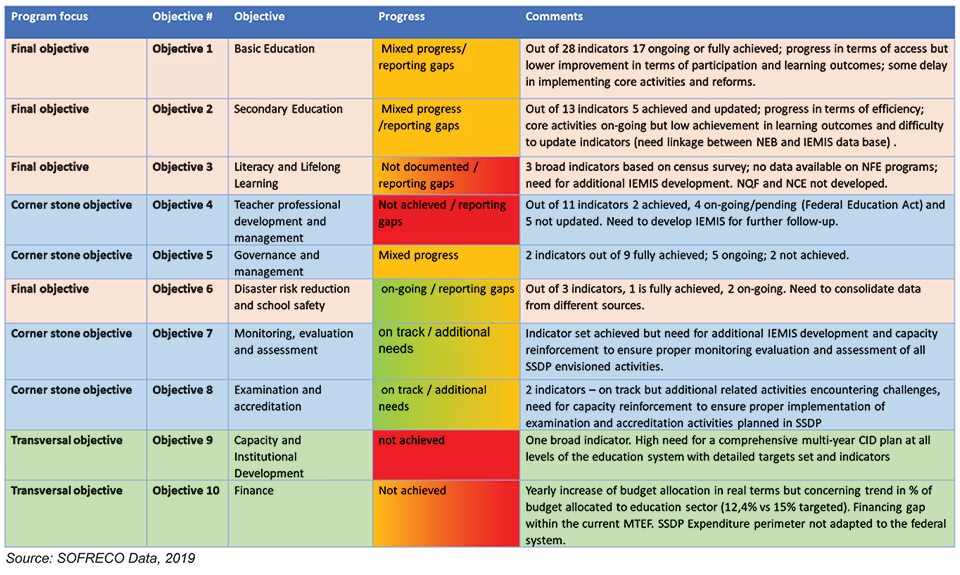 KATHMANDU, Sept 16: The much-hyped School Sector Development Plan (SSDP), which has a budget of US$ 10.5 billion to be spent over a seven-year period (2016/17-2022/23), is unlikely to achieve its stated objectives, according to a mid-term review.

According to the report based on the review of the past three and a half years, of the 10 stated objectives of the SSDP, none have been achieved so far. It has suggested reviewing the goals and time-frame of the project. The project has already spent US$ 6.46 billion and is expected to spend US$ 3.33 billion in the remaining three years.

Moreover, as Education Minister Giriraj Mani Pokharel has announced that Nepal will achieve 100% literacy in the next two years, the government has no records of the ongoing literacy program.

SOFRECO-FBC consortium. Eight national and international experts had worked from February to June of 2019 and submitted their report to the government and the donor agencies in June. The report has recommended reviewing the SSDP and its duration. The report has yet to be made public.

The government does not have detailed data on literacy and informal education. The report states that the three levels of government have a huge gap in maintaining and updating such data.

The Ministry of Education claims existing literacy rates at 88.6% between age group 15-24 years and 95% between age group 15-60 years. Based on the data received from the districts, the government has declared 51 districts as fully literate, and aims to take the number of fully literate districts to 70 by the end of the current fiscal year. The government has spent Rs 7 billion on literacy program and has approved another Rs 200 million to 18 districts, said Gehanath Gautam, director at the Center for Education and Human Resource Development.

One of the experts involved in the mid-term review said donor agencies may not buy the government’s claims of achievements on literacy.

The main objective of the SSDP is to make primary level enrollment 100% by 2030 and to improve public education. The government’s financial contribution in the SSDP is 88 percent and the donors’ 12 percent.

Only 17 of the 28 indicators on basic education are currently ongoing or have been fully achieved. Access to education has increased but learning achievement is low, states the report. On the secondary education front, out of the 13 indicators, five have been achieved and updated, but the achievement in learning is low.

One of the big focuses of SSDP is capacity and institutional development. However, the review points to the need for a “comprehensive multi-year plan at all levels of the education system with detailed target sets and indicators.”

While existing programs are not effective, the report does not recommend introducing new programs before reviewing the current ones.

Donor agencies have been hesitant to release the money for SSDP citing the mid-term review. Sources present at one of the meetings said donors have questioned the government’s literacy achievement claims, and they are not keen on providing additional funds.

The World Bank and the Asian Development Bank (ADB) have questioned the government’s literacy achievement data and want to further verify the data, according to a source present at the meetings. The two agencies do not seem interested in providing additional money to support the SSDP, the source told Republica.

Prof Bharat Bilas Pant, one of the experts involved in the review, said that one of the problems in the effective implementing of SSDP is the delay in bringing the federal education act. Local governments have been entrusted to manage schools but laws are yet to be introduced, he said. “The government hasn’t been able to form a body to monitor schools,” Pant said.

Due to the prolonged political transition and the lack of oversight mechanism, we have recommended reviewing time-frame and programs of the project,” Pant added.

The government has selected model schools and they have even received the needed money but do not have resources to design learning activities and implement them. While primary level school enrollment has increased, the dropout rate is still very high, Pant said.

Deepak Sharma, director and spokesperson at the Center for Education and Human Resource Development, said the government and donor agencies are currently involved in serious discussions on SSDP. “The mid-term review has given us mixed results, and the lack of effective data collection system is complicating SSDP implementation,” added Sharma. If we can’t achieve the stated objectives, then donors won’t give us money, Sharma said.

Similarly, Smita Gyawali, senior education officer at ADB-Nepal, said they are involved in discussions with the government to figure out ways to take forward SSDP in light of the mid-term review.

KATHMANDU, Oct 5: The government of Japan has agreed to provide a grant assistance of Rs 308 millions for the... Read More...

KALIKOT, August 10: The School Sector Development Program (SSDP) has been found to be ineffective in bringing about any improvement... Read More...