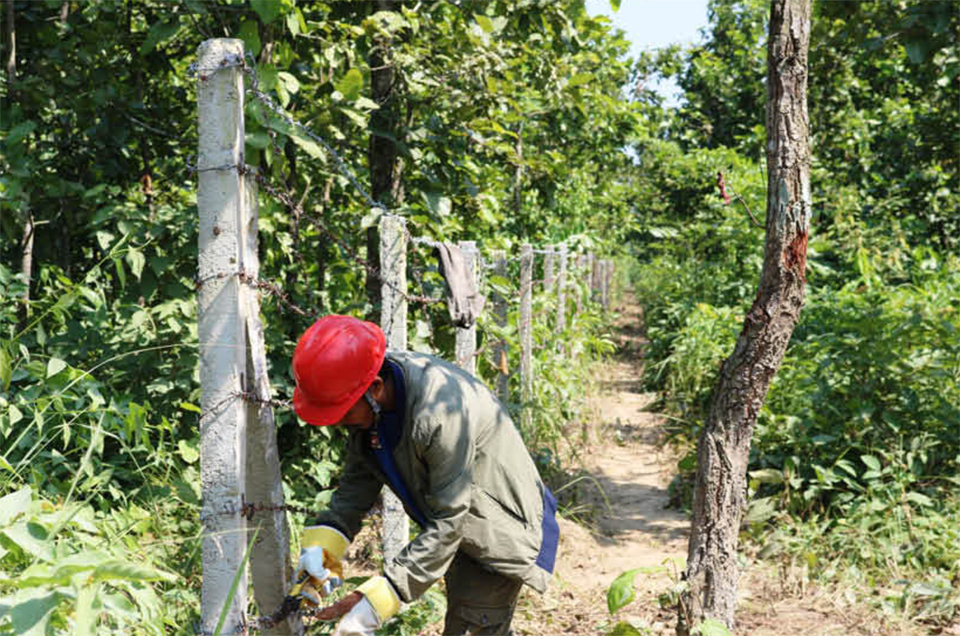 A worker installs perimeter wire at the construction site of second international airport in Nijadh of Bara. Photo: Upendra Yadav/Republica

BARA, Sept 5: Second International Airport (SIA) Project Office has said that the process of distributing compensation for land and houses to be acquired for the project is at its last leg. Similarly, perimeter fencing and river training works are also nearing completion, according to the project office.

Officials of the project told Republica that Rs 600 million have already been spent at the airport site.

Of the 110 bigha of registered land to be acquired for the project, the office has already distributed compensation for owners of 63 bigha of land. The process of distributing compensation to remaining owner is nearing completion, Bijay Yadav of Implementation Unit Office of Second International Airport Project told Republica. "We have already distributed Rs 430 million as compensation," he said, adding: "Similarly, we have spent Rs 140 million for perimeter fencing and river training works."

The office spent Rs 27.8 million for perimeter fencing and Rs 30.83 million for river training works, said Yadav.The airport will be spread over 11,875 bigha, according to Om Sharma, chief of the Implementation Unit Office.Fencing in about 35 kilometers of the airport perimeter was completed in the last fiscal year. Remaining fencing works are at the last stage, according to Sharma.

"We are at the final stage of demarcating and fencing 11,875 bigha of land that will be required for the airport," Sharma said.

Sharma also said it will be easier to build four-kilometer runway at the very place where Tangiya Basti is located.

Ichhya Bahadur Wagle, a hotelier, lamented slow work progress at the second international airport construction site. "We have been hearing about construction of international airport in Tangiya Basti since long. But works are not progressing in the desired pace," he said. Wagle, however, added that the airport will open up new avenues for investment in Bara district as well as the entire Province 2.

"As the airport will create many jobs and usher in development in the area, the government should clear all hurdles and start construction at the earliest," added Wagle.

Anjan is making Nepal visible in Israel
7 hours ago

Anjan is making Nepal visible in Israel
7 hours ago