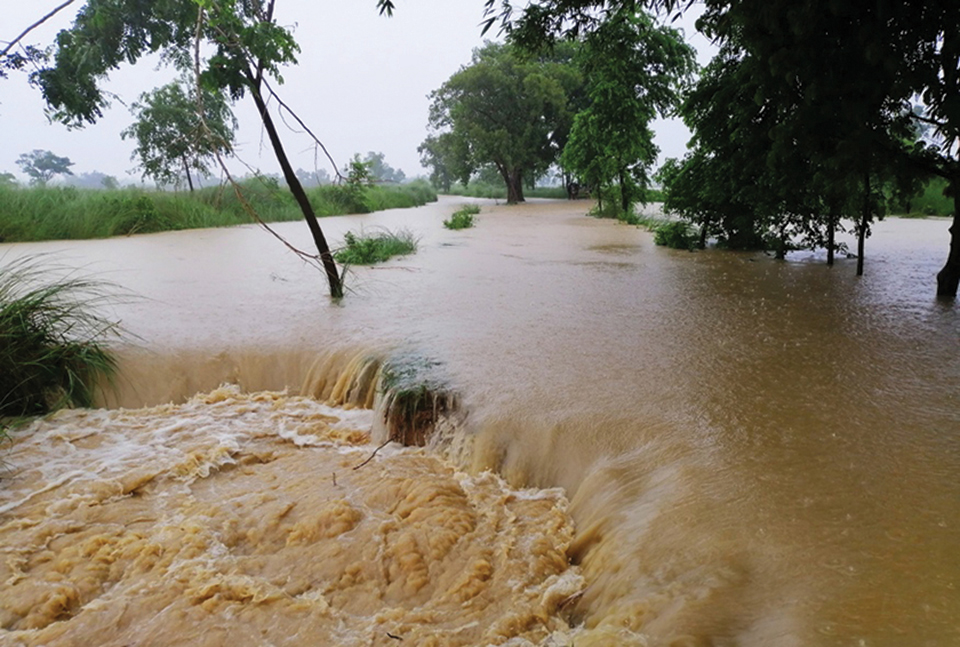 Nearly 70 people died due to a monsoon landslide in Myanmar’s Mon State. According to officials, the landslide took place when the mountain side of Ma-lat mountain collapsed due to heavy rainfall in Paung township in early hours of August 9. The remains of the collapse buried residents, houses and vehicles, reports said.

Hundreds of people are killed and thousands of families are displaced due to flood and landslide in the Least Developed Countries (LDCs) around the world. The United Nations has categorized 47 countries in Asia, the Pacific and Africa as the LDCs. They are low-income countries confronting severe structural impediments to sustainable development, are highly vulnerable to economic and environmental shocks and have low levels of human assets.

“Low-income countries will remain on the frontline of human-induced climate change over the next century, experiencing gradual sea-level rises, stronger cyclones, warmer days and nights, more unpredictable rains, and larger and longer heat-waves,” warned a report published by the United Nation’s Intergovernmental Panel on Climate Change (IPCC) in 2013. Six years down the line, situation seems to be getting worse.

The LDC Watch, a network of civil society organizations from Global South, calls for mitigation and adaptation support to LDCs to deal with the impact of the global warming.

“Although the Paris Agreement has agreed upon the ambition to keep the global average temperature well below 2°C above pre-industrial levels, (we believe that) the limit of 1.5°C should be adhered through comparable action Pre-2020 and continuing in Post 2020,” the Group said in its position paper.

During the 22nd Conference of Parties (COP22) as part of the United Nations Climate Change Conference held in Marakkech, Morocco in 2016, two initiatives were launched targeting the LDCs. First, the Renewable Energy and Energy Efficiency initiative (REEEI) was launched with a view to scale up the provision of renewable energy to LDCs and promoting energy efficiency. Second, the African Adaptation Initiative was launched that aimed at strengthening and supporting small-scale adaptation actions to access financial support.

Adaptation measures
With the impact of climate change increasing in frequency and intensity, it is vital that LDCs implement adaptation measures to safeguard their populations and the international community fulfill its commitments to provide financial, technology transfer and capacity support to vulnerable societies, said a Briefing Paper published by the London-based International Institute for Environment and Development (IIED)—a think tank—in June this year. “LDCs should use a whole-of-government and whole-of-society approach to develop the scope of the sectors they include in their updated NDCs (Nationally Determined Contributions) and comprehensively outline their resource needs. The sum of adaptation interventions across the (I) NDCs is approximately US$167 billion. Based only on the documents that explicitly state costs, this represents a narrow coverage of sectors across different timeframes. The total required adaptation costs are necessarily higher,” the Paper said.

The international community should use the information in LDCs’ existing (I)NDCs as a guide for channeling support and utilize the United Nations Secretary General’s Climate Summit in September 2019 to reaffirm their commitments to support the poorest and most vulnerable and accelerate support for adaptation to ensure the implementation of the Paris Agreement, authors Sejal Patel, Neha Rai and Sarah McIvor said in their paper.

A 2012 study by the United Nations Economic and Social Council (ECOSOC) identified climate change as the impending factor that would add additional burden to some LDC countries, and thus, may delay their graduation into developing nations. Climate change vulnerability of those countries depending on agriculture and natural resources for national income are likely to suffer more seriously than those dependent on other resources such as mining. Their high degree of vulnerability is directly linked with their limited adaptive capacity and higher exposure.  In 2018, Nepal postponed its graduation to the status of developing nation from existing LDC group citing its lower per capita income and looming risks of climate change and others that may reverse the achievements made on human development front.

Two years from now, Qatar will be hosting the fifth United Nations Conference on LDCs which will assess the implementation of the Istanbul Programme of Action (IPoA) adopted by the UN LDC IV that was held in Istanbul in 2011.

The mid-term review of the Istanbul Programme of Action (IPoA) published by the UNCTAD Secretariat in 2016 states that “(in) absolute dollar terms, official development assistance to LDCs rose by 2 per cent in 2013 to $44.2 billion, accounting for 93 per cent of total official capital flows. However, preliminary estimates show that bilateral official development assistance from major donors to LDCs fell by 16 per cent in real terms from 2013 to 2014.”

The Istanbul Programme of Action comes to a close in barely two years.

Time for action
“If actions in all of the program’s eight priority areas are not stepped up, the sustainable development promises the global community agreed on in Istanbul will not be delivered. We estimate that a third of the nearly one billion people living in the LDCs will thus be put at a risk of remaining in extreme poverty and deprivation even beyond 2030. LDCs and their development partners, including the UN system, need to scale up efforts to make a real difference,” said The State of the LDCs 2018 report published by the United Nations Office of the High Representative for the Least Developed Countries, Landlocked Developing Countries and Small Island Developing States (UN-OHRLLS). To sum up, the delayed progress toward building resilient societies of LDCs is practically leading them toward more vulnerable situations when colossal losses of lives and properties would be a new normal particularly in the poorest countries of the world. The time for action is NOW.

Senior Research Fellow at Southasia Institute of Advanced Studies, Dahal is currently serving as the Chairperson of Nepal Water Conservation Foundation. Yogi is a Nepali journalist based in London and writes on development issues
ngamindra@gmail.com
bhagirath.yogi@gmail.com

WEATHER ALERT: Light rainfall predicted in some parts of Province 1

KATHMANDU, September 1: The weather is expected to be partly to generally cloudy in most parts of the country with... Read More...

Six including four of a family killed in Rolpa landslide

Jaya Budha’s family had come to sleep in the house after feeling insecure to live in their own house. Unfortunately,... Read More...

SARLAHI, July 22: Most of the southern areas of Sarlahi including the district headquarters Malangawa are prone to inundation every... Read More...