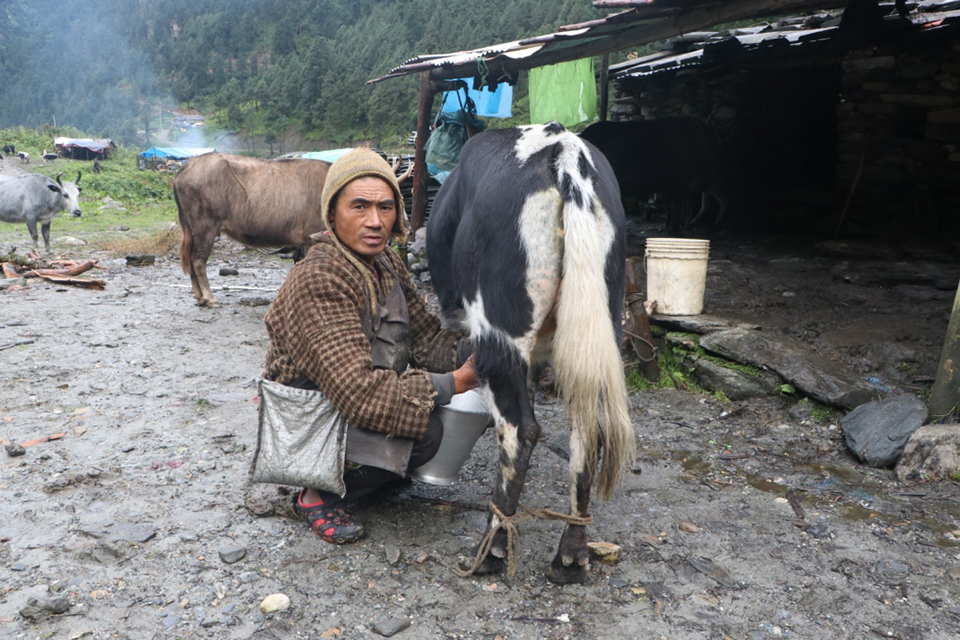 DHADING, Sep 1: The farmers of Ruby Valley Rural Municipality located in the northern area of the district are reliant on yak farming for several generations. However, in a lack of livestock insurance, they are prone to suffer heavy losses from time to time.

Singha Thapa, a farmer from Tipling, said that though the income is good, sometimes yaks die unexpectedly.

"We have been suffering from loss as they die of disease or fall from cliff," he said. "Death of a yak means a great loss for us."

Farmers take yaks to pasturelands of Pangsang, Babil, Dhading and bordering area of Rasuwa for grazing. Thapa has 35 yaks in his herd and spends most of his time caring for the herd, feeding them and taking them to pastureland. He said when it snows, yaks die falling from cliffs while coming back from grazing. "Yaks have added to the income but sometimes we have to suffer huge losses," he said. "As no insurance program caters to us, we have been suffering losses worth millions.”

A total of 23 yaks died due to snowfall at Tipling and Somdang in February. Dozens of yaks remained hungry and farmers underwent hardships to transport food for their herds as the snowfall had covered the grasses they could feed on.

Yak farmers find it hard to save themselves and their herds when the ways are covered with snowfall. Yaks that go for grazing are covered in snow and later their bodies are discovered after their death.

A single yak can cost from Rs 50,000 to Rs 100,000 but there is no provision of insurance for their security. The livestock are not insured even if the farmers want it.

Insurance companies say it is not possible because the area is geographically remote and the livestock that are not confined cannot be insured, according to Dinesh Ghale, president of Dhading Yak Farmers' Association. "We are ready to insure the herds under livestock insurance policy instead of incurring millions of losses due to different disaster," he said, "Farmers are suffering big time as the insurance companies are reluctant to provide service."

Farmers of the area earn Rs 80,000 to Rs 100,000 from yak farming. Ghale said insurance companies show reluctance stating it is hard to prove the death of yaks. Yaks in Rasuwa district which shares border with Dhading are insured, those in Dhading are not insured. Farmers have been asking local government officials for help regarding insurance.

There are 500 yaks in 54 farms in the district. About 18 to 30 yaks are kept in a shed. The Dairy Development Corporation collects 600 liters of milk daily. The dairy sends the milk for the production and distribution of cheese, hard cheese, and butter.

DHADING, June 21:  Five killed and ten injured when a jeep met with an accident in Dhading. ... Read More...

DHADING, Jan 29: Locals in some of the villages in Dhading have been seeing electricity poles scattered along the roadsides... Read More...