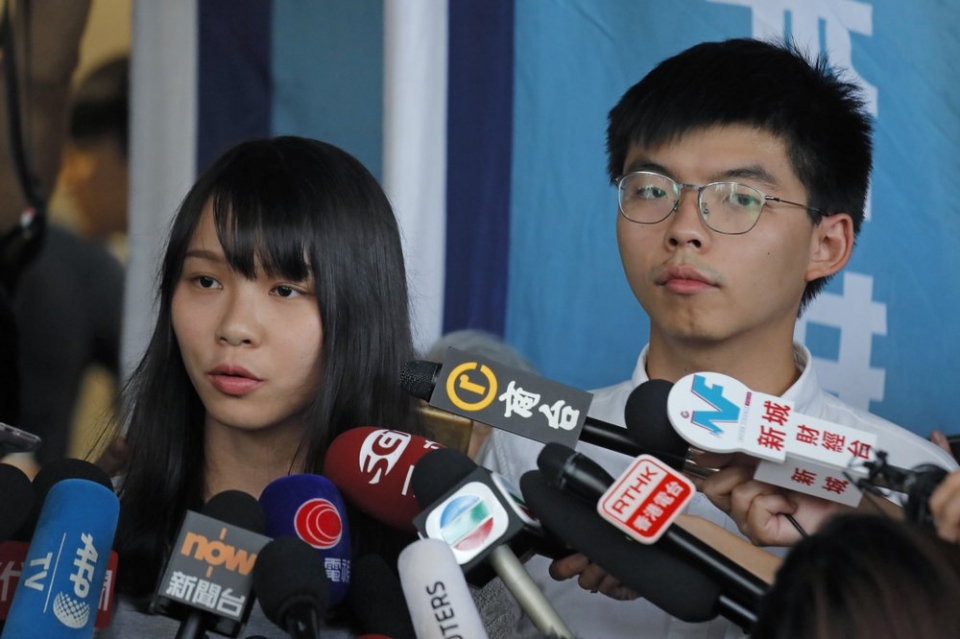 Pro-democracy activists Joshua Wong, right, and Agnes Chow speak to media outside a district court in Hong Kong, Friday, Aug. 30, 2019. Wong and Chow were granted bail Friday after being charged with inciting people to join a protest in June, while authorities denied permission for a major march in what appears to be a harder line on this summer's protests. (AP Photo/Kin Cheung)

HONG KONG, Aug 30: Hong Kong activist Joshua Wong and another core member of a pro-democracy group were granted bail Friday after being charged with inciting people to join a protest in June, while authorities denied permission for a major march as they took what appears to be a harder line on this summer’s protests.

The organizers of Saturday’s march, the fifth anniversary of a decision by China against allowing fully democratic elections for the leader of Hong Kong, said they were calling it off after an appeals board denied permission. It was unclear whether some protesters would still demonstrate on their own.

The police commander of Hong Kong island, Kwok Pak Chung, appealed to people to stay away from any non-authorized rallies, warning that those caught could face a five-year jail term.

He told a daily news conference that he was aware of social media messages urging people to take strolls or hold rallies in the name of religion. Kwok urged the public to “make a clear break with all acts of violence and stay away from locations where violent clashes may take place.”

Police have been rejecting more applications for rallies and marches, citing violence at or after earlier ones. They also are arresting people for protests earlier this summer, a step they said was a natural development as investigations were completed.

Andy Chan, the leader of a pro-independence movement, was arrested at the airport Thursday night under suspicion of rioting and attacking police. Three other protesters were taken in earlier this week for alleged involvement in the storming of the legislative building on July 1, when protesters broke in and vandalized the main chamber.

A leader of the Civil Human Rights Front, which had called Saturday’s march, said that Hong Kong residents would have to think about other ways to voice their anger if the police keep banning protests.

“The first priority of the Civil Human Rights Front is to make sure that all of the participants who participate in our marches will be physically and legally safe. That’s our first priority,” said Bonnie Leung. “And because of the decision made by the appeal board, we feel very sorry but we have no choice but to cancel the march.”

Police arrested Wong and Agnes Chow on Friday morning, both 22 and members of pro-democracy group Demosisto.

Wong, one of the student leaders of the Umbrella Movement in 2014, was released from prison in June after serving a two-month sentence related to that major pro-democracy protest. He has been speaking out regularly in support of the pro-democracy protests that have racked Hong Kong this summer.

They were later charged with participating in and inciting others to join an unauthorized protest outside a police station on June 21. Wong was also charged with organizing it.

“We will continue our fight no matter how they arrest and prosecute us,” Wong told reporters outside a courthouse after they were released on bail.

The protests were set off by extradition legislation that would have allowed suspects to be sent to mainland China to face trial and expanded to general concerns that China is chipping away at the rights of Hong Kong residents.

The extradition bill was suspended but the protesters want it withdrawn and are also demanding democracy and an independent inquiry into police actions against protesters.

Demosisto first reported the arrests on its social media accounts, saying Wong was pushed into a private car as he was heading to a subway station around 7:30 a.m. and was taken to police headquarters. It later said Chow had also been arrested, at her home.

Chow echoed Wong’s comments, saying “we Hong Kong people won’t give up and won’t be scared ... we will keep fighting for democracy.

BEIJING,  Aug 22: An employee at the British consulate in Hong Kong has been detained in China for involvement in... Read More...

BEIJING, July 24: China’s central government is pointing to an article in Hong Kong law that allows the army to... Read More...