KATHMANDU, Aug 21: The fifth meeting of the Nepal-India Joint Commission was concluded in Kathmandu on Wednesday evening.

During the meeting, both the sides reviewed the entire gamut of bilateral relations with specific focus on the areas of connectivity and economic partnership; trade and transit; power and water resources sectors; culture, and education, according to a press release issued by Ministry of Foreign Affairs late Wednesday.

The joint commission expressed happiness over the momentum generated in the overall aspects of Nepal-India relations following the exchange of high-level visits in the past two years, the press release said.

"Views were exchanged on the review of Treaty of Peace and Friendship of 1950 and submission of report of the Eminent Persons Group on Nepal-India Relations (EPG-NIR). Matters related to cooperation in international, regional and sub- regional fora were also discussed," stated the press release. 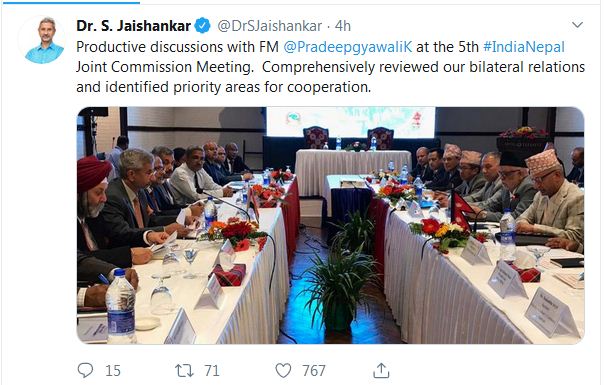 The joint commission has expressed happiness at the progress made in the bilateral projects, such as Motihari- Amlekhgunj Petroleum Products Pipeline, four segments of Hulaki Roads, and post-earthquake reconstruction of private housing in Nuwakot and Gorkha districts which have been completed.

They expressed happiness over progress made in Jayanagar-Janakpur and Jogbani-Biratnagar sections of cross-border railway projects and Integrated Check Post in Biratnagar. The joint commission agreed to expedite the early completion of remaining projects which was agreed between the two sides in the past.

Both sides agreed to an early conclusion of the review of treaties and agreements related to the trade, transit and rail services. They also agreed to continue upgradation and maintenance of infrastructure and logistic facilities at major border crossing-points for facilitating trade and transit between the two countries.

Noting that inundation is a serious problem for people living in border areas, the joint commission underlined the need for addressing inundation issues due to, among other things, the inadequate drainage provision that obstructs the natural flow of water in border areas.

During the meeting, the two ministers emphasized the importance of tourism in socio-economic development and agreed to enhance their cooperation in tourism sector, particularly in the context of Visit Nepal Year 2020.

On Nepal’s request for additional air entry routes to Nepal, it was stated that discussion which are underway between the civil aviation authorities of the two countries would yield positive results, according to the press release.

Nepal-India Joint Commission is a foreign minister-level bilateral mechanism between the two countries established in June 1987.

The commission is mandated to review the entire gamut of bilateral matters and its meetings are held alternately in Nepal and India. The last meeting of the Joint Commission was held in New Delhi in October
2016.

Minister for Foreign Affairs Gyawali hosted a dinner in honor of the Indian delegation.

Jaishankar paid a courtesy call on Prime Minister K P Sharma Oli today afternoon. During the call on, various issues of mutual interests were discussed, according to MoFA. 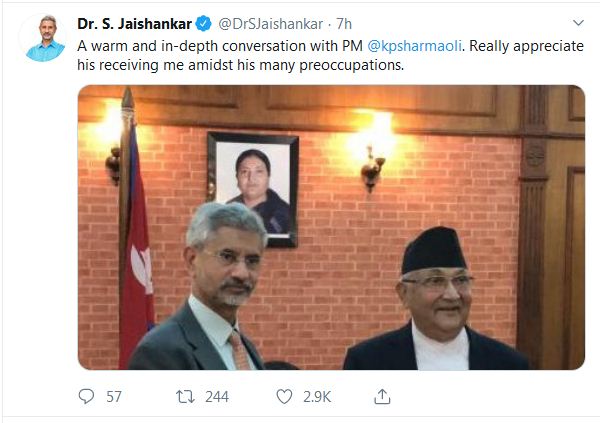