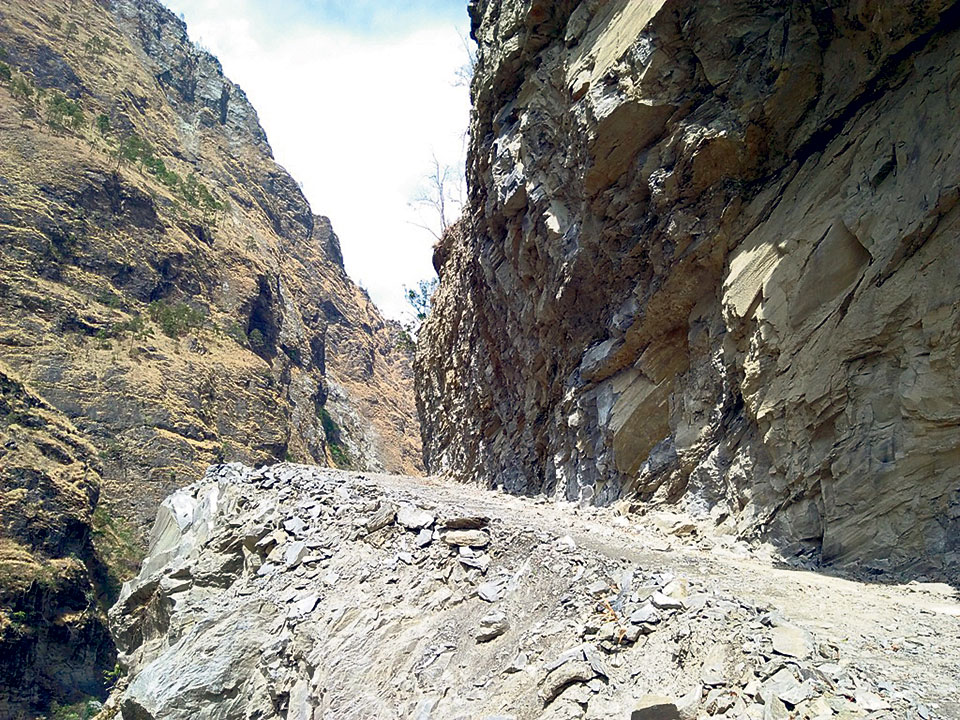 RASUWA, Aug 18: The Ministry of Finance has approved budget for upgrading Mailung-Syafrubesi section of Galchhi-Rasuwagadhi Road.

The Galchhi-Trishuli-Mailung-Syafrubesi-Rasuwagadhi Road Project had sought Rs 3.57 billion for the up-gradation. But the ministry has approved only Rs 2.61 billion 16-kilometer road section.

But project officials say that the budget approved by the ministry will not be sufficient for the work. Project Head Narayan Dutta Bhandari said that the project was preparing to spend Rs 1.58 billion from its fund to complete the up-gradation work.

According to Bhandari, the project will have to provide compensation to locals for land acquired for the project from the Rs 2.61 billion that will be provided by the ministry.

“We hope to sign a contract with construction companies for the up-gradation by the end of this year,” he added.

The up-gradation work has to be completed within three years from the date of signing the contract.

The road section is obstructed at present due to landslide. The project office had also sought budget from the ministry to clear the debris. But the project was denied additional fund.

GALCHHI-MAILUNG SECTION ACHIEVES 50% PHYSICAL PROGRESS
Nearly 50% of the work of Galchhi-Mailung section has been completed.

While blacktopping has been halted for the time being, works like building drainage and sidewall, and earthworks are undergoing, according to the project office.

DETAILS OF LAND ON SYAFRU-RASUWAGADHI SECTION BEING COLLECTED
The process of collecting ownership details of land to be acquired for up-gradation of Syafru-Rasuwagadhi section has begun.

The section is to be upgraded by the Chinese government. According to the project, the Chinese side will start work on the section from October.

Chief District Officer of Rasuwa Arjun Bhandari said that the local administration will start clearing right of way for the up-gradation after collecting land records.

Utility poles, drinking water pipes, houses and other structures have to be removed from the road section before the Chinese team arrives. Langtang National Park Office, Land Registry Office, Land Revenue Office, local bodies and Sub-Division Office of Department of Urban Development and Building Construction have started work in coordination with the Galchi-Trishuli-Mailung-Syafrubesi-Rasuwagadhi Road Project, according to Bhandari.

The detailed project report (DPR) of the Syafrubesi-Rasuwagadhi road section has already been prepared. The Chinese side has awarded the contract to upgrade the section to Tianjin Municipal Engineering Design and Research Institute of China.

KATHMANDU, June 16: Budget constraint has been cited as the main reason behind a delay in completing the 16- kilometers... Read More...