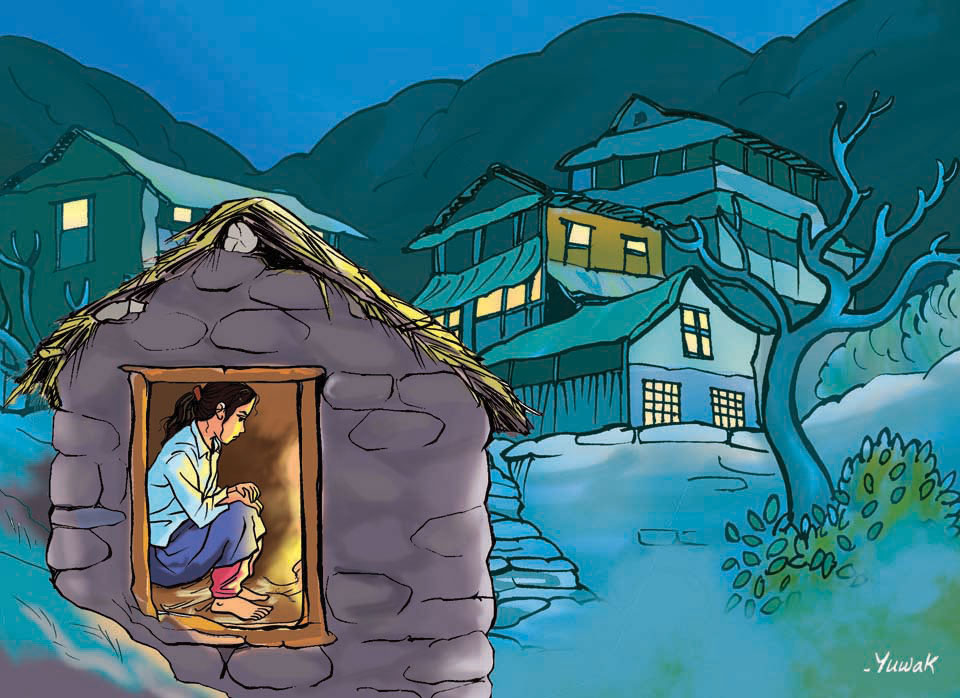 Chhaupadi is rooted in ignorance and unfounded fears, another reason why it must be completely eradicated

Chhau is a tradition associated with the menstrual taboo in the western part of Nepal. This tradition prohibits Hindu women and girls from participating in normal family activities during menstruation as they are considered impure. Women are required to live in a cattle-shed or hut during menstruation.  Moreover, they are restricted from participating in family and community events. They are prohibited from consuming milk, butter, meat, and other nutritious foods. They are made to undergo this harmful practice for as many as seven days a month.

Chhaupadi originates from the superstition that menstruations cause women and girls to become temporally impure. It is believed that if menstruating women or girls touch a tree, it will never again bear fruit, if they consume milk, the cow or buffalo will not give milk anymore and if they read book, Saraswoti, the goddess of wisdom, will be furious. If they touch men, they will be ill, goes the superstitious belief. Such practice prevails in rural areas of western and far-western Nepal.  Achham, Bajjhang, Baitadi, Bajura, Doti, Mugu, Jumla, Dailekh, Kalikot, Kailali and Darchula are mostly affected by this practice.

Chhaupadi is wrong for multiple reasons. First, it creates multiple health and safety risks for women and girls. They suffer from pneumonia and diarrhea while living in cowsheds. Sometimes they are bitten by poisonous snakes, attacked by wild beasts and even raped. Others die of suffocation inside the huts. Isolation of menstruating women for a prolonged period of time with no one to talk to or share their feeling or grief can lead to depression in the long run.

Chhaupadi practice violates human rights of women. Universal Declaration of Human Rights states that everyone has the right to live with adequate health care, food, clothing, housing and necessary social service.  Chhaupadi violates the right of women as human beings. It is an extreme case of discrimination against women in the name of myths and stereotyped dogma. International Convention on Elimination of All kinds of Discrimination Against Women (CEDAW) stipulates that state parties shall take all appropriate measure to modify the social and cultural pattern of conduct of men and women, with a view to achieving the elimination of prejudice and all other practices based on the idea of inferiority or superiority of either sexes. Chhaupadi violates this recommendation too.  Chhaupadi is rooted in ignorance and unfounded fears, another reason why it must be completely eradicated.

In case of Dilbahadur Bishwokarma Vs Council of Minister of Nepal and others in 2005 Supreme Court of Nepal made a landmark decision ruling on Chhaupadi custom declaring it a malpractice and issued a directive to the government to eliminate it. Consequently, the government formulated Chhaupadi Practice Elimination Directive in 2008. New Criminal Code Act has made it a punishable offence. According to this law, people who force women to live at Chhaupadi , during menstruating period , will be slapped up to three months in jail and a fine of 3000 rupees,  or both.

Constitution has guaranteed that no person shall be treated with any kind of untouchability or discrimination in any private or public place on ground of caste, ethnicity, origin, community, occupation or physical condition. All forms of untouchability or discrimination shall be punishable by laws and victims of such acts shall have the right to compensation as provided for by law. The constitution also states that every woman shall have the right relating to safe motherhood and reproductive health. There shall not be any physical, mental, sexual, or psychological or any kind of violence against women. Laws do not support any kinds of oppression based on religious, social and cultural tradition.

Chhaupadi practice is harmful to the society as a whole. Menstruation is a natural phenomenon for women and girls. It is not appropriate to connect it with belief in God and Goddess. No Hindu books have prescribed seclusion of women and girls during menstruation. There is nothing to support secluding women at cowsheds or huts when they are weak and vulnerable.

Menstruating women require safety, sanitary pad, nutritious food, love, care and support. It is immoral to subject them to seclusion during menstruation. A harmful practice and superstition does not help us attain development and prosperity. Local governments need to raise a campaign against it or prepare an action-plan to eradicate this tradition.

Supreme Court verdict and various laws have outlawed Chhaupadi and called it a criminal offense. Thus Chhaupadi is a crime against women and girls. Civil society, media and other stakeholders need to stand against it together. While enforcing law is vital, we also need to change our mindsets, attitudes, social belief and stereotyped-dogma associated with Chhaupadi.

SURKHET, March 4: Three people have been killed and four others sustained injuries in a road accident in Surkhet district... Read More...

Substation at Nawalpur comes online, electricity supply expected to be reliable
16 hours ago