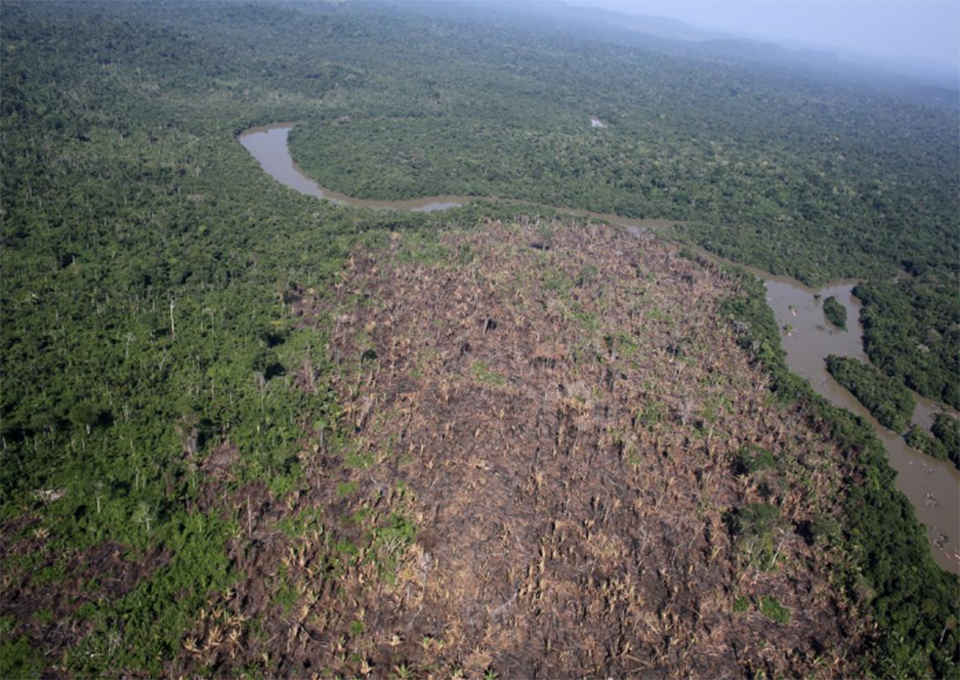 An aerial view of a tract of Amazon jungle recently cleared by loggers and farmers near the city of Novo Progresso, Para state, Brazil, September 22, 2013. REUTERS/Nacho Doce

BRASILIA, August 17: Brazil’s backsliding on Amazon conservation under right-wing President Jair Bolsonaro and a likely Peronist return to power in Argentina could delay or even derail ratification of an EU-Mercosur trade agreement that took two decades to negotiate.

Deforestation has surged since Bolsonaro’s election last year. His plans to develop the Amazon and moves to weaken rainforest protection have alarmed environmentalists and given ammunition to European opponents of the trade deal with the South American common market.

“Nobody imagined he would dismantle Brazil’s command and control mechanisms for protecting the environment so fast and effectively,” Sarney said in a interview.

He said Bolsonaro has deliberately demoralized environmental agencies and given wildcat miners an incentive to cut down trees and invade indigenous reservations.

Brazil’s presidency did not respond immediately to a request for comment.

Sarney pointed to a “high risk” that some EU parliaments, particularly in big farming countries such as France, will not ratify the accord concluded last month with Brazil, Argentina, Uruguay and Paraguay.

French President Emmanuel Macron warned in June he would not sign the EU-Mercosur pact if Bolsonaro pulled Brazil out of the Paris climate accord.

Amid deepening tensions with France over climate change policy and the environment, Bolsonaro suddenly canceled a July 29 meeting with French Foreign Minister Jean-Yves Le Drian - and went for a haircut instead.

Germany and Norway have suspended donations to a $1.2 billion fund to back sustainable projects in the Amazon after the government shut down the steering committee that selects projects and planned to use it to compensate farmers who had land expropriated in protected areas.

Bolsonaro, a nationalist who has attacked foreign interference in the Amazon, retorted that Brazil had nothing to learn from European nations and did not need the money. He said the funds should be used to reforest Germany.

European diplomats and analysts said Bolsonaro’s stance on the Amazon will fuel opposition to the Mercosur agreement, which has already faced protests.

“You have a president who is basically torpedoing this deal, not only with his environmental policy, but with the way he presents it to the world,” said Oliver Stuenkel, international affairs expert at the Getulio Vargas Foundation in Sao Paulo.

“There are a growing number of voices particularly in France and Germany saying that unless this policy changes the EU should no longer ratify the deal,” Stuenkel said.

Deforestation in Brazil more than tripled in July over the year, data from Brazil’s INPE space research agency shows. Bolsonaro attacked the data as misleading and fired the agency’s head.

Brazil’s powerful agribusiness sector, which managed to convince Bolsonaro not to withdraw Brazil from the Paris accord, is worried his stance on the Amazon could lead to a boycott against their exports.

“Brazil will have to prove that it can produce its products in a sustainable way, without adding to deforestation,” former minister Teixeira told Reuters. “Today countries are questioning Brazil’s credibility.”

Sunday’s primaries in Argentina put the EU-Mercosur deal under a new cloud of uncertainty as Peronist candidate Alberto Fernandez emerged as the odd-on favorite to win the presidential election in October.

He has said he wants to renegotiate parts of the trade deal that do not suit Argentina. That could unravel the agreement given the rising resistance in Europe.

“If Fernandez is elected and wants to renegotiate parts of the accord, it would have to be reopened entirely. We would be back to square one,” a European diplomat in Brazil said on condition of anonymity due to the sensitivity of the matter.

While Fernandez is a moderate Peronist, his running mate is former Argentine President Cristina Fernandez Kirchner, a protectionist who is no fan of the EU deal.

“The pressure on him to not just accept and wave though this agreement is quite significant,” said Stuenkel.

Brazil’s foreign ministry declined to comment on the prospects for the EU-Mercosur agreement if Fernandez wins.

Foreign Trade Secretary Marcos Troyjo defended Brazil’s policy on the Amazon, saying, “The environmental policy of this government is the intelligent use of the country’s natural resources.”