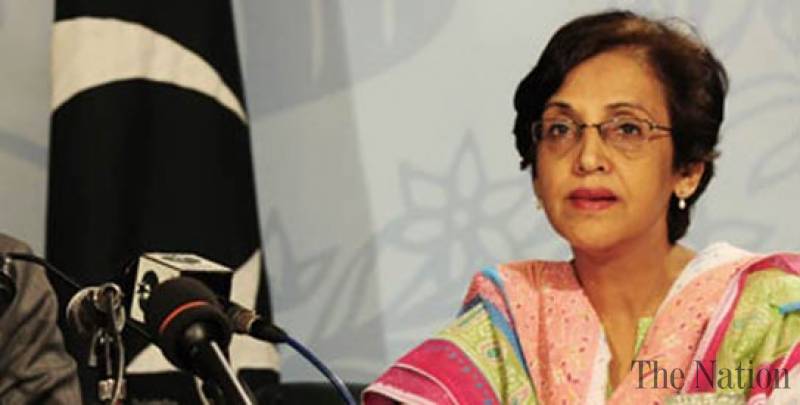 KASHMIR, Oct 12: Pakistan’s Permanent Representative to the United Nations in Geneva Tehmina Janjua has deplored Indian hegemonic designs and called for a resolution of the Kashmir dispute.

Addressing at UN’s International Security Committee in Geneva on Tuesday, Janjua said Pakistan’s security was fundamentally challenged by the introduction of nuclear weapons in its neighbourhood.

She referred to Prime Minister Nawaz Sharif’s address to the UNGA this year in which he underscored Pakistan’s resolve to maintain strategic stability in South Asia.

Janjua said peace and stability in South Asia would not be possible without resolving underlying disputes, including Jammu and Kashmir dispute, agreeing on measures for nuclear and missile restraint and instituting conventional forces balance.

She said Pakistan had always demonstrated its commitment to peace and stability in the region.

The ambassador said Pakistan had positioned itself as a mainstream partner in the international non-proliferation regime as well as the global efforts to strengthen nuclear security and safety.

She said that a non-discriminatory and criteria-based approach should be followed for expanding Nuclear Suppliers Group’s membership to strengthen the non-proliferation regime in an equitable manner.

Meanwhile, during the General Assembly’s first committee debate, which deals with disarmament and international security matters, Pakistan also asked India why it had not responded to its proposal for the establishment of Strategic Restraint Regime.

Pakistan said that the test was conducted by diverting nuclear technology and material from a reactor that was supplied to it for peaceful uses; its continuation of development of nuclear weapons in utter disregard of numerous offers and proposals by Pakistan to keep South Asia free of nuclear weapons and India’s rejection of a resolution by Pakistan in the General Assembly for establishment of Nuclear Weapons Free Zone in South Asia, year after year.

India later conducted its second nuclear weapons test in May 1998 after the conclusion of CTBT.

“Pakistan was left with no option but to have nuclear capability as an existential choice in order to restore strategic balance in the region”, the representative said.

Pakistan made a statement in exercise of the right of reply when India levelled baseless allegations against Pakistan in its response to the statement delivered by Ambassador Tehmina Janjua in which Pakistan’s proposal for establishment of a Strategic Restraint Regime in South Asia was presented once again.

India had alleged that Pakistan was responsible for blocking progress in the Conference on Disarmament and that persistent violations that had increased proliferation threats were linked to Pakistan’s activities.

Inviting attention to Indian deception, Pakistan’s representative said that India joined the Chemical Weapons Convention (CWC) in 1996 as a chemical weapon possessor state, despite its bilateral MoU with Pakistan just four years ago, in 1992, through which it had committed that it did not intend to develop or possess chemical weapons.

Ammar said, “Despite numerous proposals by Pakistan to establish a strategic restraint regime in South Asia, India was continuously enhancing its strategic and conventional offensive military capabilities including the production of weapon grade fissile material, development and testing of several ballistic and cruise missiles, and the introduction of nuclear submarines”.

He invited attention of the committee to the fact that India was also trying to find space below Pakistan’s perceived nuclear threshold to fight a conventional war. “Those developments had compelled Pakistan to take appropriate counter measures to deter all forms of aggression”, he added.

In response to Indian allegations on sponsoring terrorism, Pakistan’s representative said that it was unfortunate that when India was shown the reality of the ‘Indian hegemonic policies’ in the region that directly affected its neighbours, it always chose to divert attention of the international community from those irresponsible actions by making frivolous comments.

“We do not have to repeat what the world knows about India and its diversion of fissile material obtained for peaceful purposes in building its first nuclear bomb, which it had the audacity to call smiling Buddha”, he added.

Pakistan concluded by asking India for an urgent response to the proposal made by the Prime Minister of Pakistan for a bilateral arrangement between India and Pakistan on a nuclear test ban.

ISLAMABAD, Nov 3: Pakistan on Thursday named eight Indian diplomats it accuses of espionage and terrorism, as tension mounted between the... Read More...