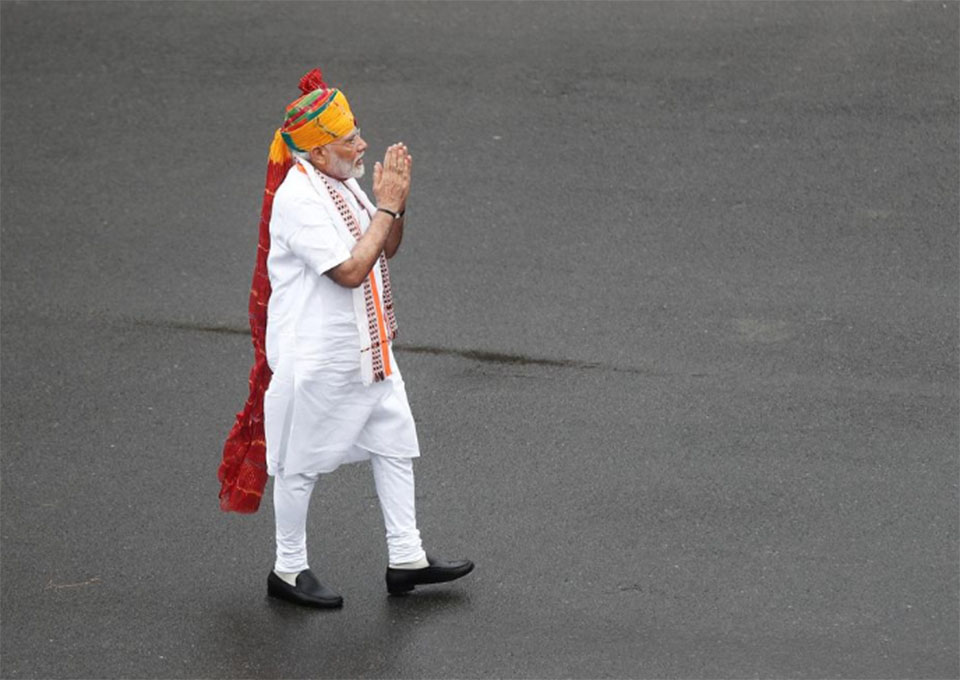 MUMBAI, August 15: Indian Prime Minister Narendra Modi delivered an Independence Day speech on Thursday that spotlighted a decision to remove the special rights of the disputed Himalayan region of Kashmir among the bold moves of his second term.

Modi talked about his aim to turn India into a $5-trillion economy within five years, by spurring wealth creation, boosting exports and tourism, and spending 100 trillion rupees ($1.4 trillion) on infrastructure.

But he did not touch on sagging demand that has hit parts of the economy in recent months, especially the auto sector.

Modi said special constitutional status for the state of Jammu and Kashmir had encouraged corruption and nepotism, while creating injustice for women, children and minority communities in India’s only majority-Muslim region.

“Today every Indian can proudly say ‘One Nation, One Constitution’,” Modi, speaking from the ramparts of the historic Red Fort in New Delhi, said of the decision.

Critics of the policy say it will bring a backlash from Kashmiri Muslims who had valued the previous ban on non-residents buying property in the state, part of which is claimed by Pakistan, and benefited from the reservation of state government jobs for residents.

Since the Aug. 2 decision, the region has been under a clampdown, with internet and phone links cut off by authorities, movement restricted by police roadblocks, and more than 500 local leaders and activists detained.

Wearing a flowing bright saffron-colored turban, Modi, who won a landslide election victory in May, also highlighted his government’s ban on some Muslim communities’ practice of allowing a husband to instantly divorce his wife.

Perhaps the most controversial announcement in Modi’s speech was the creation of a new post of chief of defense staff, to ensure better coordination between India’s army, navy and air force, along the lines of Western military forces.

Defense experts have long called for such a post, recommended by a government panel in 1999, after India came close to war with Pakistan over Kashmir.

“Our forces are India’s pride,” Modi said. “To further sharpen coordination between the forces, I want to announce a major decision ... India will have a chief of defense staff.”

However, he did not address the weakening economy and calls by industry for a swift package of government measures to stimulate demand.

India’s growth rate has fallen to 5.8% for the three months ended March 2019, its lowest in 17 quarters, while research group CMIE estimates the jobless rate rose to 7.51 percent in July from 5.66 percent a year earlier.

Modi said he would invest 100 trillion rupees in infrastructure over the next five years and a further 3.6 trillion to improve water infrastructure and pipe clean water to every home.