DANG, Aug 14: Lamahi Cricket Ground is seen as one of the potential venues for hosting international cricket matches with the local authorities expediting the under-construction infrastructures which meet the required standards of International Cricket Council (ICC).

The project is led by Lamahi Municipality Development Committee and undertaken by Deukhuri Cricket Association for the last few years.

It has 80 meter radius which is sufficient as per the ICC’s minimum 60-70 meter parameters for hosting international matches. Five playing turfs have been built at the ground whereas 35,000 fans can enjoy the match at once.

“The in-field works are already completed. The construction around the ground is progressing rapidly as well,” said Pawan Rijal, president of the Association.

Similarly, practice nets are set up inside the perimeter whereas other necessary facilities are under-construction to meet the entire requirement needed to host an international match.

The numbers
The Development Committee had allocated the budget of Rs 20 million at the start of the construction. Later, the Provincial Government contributed Rs 7.5 million. Similarly, the committee further allocated Rs 35 million for infrastructure development which was boosted by Province’s additional Rs 1 million.

The ground, which is in the final phase, however did not receive any budget from the province government in the current fiscal year. Rs 2.5 million from 7.5 million that had been allocated last year by the province has remained unspent.

The venue
The cricket ground is situated centrally at the western part of Nepal at Lamahi connecting major cities like Nepalgunj, Butwal and Bhairahawa. It will encourage large number of fans traveling from those cities in the southern part of the country.

The area in Lamahi was left unused for years despite being proposed for the construction of a cricket ground with an international standard. In 2018, it gained pace after Nepal national team gained ODI status and formation of the provincial government. Before that, the area was used only for grazing-land, hosting local festivals and as a venue to learn driving skills for locals.

The potential
The venue has been taken as an ideal place for development of local sports, especially cricket. The professional and semi-professional players who had been training at other inconvenient places have now started spending time at the ground.

“It will help the budding cricket players to learn and sharpen their skills at the proper ground. They can not only dream to play for Nepal but play in front of their own home crowd some day,” said Rijal.
The Lamahi Cricket Ground recently hosted 8th National Games for women’s national cricket proving its suitability for hosting national as well as international games.

Similarly, players from India and other provinces are also visiting Lamahi to practice at the ground due to its proximity to the Indian bordering towns, according to Rijal. 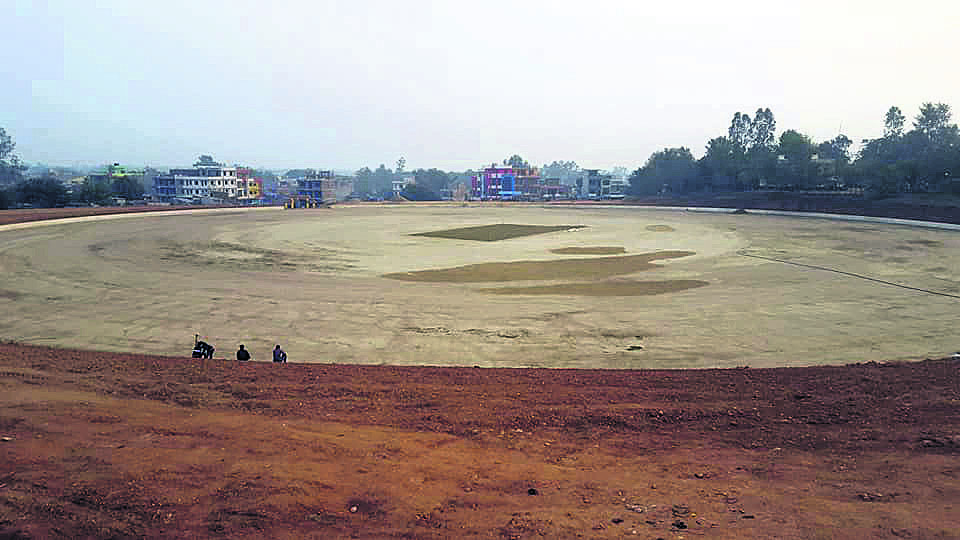