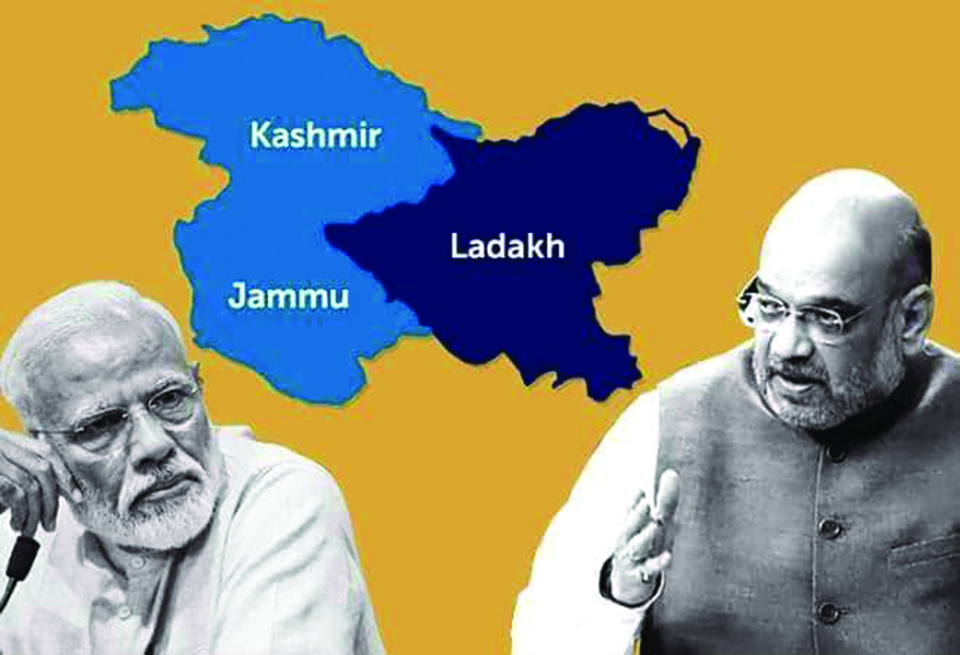 Does the change of status for Jammu and Kashmir and the search for a Congress leader tell us something about the nature of political leadership in India?

It was a weekend of historic upheavals in India. An eerie silence continued to envelop the Indian state of Jammu and Kashmir. Last week, the government of Narendra Modi revoked Article 370 of the Indian constitution, which had granted Jammu and Kashmir special status, and introduced legislation to reorganize the state into two union territories.

It was equally tumultuous, if not as quiet perhaps, in the Congress party meeting in Delhi. The Central Working Committee (CWC), the highest decision-making body of the Congress party, convened to select the party’s president.

Could it be that both these events, however distinct, originate from the same singular moment of history: The summer of 2004, when Sonia Gandhi having just vanquished the Vajpayee-led Bharatiya Janata Party (BJP) in the general elections renounced the opportunity to be Prime Minister and named Dr Manmohan Singh to the post?

The summer that changed history

Over the last few months, following Rahul Gandhi’s decision to resign from the post of Congress party president, New Delhi has often resembled the summer of 2004. The iconic picture then was of Sonia Gandhi at one side of a large teak table in the central hall of Parliament surrounded by Congress parliamentarians on all sides pleading with her. She remained unmoved.

Fifteen years later, the venue is different, but the scene feels familiar—Congress central working committee members around a table, slightly more spacious, but equally ardently coaxing Mr Gandhi to reconsider his decision to resign as party president. He remained unmoved.

In 2004, a Congress worker held a gun to his head and threatened to fire if Sonia Gandhi did not change her mind not to be Prime Minister. Fortunately, better sense prevailed. He did not fire.

But the events fired a chain of events that altered the character of Indian democracy and provided Narendra Modi the space to emerge as an executive style prime minister.

The noise around Ms Gandhi’s renunciation of the prime minister’s position drowned out important changes in the structure of the Congress Parliamentary Party (CPP) that would go on to alter history.

While the All India Congress Committee (AICC) represents the overall Congress party, the CPP consists only of elected party members in the Lok Sabha and Rajya Sabha.

Leading up to the events, Sonia Gandhi had helped orchestrate an amendment to the constitution of the CPP that created the post of CPP Chairperson. The Chairperson was provided the authority to nominate leaders of the Lok Sabha and Rajya Sabha, which in effect meant that the Chairperson would decide who would be Prime Minister in the event the party was leading the government.

Acting on that authority, as Chairperson of CPP, Ms Gandhi named Dr Singh as Prime Minister.

If Dr Singh’s tenure as Prime Minister created the impression that there was a separate parallel power centre, it was because there really was a basis for one.

The failures of divided leadership appeared visibly in Dr Singh’s second term between 2009 and 2014. Stung by several corruption scandals, Dr Singh’s government struggled to respond. He lacked the mandate to reign in his coalition partners and steer his government.

Ms Gandhi had renounced the post of Prime Minister but never relinquished it. Her Prime Minister had never won a direct election and had no mandate. To citizens in the largest democracy in the world, it wasn’t clear who was really leading them.

Narenda Modi offered an executive leadership style that contrasted sharply with the confusion and blurred lines of responsibility during Dr Singh’s tenure.

Modi made it clear that he would be the one leading. He would be in charge. He was cast as the Prime Ministerial candidate—it was his election. When in office, it was clear he called the shots.

Modi’s executive style leadership appeared to have resonated. He was able to reach beyond the traditional support base of the BJP, in part, because his leadership style appealed to a broad segment of India frustrated with the complex decision-making process of Dr Singh’s tenure.

India yearned for leadership. Modi offered a model of centralized, decisive, swift and executive style decision making that held the promise of getting things done.

How would India’s democracy have fared, if in the summer of 2004, Ms Gandhi had decided that she would brave the criticism of her foreign birth and lead as Prime Minister with the mandate she had received?

How would India’s democracy have fared if, in the summer of 2004, Ms Gandhi had renounced and relinquished the post of Prime Minister and allowed another elected party member to lead the government, instead of Dr Singh?

Would Modi’s executive style of leadership have resonated so deeply if Ms Gandhi had allowed India to be led by those who were elected to lead?

We will never know. But the impacts are now coming into focus: the decision to revoke Article 370 in Jammu and Kashmir is one example.

For many of us watching from the outside, Indian democracy is a bit of a marvel. Overlaid on an extremely diverse and complex country, Indian democracy has routinely demonstrated its ability to rise in defense of its diversity and minorities. Compared to Western liberal democracies, India has far fewer mature institutions to safeguard against the erosion of rights, particularly for minorities. Yet, it holds the promise of safety, security and progress for its diverse minorities.

In part, this may have to do with the nature of leadership in the Indian constitution.

For those around the world looking at the great Indian democracy as a source of hope, the tragedy of the events in Jammu and Kashmir is not a question of whether it is right or wrong, legitimate or not. It is an illustration of how the nature of leadership in India has changed.

Gone is the need for leadership to rally, corral and shepherd through discourse in a consensus building approach. The revocation of Article 370 arrived swiftly, in the stealth of night and without discourse. And to imagine that this executive style approach to leadership was enabled, in part, by the decision to disempower political leadership, as Ms Gandhi did in 2004 by naming Dr Singh as Prime Minister.

KP Oli sworn in again as PM, no new faces in new cabinet
20 hours ago