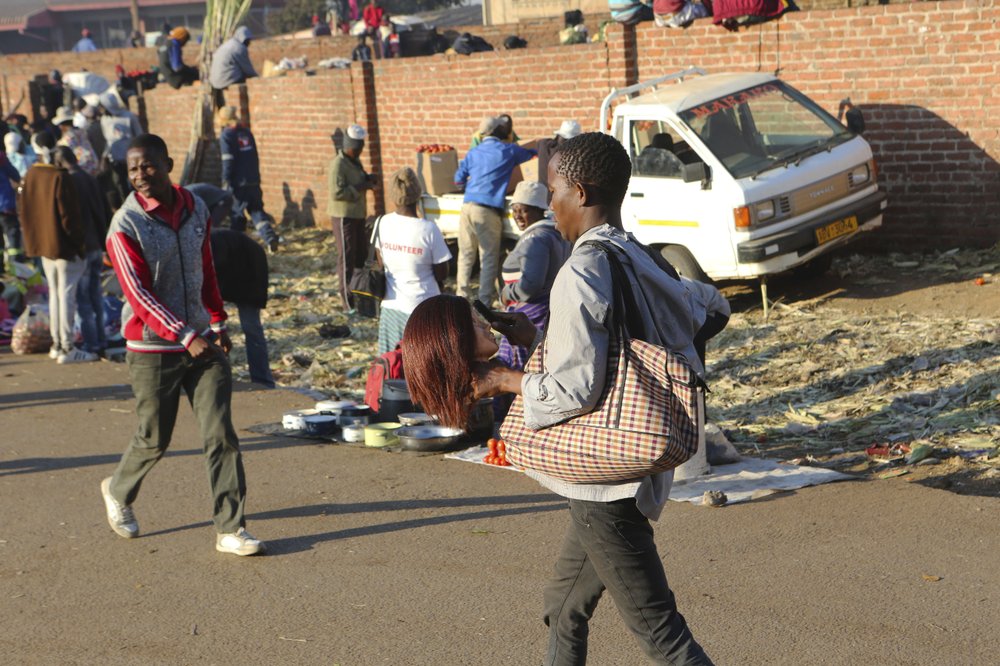 HARARE, Aug 11:  It is only a few hours since Zimbabwe’s schools closed for month-long August holidays, and 13-year-old Tanyaradzwa is already milling outside a bar “doing business,” he says.

He hawks cigarettes outside a dingy downtown bar in the capital, Harare, and for a fee, helps motorists find parking space.

“I am not a street kid. I come here to sell my things, go home and use the money to buy food,” said Tanyaradzwa, who did not give his last name to protect his privacy.

Tanyaradzwa would rather be home playing computer games with friends. But for his family of six to eat he must hang around the bar at the popular Elizabeth Hotel in hopes of cashing in on afternoon drinkers and passersby who want to buy cigarettes, he said.

His parents run a small vegetable stall in Glen View, a working-class residential area, but what they make is hardly enough to pay the bills, let alone buy food, he said.

Due to the spectacular deterioration of an economy that brimmed with hopeless than two years ago, many people can no longer afford to put food on the table without the help of their children - no matter how young.

Children are forced to juggle between school demands and supplementing the family income through street vending or selling at small stalls.

“These holidays just mean more work. There is no break because I now have no excuse not to work every day,” said Tanyaradzwa.

According to Mercy Mpata, a teachers’ representative, the demands are taking many children’s focus away from school.

“There is a lot of absenteeism because the children have a lot on their plate,” said Mpata, the spokeswoman for the Association of Rural Teachers of Zimbabwe. “Even if they come (to school), they are either sleepy or, instead of concentrating on schoolwork they are busy thinking ‘Where will we get the next meal if I don’t sell enough items after school today?’”

Teachers have their own grievances. They are paid the equivalent of about $50 a month and, like the rest of the civil service, say they cannot live on those wages, which they call “slave salaries.”

“We live in a community. We interact with these children and their parents. They are like family. That’s why we always try to give it our all ... but hungry teachers teaching hungry children, that’s tough,” said Mpata.

The food situation is dire in Zimbabwe, with about a third of the country’s 17 million people being food insecure due to drought and the worsening economy, according to a report released this month by U.N. agencies, international aid organizations and the government.

President Emmerson Mnangagwa declared the drought a national disaster on Tuesday. On the same day, the U.N. launched a $331 million appeal to mitigate the unfolding disaster. Children, according to the appeal, are some of the hardest hit. Close to 160,000 children and adolescents will need welfare and child protection services, according to the U.N.

“There is a risk that children and adolescents will increasingly experience psychosocial distress as some are likely to drop out of school, pushed away from home to seek employment,” said the U.N. in its appeal for funds.

Expectations were high that Zimbabwe’s economy would grow following Mugabe’s departure at the end of 2017. But the economy did not take off and will contract 3% this year, Finance Minister Mthuli Ncube, said this month.

After inflation reached a decade-high of 175.6% last month, Ncube suspended the country’s monthly inflation reports, saying that last year’s prices were in U.S. dollars and now they are in Zimbabwe’s currency, introduced in June, so they are not comparable.

However, that has not stopped schools from feeling the pinch of rising prices and eroding incomes. For the coming school term, some boarding schools are asking parents to provide food instead of paying school fee increases.

But that’s just for the fortunate children who still have parents and guardians able to afford such boarding facilities.

For many children such as Tanyaradzwa, juggling between school and eking out a living takes a toll, even as they desperately hold on to bouts of hope.

To achieve that dream, he is sacrificing much of his childhood.

“There is no time to play with friends,” he said. “The work, the school, it takes all of my time.”

KATHMANDU, June 26: The Fourth Walkathon will be organized coming Saturday in Kathmandu, to symbolically draw the attention of concerned... Read More...