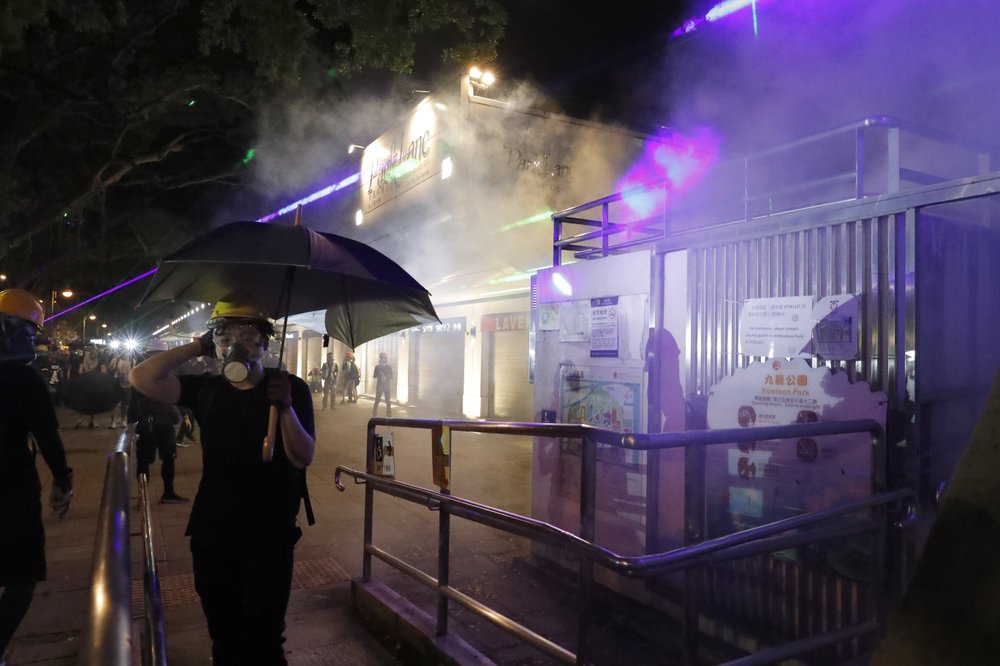 HONG KONG, Aug 10: Police fired tear gas at protesters in Hong Kong on Saturday after anti-government marches went ahead in two areas of the Chinese territory in defiance of an official ban.

Tear gas was fired at a crowd of some 1,000 people in a brief evening standoff at a commuter rail station in Tai Wai in the northern region of New Territories. In a separate incident, tear gas was fired at protesters who surrounded a police station in the Tsim Sha Tsui district on the northern side of Hong Kong’s harbor, opposite Hong Kong Island.

Hong Kong is in its ninth week of demonstrations that began in response to a proposed extradition law but has expanded to include other grievances and demands for more democratic freedoms.

Protesters want the resignation of the territory’s leader, Chief Executive Carrie Lam, and an investigation into complaints of abuses by police.

Demonstrators complain China’s ruling Communist Party and Hong Kong leaders are eroding the liberties promised to the former British colony when it returned to China in 1997.

Also Saturday evening, protesters blocked an entrance to a tunnel that carries traffic under the harbor in the Hung Hom area.

Earlier, afternoon protest marches went ahead in two areas, Wong Tai Sin and Tai Po, despite a police refusal of permission for the gatherings.

“I miss the British colony,” said a protester at Tai Po, Alexandra Wong, who carried two British flags and wore a T-shirt that said, “Establish a Democratic China.”

Wong, 73, was among protesters carrying British, Taiwanese or U.S. flags. Some chide them for playing into Beijing’s claim that hostile foreign forces are behind the demonstrations.

Of those accusations, Wong said, “I don’t care what the government says. They will say anything.”

At the police station in Tsim Sha Tsui, people who appeared to be local residents surrounded the building after protesters left.

The residents called for the release of people who had been arrested during the protest and chanted, “Hong Kong police know the law and break the law!”

On Saturday morning, a group of parents staged a separate march, which received police approval, calling for better protection for children following incidents in which ordinary people have been caught in clashes between police and protesters.

“It’s dangerous to bring my child to participate in any protest,” said Natalie Lee, who was with her 2-year-old daughter. “Today’s march provides a good opportunity for us to bring our children to voice our demands and I hope more peaceful protesters will come out too.”

Opponents of the proposed extradition law said it would hurt the independence of Hong Kong courts and expose residents to political cases. The government suspended consideration of the proposed law.

Beijing has criticized some protesters as violent radicals spurred on by foreign forces bent on containing China’s development.

For their part, protesters say police have used excessive force and ignored calls for help when thugs attacked civilians in a commuter rail station.

Lam defended her government’s handling of the protests in a phone call with Britain’s foreign secretary, Dominic Raab.

The protests have strained Beijing’s relations with Britain, which has called on China to honor the terms of their handover agreement and the freedoms its promises.

In the call Friday, Lam told Raab that while her government “respects the diverse views held by members of the public on various issues as well as the freedoms of speech and assembly, it will not let violence and illegal behaviors disrupt public order,” said a statement issued by her office.

Also Saturday, several thousand people dressed in black held a sit-in protest for a second day at Hong Kong’s busy international airport. They chanted slogans, set up TV sets to show video of recent protests and handed out leaflets explaining the controversy over the proposed extradition law and demands for universal voting rights.