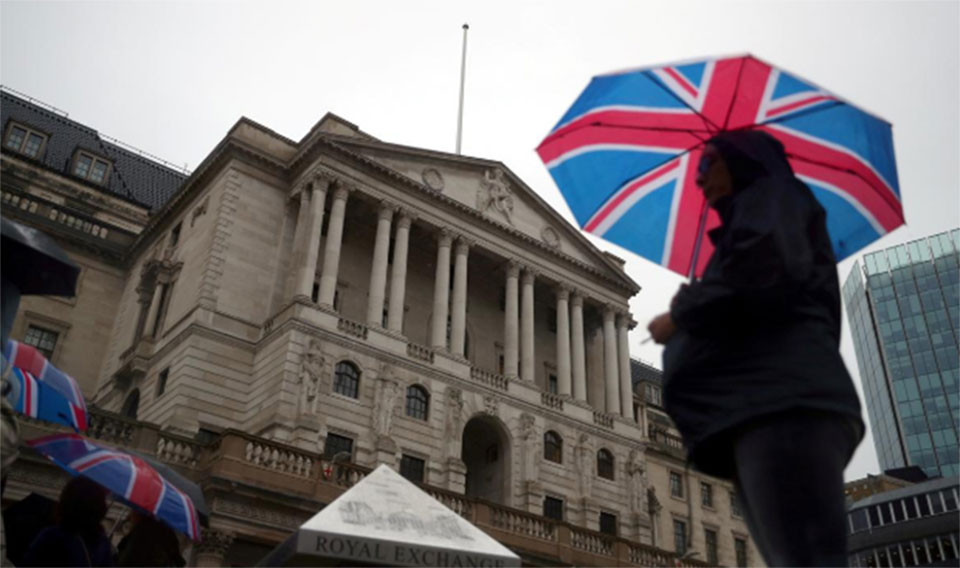 FILE PHOTO: A pedestrian shelters under a Union Flag umbrella in front of the Bank of England, in London, Britain August 16, 2018. REUTERS/ Hannah McKay/File Photo

LONDON, Aug 9: The British economy shrank unexpectedly for the first time since 2012 in the second quarter, dragged down by a slump in manufacturing just as Prime Minister Boris Johnson prepares to leave the European Union with or without a divorce deal.

In the most startling economic warning sign since the 2016 Brexit referendum, gross domestic product fell at a quarterly rate of 0.2% in the three months to June, below all forecasts in a Reuters poll that had pointed to a flat reading.

Sterling fell to the day's low of $1.2088 GBP=D3 after the GDP data was published, down 0.4% on the day, before recovering slightly. Against the euro, the pound also fell EURGBP=D3 and was last down 0.3%, not far from a two-year low.

Year-on-year economic growth slid to 1.2% from 1.8% in the first quarter, Britain’s Office for National Statistics said, its weakest since the start of 2018. Annual growth in June alone was the weakest since August 2013 at 1.0%.

“The economy is stalling,” PwC senior economist Mike Jakeman said. He said the Brexit crisis and the uncertain global outlook left Britain’s economy on a “knife-edge” for the third quarter.

Many car factories ramped up manufacturing at the start of the year and brought forward production breaks to prepare for Britain’s original Brexit date of March 29, but the divorce was delayed by then Prime Minister Theresa May.

“Manufacturing output fell back after a strong start to the year, with production brought forward ahead of the UK’s original departure date from the EU,” ONS statistician Rob Kent Smith said.

HAZARD WARNING
On winning the top job last month, Johnson set up a showdown with the EU by vowing to negotiate a new divorce deal and threatening that, if the bloc refused, he would take Britain out on Oct. 31 without a deal.

But the economic hazard warning lights are flashing just as the trade battle between the United States and China unsettles the world economy.

“This is a challenging period across the global economy, with growth slowing in many countries,” finance minister Sajid Javid said.

“But the fundamentals of the British economy are strong – wages are growing, employment is at a record high and we’re forecast to grow faster than Germany, Italy and Japan this year.”

Many investors say a no-deal Brexit would send shock waves through the world economy, tip Britain into a recession, roil financial markets and weaken London’s position as the pre-eminent international financial center.

The Bank of England last week predicted that growth will only stage a limited pick-up to a quarterly rate of 0.3% during the current quarter and that growth for the year as a whole will drop to 1.3%.

June manufacturing data was also unexpectedly poor and output for the quarter contracted at the fastest rate since early 2009, when Britain was mired in recession.

Private-sector business surveys have shown the manufacturing and construction sectors both contracted in July, while the larger services sector eked out only modest growth.

Britain’s economy has slowed since June 2016’s vote to leave the EU, with annual growth rates dropping from more than 2% before the referendum to expand by 1.4% last year.

Ever since the 2016 EU referendum, the pound has gyrated to the rhetoric of the Brexit divorce: after the result was announced, it had the biggest one-day fall since the era of free-floating exchange rates was introduced in the early 1970s.

The finance minister-in-waiting for the opposition Labour Party, John McDonnell, said: “The Tories’ Brexit bungling, including Boris Johnson now taking us towards no-deal, is breaking the economy.”

“It’s time for an end to this incompetence from successive Conservative governments – we need a general election and a Labour government to turn this country around.”