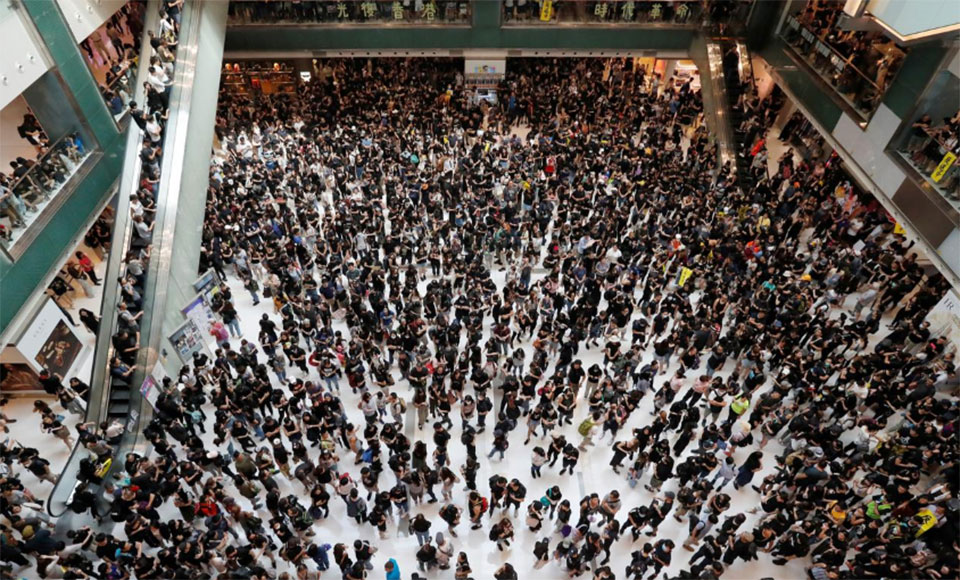 HONG KONG, Aug 7: Hong Kong is facing its worst crisis since it returned from British to Chinese rule in 1997, the head of China’s Hong Kong and Macau Affairs office said on Wednesday, as more protests were set to rock the Asian financial hub.

The city has faced months of sometimes violent protests that began with opposition to a now-suspended extradition law and which have evolved into a direct challenge to the government of embattled leader Carrie Lam.

“Hong Kong’s crisis ... has continued for 60 days, and is getting worse and worse,” Zhang Xiaoming, one of the most senior Chinese officials overseeing Hong Kong affairs, said during a meeting in the southern Chinese city of Shenzhen.

“Violent activities are intensifying and the impact on society is spreading wider. It can be said that Hong Kong is now facing the most severe situation since its handover,” he said.

Zhang was holding a forum that included Hong Kong delegates to China’s parliament, the National People’s Congress and China’s main consultative body, the CPPCC, to discuss the political crisis in the territory. No opposition democratic figures or protest representatives attended.

The protests, during which millions of people have taken to the streets, began in opposition to an extradition law that would have allowed suspects to be tried in mainland courts controlled by the Communist Party.

The protests, fuelled by many residents’ fears of eroding freedoms under the tightening Communist Party control, now pose the biggest popular challenge to Chinese President Xi Jinping since he took power in 2012.

Hong Kong lawyers dressed in black are set to march in silence later on Wednesday to call on the government to safeguard the independence of the city’s justice department.

The city’s lawyers fear the justice department’s prosecutions of arrested protesters are taking on an increasingly political slant after 44 protesters were charged with rioting, an offence that carries a 10-year jail term.

Hong Kong’s mini-constitution, known as the Basic Law, states that the city’s Department of Justice “shall control criminal prosecutions, free from any interference”.

Hong Kong was guaranteed freedoms not granted in mainland China, including an independent judiciary, under a “one country, two systems” formula when Britain handed it back to China in 1997. However, many residents see the extradition bill as part of a relentless march towards mainland control.

Protesters are demanding a complete withdrawal of the bill, an independent inquiry into the crisis, an investigation into what they say is excessive use of force by police, and for Lam to step down.

The movement has garnered support from broad swaths of society, with teachers, rights groups, financial industry workers and even civil servants taking to the streets.

In China’s sharpest rebuke yet of the protesters, the government warned them on Tuesday not to “play with fire” and called on Hong Kong citizens to protect their homeland.

The Global Times, a Chinese tabloid published by the Communist Party’s People’s Daily, showed a video on its official Twitter feed of thousands of police officers taking part in an anti-riot training drill in Shenzhen, which borders Hong Kong.

The video showed officers in helmets and shields clashing with people in black shirts and yellow construction hats, similar to the unofficial uniform of protesters in Hong Kong.

Police have arrested more than 500 people in the protests so far and fired nearly 2,000 rounds of tear gas.

Protesters have also demanded the release of Keith Fong, a student union leader from Baptist University, who was arrested on Tuesday night after being caught buying laser pointers by several plain-clothes police.

Police said in a statement a man was found in possession of offensive weapons. Protesters have often aimed pointers, which are widely available in shops, at police during recent clashes.

RSP meeting to continue today at 11 am
12 minutes ago