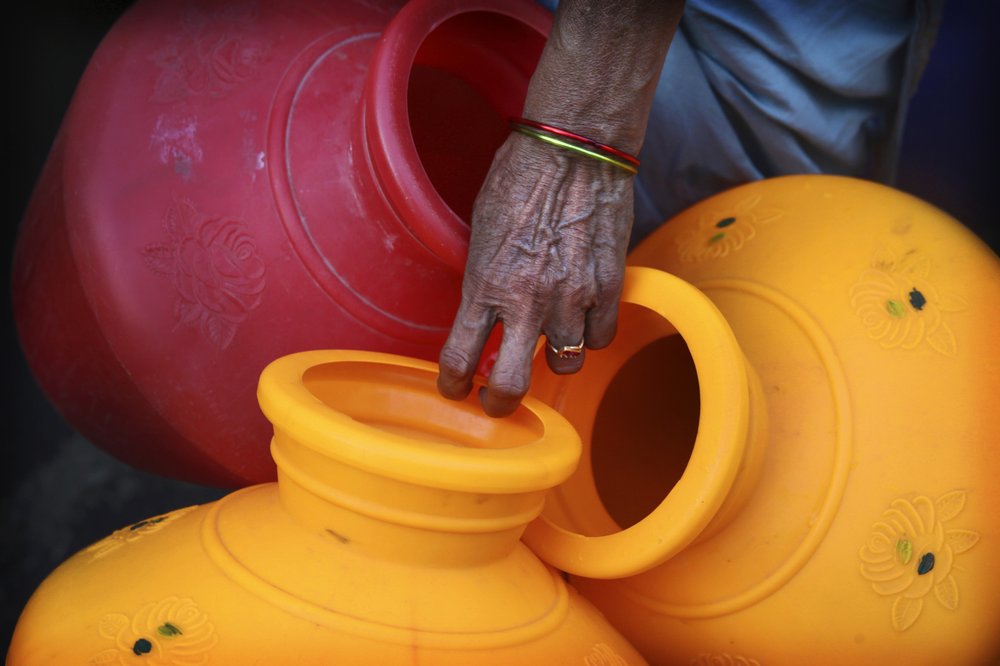 In this Monday, July 15, 2019, photo, a woman holds plastic vessels and wait for a water truck to arrive in Chennai, capital of the southern Indian state of Tamil Nadu. In Chennai, a coastal city of about 10 million and the capital of Tamil Nadu state, rapid development and rampant construction have overtaxed a once-abundant natural water supply, forcing the government to spend huge sums to desalinate sea water, bring water by train from hundreds of kilometers (miles) away and deploy an army of water trucks to people whose household taps have suddenly run dry. (AP Photo/Manish Swarup)

CHENNAI, Aug 6: Dozens of billion-dollar companies. Thousands of high-paying IT and manufacturing jobs. Luxury apartments towering over the Bay of Bengal. The southern Indian city of Chennai has one of the world’s fastest-growing economies, but it’s out of water, threatening to put a brake on all that growth.

In Chennai, a coastal city of about 10 million and the capital of Tamil Nadu state, rapid development and rampant construction have overtaxed a once-abundant natural water supply, forcing the government to spend huge sums to desalinate sea water, bring water by train from hundreds of kilometers (miles) away and deploy an army of water trucks to people whose household taps have suddenly run dry.

The water shortfall is disrupting business at all levels, from the gleaming, 45-kilometer (28-mile) IT Corridor to the neighborhood tea shop. Some workers have been asked not to report to the office while others have had to give up a day’s wages to wait for the erratic water truck that makes daily deliveries.

The Madras Chamber of Commerce, named for what British colonialists called the city, said that results from a survey sent to its 700 members in May found that most industries in the city’s diversified economy have been affected by the crisis, which has caused disruptions in production schedules, higher operation costs and a reluctance to invest in expansion because of the uncertainty about future water supplies.

Companies are paying 30% more for private supplies sourced from farther outside Chennai and delivered by water tankers, which require dedicated workers to manage. Others have set up their own water-recycling systems, said chamber Secretary-General K. Saraswathi.

“Buying water in tankers cannot be depended (upon) and is not sustainable,” Saraswathi said. “Small-capacity desalination plants along with supply of tertiary treated water have to be taken up on war footing.”

Receiving about 80% of its annual rainfall in two months, October and November, Chennai is naturally prone to droughts and floods, exacerbated in recent years by climate change. But some of the disaster is manmade.

Chennai’s population has more than tripled in three decades. And like many cities across India, in a drive to develop, the Chennai Municipal Corporation has changed zoning to permit building over filled-in ponds and canals and on flood plains, which means the monsoon season’s copious rainfall isn’t absorbed to recharge groundwater supplies.

Organized water distribution in Chennai dates to British rule in the 1870s.

At Red Hills Lake, a lone fisherman casts a line into a shallow pool — all that remains of the 4,500-acre (1,820-hectare) reservoir. Elsewhere, sheep graze and bulldozers fill truckloads of sand from the dry lakebed. Red Hills and the three other rain-fed reservoirs that are meant to supply the bulk of Chennai’s water have been left without “a single drop of water,” Edappadi Palaniswami, Tamil Nadu’s chief minister, said in June.

He said about 9,800 water truck trips were being made daily to supply drinking water in Chennai, but that his office had been flooded with requests from apartment owners for more.

On the trash-strewn banks of the Cooum River, one of half a dozen natural waterways in the city, bulldozers level the earth for a new high-rise on one side while a small community of tin-roofed shacks rely upon a hand pump for their daily water needs. Because sewage treatment capacity is far below sewage generated, the city’s rivers and canals are filled with raw waste.

Nearby, Sonalal Saw, 24, takes an auto rickshaw to a public tap under a metro rail overpass every four or five days to fill more than a dozen 50-liter (13-gallon) jugs for his tea shop. As Saw loads up the vehicle, a steady stream of people arrive at the tap, carrying water jugs on wagons attached to bicycles or balanced with rope on motorcycles.

Behind the tap is one of the metro board’s distribution centers. Trucks contracted by the city fill up tankers to deliver to residential areas, including Royapettah, a busy working-class neighborhood where a line of women with colorful plastic jugs wait in line for the truck’s arrival.

The trucks have been coming nearly every day for a month, often several times a day, but the schedule is erratic, residents say, forcing them to forego work waiting for water delivery.

As he helped his neighbors fill their jugs, tailor Syed Ansarbasha, 40, said that development was to blame for the crisis.

“The rainwater which flows into the lakes, those lakes now have houses, factories (constructed on them),” he said. Where will the water go when it rains now? That’s why we have water problem,” he said.

This is the first time Royapettah resident Rasheeqa Sheriff, 15, has experienced water scarcity in her young life. Her family’s three-story apartment building has always had running taps — a luxury that she said continuously astounded her grandparents, who saw it as a sign of Chennai’s modernity and India’s great progress.

“I feel like, wait, have we gone back in time?” said Sheriff, who aspires to be a barrister like her father.

“The thing is, we didn’t take care of the rivers, canals. We are responsible, but nobody’s ready to take this blame. Everyone’s blaming the government. Come on, blame yourselves,” she said.

Evidence of growth and development is everywhere in Chennai. A brand new apartment complex in the western outskirts called Golden Opulence hung a banner advertising big capital letters: “Drinking water in abundance, absolutely free!” Nearby, Ford and Hyundai factories assemble cars and IT companies including Foxconn, the Taiwanese purveyor of the iPhone, build gadgets for India’s growing electronics export business.

Chennai’s Metropolitan Water Supply and Sewerage Board is delivering about 500 million liters (132 million gallons) of water per day — less than half of the city’s needs. It’s supplementing its supplies with water brought by rail from a dam hundreds of kilometers (miles) away. It is also planning a third desalination plant.

“Shiny new investments may always be required for large-scale water supply systems, but we all need to increase the focus on the efficient use and management of our water too,” said Vivian Castro-Woolridge, an urban affairs specialist at the Asian Development Bank who runs a project to improve Chennai’s climate change resiliency.

“It’s not an optimal use of limited financial resources to put more water into any system without also ensuring proper network management, active leak management programs and skilled staff to minimize water losses,” she said.

To be sure, the problem isn’t limited to Chennai. The National Institution for Transforming India, a government think tank, said in a report last year that India was undergoing the worst water crisis in its history. “Critical groundwater resources — which account for 40% of our water supply — are being depleted at unsustainable rates,” it said.

More than 600 million people are facing “acute” water shortages, and 21 Indian cities, including Chennai, are expected to run out of groundwater by 2020.

With the London-based consultancy Oxford Economics predicting all of the world’s 10-fastest growing cities in India, the implications globally could be significant.

The water crisis “raises the question of whether the infrastructure will be in place to support the growth. If not, then the consequence would probably be much slower growth,” said Richard Holt, the consultancy’s head of global cities research.

GAUSHALA, April 20: The Central Child Welfare Board has rescued 28 children from India. The children had been taken to... Read More...