Team Nepal on the decline in absence of cricketing body 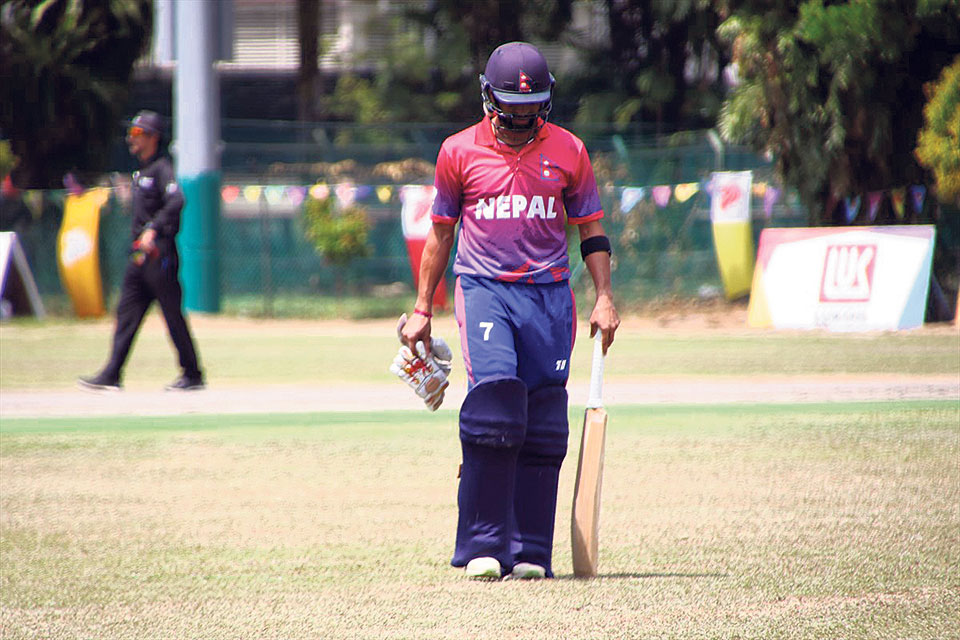 Nepal national cricket team member Binod Bhandari walks back after his dismissal in a match against Kuwait played at Indian Association Ground in Singapore in this recent photo. Photo Courtesy: Raman Shiwakoti

Nepal lost the chance to book its place in the ICC World T20 Qualifiers, and subsequently its dream to feature in another T20 World Cup. The home team, Singapore, won the tournament and a spot in the global qualifiers.

For the umpteenth time, Captain Paras Khadka and Vice-captain Gyanendra Malla led the batting charts for Nepal, with none to less similar contributions from rest of the batting order.

Bowling, more so spin, has been Nepal’s strength all these years. But none of the Nepali bowlers finished in the top ten most economical bowlers of the tournament. Karan KC was Nepal’s most economical bowler, conceding 7.38 runs in his 13 overs followed by Basant Regmi and Sompal Kami. Ironically, Sandeep Lamichhane finished 20th on the list, conceding more than 8 runs per over. Kami, who conceded at 7.50 runs per over, only bowled 10 overs out of possible 16 (4 matches). In contrast, three Singapore bowlers occupy the top five places in the list. In fact, Vijay Selladore and Janak Prakash are in second and third positions, conceding 5.09 and 5.33 runs per over respectively.

Nepal’s batting struggled, with the exception of Malla and Khadka, none of the Nepali batsmen were able to reach 100 runs in the tournament. The two openers did the bulk of scoring. Young players like Dipendra Singh Airee and Rohit Paudel weren’t helpful either. Kami, highly rated for his batting, was run-out in both the opportunities he got. Sharad Vesawkar scored 55 runs off 56 deliveries in four innings which lacked the demands of T20 cricket even in an anchor’s role. Likewise, Pradeep Airee and Binod Bhandari yet again failed to grasp their chance, contributing 12 (one innings) and 25 runs (3 innings) respectively.

Suspended CAN
Cricket Association of Nepal (CAN) was suspended in April, 2016. The cricket governing board was dissolved by the government of Nepal in November 2014 on the grounds of incompetence. CAN was then suspended by the ICC citing government interference in its operations. The suspension did not affect the ability of Nepal’s national teams to participate in ICC tournaments but this has affected Nepal’s performance.

Ramesh Silwal, the new member-secretary of National Sports Council (NSC), has been vocal about a ‘virus’ which he said is directly affecting the CAN reinstatement process. Silwal claimed that the same ‘virus’ has also sent an official letter to the ICC, the apex cricketing body, requesting ‘not to reinstate CAN’. He further claimed that the ‘virus’ is not from the government and nobody has right to hold the game hostage.

A five-member independent panel formed by the ICC to reinstate CAN has already initiated the provincial election process. Except for Banke, Parsa and Kathmandu, the rest of the cricketing districts have held the elections.

According to Lekh Bahadur Chhetri, who is a member of the panel, CAN hopes to conclude the provincial elections process by August and hold the central election by the second week of September. “Such letters don’t affect the ICC process. Once we hold all the elections, we will start the process to reinstate CAN,” stated Chhetri.

He also added that ICC is struggling to decide on handing over the leadership of the governing body to any particular entity.

Gradual decline
Nepal played ICC World T20 in Bangladesh in 2014. Nepal won more matches than it lost but it was denied the main group stage. That was the pinnacle of Nepali cricket. Seven players, Paras Khadka, Gyanendra Malla, Pradeep Airee, Binod Bhandari, Sompal Kami, Basant Regmi and Sharad Vesawkar, from the current team were a part of that historic group of players which defeated Hong Kong and Afghanistan in the world stage.

In 2015, Nepal failed in the global qualifiers held in Ireland and Scotland. Again, the same seven players formed the core team with an addition of Karan KC, carrying the hope of 30 million people back home. To everyone’s dismay, Nepal finished at the bottom of the Group A points table, behind the likes of Jersey and the United States of America.

In 2018, when Nepal was already overwhelmed by the T20 premier leagues fever, young players like Paudel, Lamichhane, Dilip Nath, Anil Sah and Dipendra contributed, along with the experienced stalwarts to eventually win the ODI status. Nepal finished fourth in five-team Group B. Meanwhile, it defeated Papua New Guinea to seal the status finishing eighth in the playoffs.

That same year, Nepal had an opportunity to lock horns with the world’s best teams -- India and Pakistan. Nepal, fresh from ODI status and as runaway favorites, lost to Oman and the United Arab Emirates (UAE) in the ACC Asia Qualifiers held in Malaysia to miss the lone Asia Cup berth. Nepal finished fourth in the six-team points table. To everyone’s surprise, Hong Kong, which had lost its ODI status earlier in the world cup qualifiers, defeated the UAE in the final to seal the Asia Cup appearance.

Subash Khakurel and Sagar Pun, who featured for Nepal in World T20, were part of the team with the rest of the usual faces.

Come 2019, Nepal failed to clear the Asian hurdle even before reaching the global one like it did in 2015 and 2013. Again, same corp of seven to nine players is carrying the team.

Captain Paras says it is high time that ‘good people’ acted to save the Nepali cricket.

The absence of a governing body and lack of proper domestic structure have started to take its toll on the Nepali cricket. Nepal is reduced to a handful of players capable of producing good results at highest levels with some degree of consistency, the stakeholders in the system have done next to nothing, says Khadka.

“I have said a million times in the last ten years the things we need to do in order for cricket to grow but things have not changed. There aren’t enough people in the system who would do something for the game to grow,” stated Khadka, in conversation with Republica.

Khadka, who took Nepal from Division 5 to ODI status, has been with the team for more than 10 years now. He has seen, suffered and survived all the troughs and crests of Nepali cricket. He chooses to stay patient hoping that some ‘good people’ would rescue the Nepali cricket.

“Now, the only thing to do is to have patience for good people to come on board. Nothing else will work until then,” added Khadka.