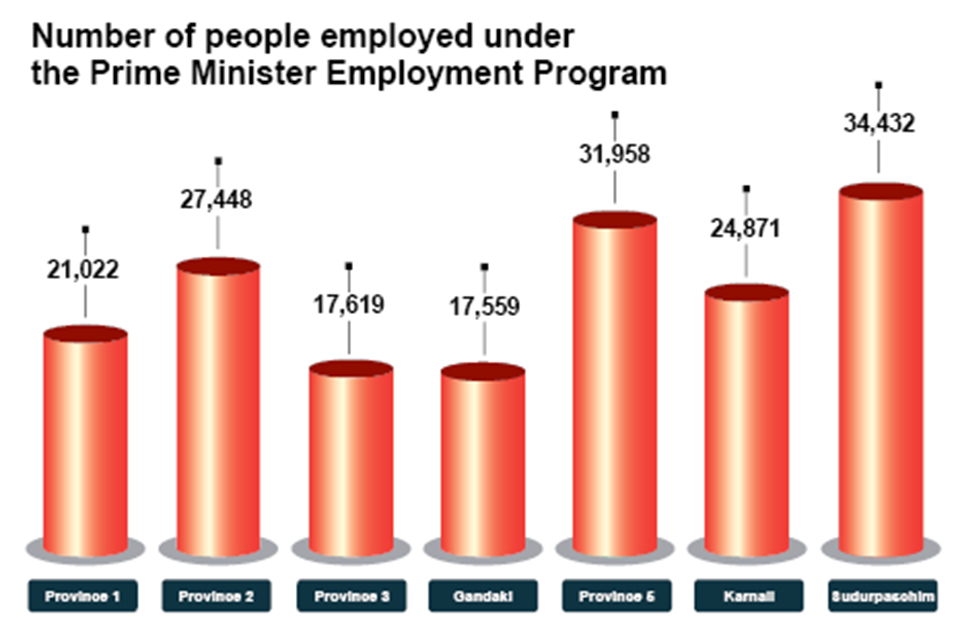 KATHMANDU, Aug 2: The government has provided employment to nearly 175,909 people through 6,864 projects across the country run by various local units under the Prime Minister Employment Program in Fiscal Year 2018/19.

According to the Ministry of Labor, Employment and Social Security (MoLESS), these projects provided employment for 13 days per person in average.

“The issue of employment was never a priority earlier. But, we have been able to create employment opportunities in a massive scale,” he said, vowing to meet the target of creating half a million employment opportunities in the current fiscal year.According to the ministry, the federal government has provided Rs 2.36 billion in conditional grants to the local units to run projects that create works for unemployed citizens. Each local unit had received up to Rs 10 million to run such projects for employment programs.

Prime Minister KP Sharma Oli had launched the Prime Minister Employment Program amid much fanfare on February 13 last year. However, the program is courting controversy in recent days amid news reports that the funds were being doled out to employment programs in a haphazard manner. Many have raised concerns over the impact of the program, saying that the many such projects operated at the local units were nothing more than a photo op.

Minister Bista organized the press meet in the wake of criticisms that the government was taking loans from development partners to fund the program.

Speaking at the press meet, Bista defended the program, touting its success in terms of creating employment opportunities. “The employment program has not only created employment opportunities and help reduced the government liabilities for unemployment allowance, it is also helping the local units in building community infrastructures,” he said, adding that these employment programs include road construction and maintenance, irrigation canals, preservation of ponds and heritage sites, and construction of walking trails, among others.Under the program, the government mobilized unemployed citizens, who are registered with the Employment Service Center set up in each local unit, local development programs. Over 1.71 million people have registered in these centers across the country so far, according to data compiled by the ministry.However, ministry officials say that they are still in the process of verifying the eligibility of the applicants.

Under the program that was introduced also to implement the Act to Guarantee the Right to Employment, 2075, all citizens registered with the ESCs should get employment opportunity for at least 100 days in a year. If the government fails to provide employment opportunities to those registered with the ESCs, it must pay them 50 percent of the minimum wage as unemployed allowance.

Youths yet to benefit from loan against academic certificates

KATHMANDU, June 9: Only six youths have received subsidized loans so far for self-employment under the much-hyped scheme introduced by the... Read More...

KATHMANDU, June 8: The government has rolled back its plan of employing all youths by Fiscal Year 2022/23, as per... Read More...

KATHMANDU, Feb 12: The government is all set to commence the Prime Minister Employment Program (PMEP) on Wednesday. ... Read More...

Price of gold declines
6 minutes ago