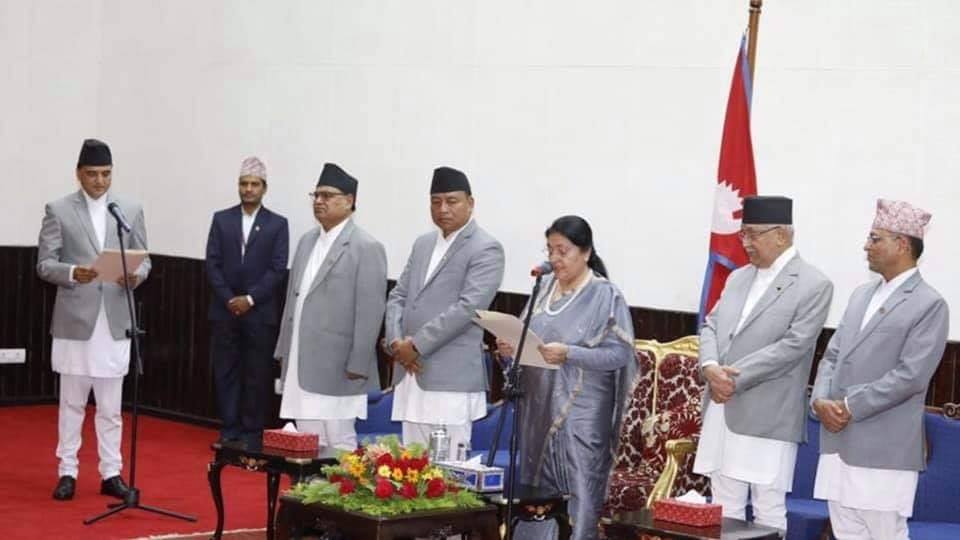 KATHMANDU, Aug 1: Prime Minister KP Oli on Wednesday appointed the party's youth leader Yogesh Bhattarai as Minister for Culture, Tourism and Civil Aviation, honoring his own promise to make him cabinet colleague during the parliamentary election campaign some two years ago. President Bidya Devi Bhandari administered the oath of office and secrecy amid a special function at the President's Office in Shital Niwas Wednesday afternoon.

With his decision to pick Bhattarai—a leader seen close to Madhav Kumar Nepal – in the tourism ministry that was without minister after the death of then minister Rabindra Adhikari in a helicopter accident in Taplejung, Prime Minister Oli has not only dismissed speculations that he was planning to reshuffle the cabinet but also given a subtle message that he intends to balance power-sharing within the ruling Nepal Communist Party (NCP).

After assuming office at Singha Durbar, newly-appointed Minister Bhattarai promised to complete the unfinished tasks left by the late minister Adhikari. Stating that Adhikari had taken the ministry to a new height as minister, Bhattarai said he will move ahead taking advice from predecessors and officials at the ministry.

A lawmaker elected from Taplejung district, Bhattarai is also a standing committee member of the NCP. Bhattarai, who had been a vocal critic of Prime Minister Oli and his aides in the past, had softened his tone in recent months.

Born in 1966, Bhattarai made his political career through student politics. He was chief of the erstwhile CPN-UML's students' wing, All Nepal National Free Students Union (ANNFSU) in 1996. He had played crucial role in the April uprising against king's direct rule in 2006.

Bhattarai had contested from Kathmandu Constituency-6 in both the first and second constituent assembly elections held in 2008 and 2013. Although he had to face defeat in both the elections, Bhattarai was elected from Taplejung district during the parliamentary elections in 2017.

Despite his assurance to include him in the cabinet, Prime Minister Oli was unable to accommodate Bhattarai last year due to party's internal politics. With his appointment as minister on Wednesday, many have lauded Prime Minister Oli for fulfilling his own promise.

Oli himself was overseeing the ministry after Adhikari's death five months ago. “Prime Minister Oli made this proposal at 1 pm after calling me to his office. He has given me this responsibility in consultation with all senior leaders,” he said.

The appointment of Bhattarai comes at a time when a bunch of promising youth ministers have miserably failed to deliver. Many have already started questioning if Bhattarai, who is popular both within and outside the party, will be able to maintain the same image as minister.

Although he has had good reputation as a political leader, this is the first time Bhattarai has assumed any ministerial portfolio.

Gagan Thapa, a popular youth leader and lawmaker in his congratulatory message on Twitter said success of Bhattarai as a minister is not only linked to his personal political career and the future of his party, but also to the high hope and trust people have put on younger generation leaders for the betterment of the country.

Indeed, the appointment of Bhattarai as minister comes at a time when both the civil aviation and tourism sectors face myriads of challenges. Analysts say Bhattarai's success will be largely linked with the commercial success of the ailing Nepal Airlines Corporation (NAC). Although the NAC procured two wide-body aircraft, lack of proper homework on how to operate the planes profitably and alleged corruption in their procurement has rendered the NAC unable to pay the installments of the aircraft.

Similarly, it will be equally important for Minister Bhattarai to see that the under-construction Pokhara and Bhairahawa international airports are completed and made operational on time and resolve the environmental issues pertaining to the Nijgadh International Airport to expedite its work. The expansion bid of Tribhuvan International Airport and develop it as a boutique airport and the government's attempt to remove Nepali national flag carriers from the European Union's blacklist have been pushed onto the backburner after the demise of then minister Adhikari.

Likewise, on the tourism front, equally big challenges await him. While the reconstruction of most monuments has not moved ahead smoothly, UNESCO has threatened to designate all cultural heritage sites in Kathmandu Valley in Danger List. Bhattarai as a minister will also need to work hard to make the Visit Nepal Year 2020 a success. Nepal aims to bring in 2 million tourists to Nepal in that year.

While Nepal is focusing on increasing the number of tourists, the actual earnings from the tourism sector is decreasing, largely due to reduced average length of stay of tourists and less spending by the tourists in Nepal. These issues also demand serious policy interventions from him.

Whether he will be able to come out of the influence of certain interest groups will also be equally important to determine his success as a minister, according to tourism industry insiders.