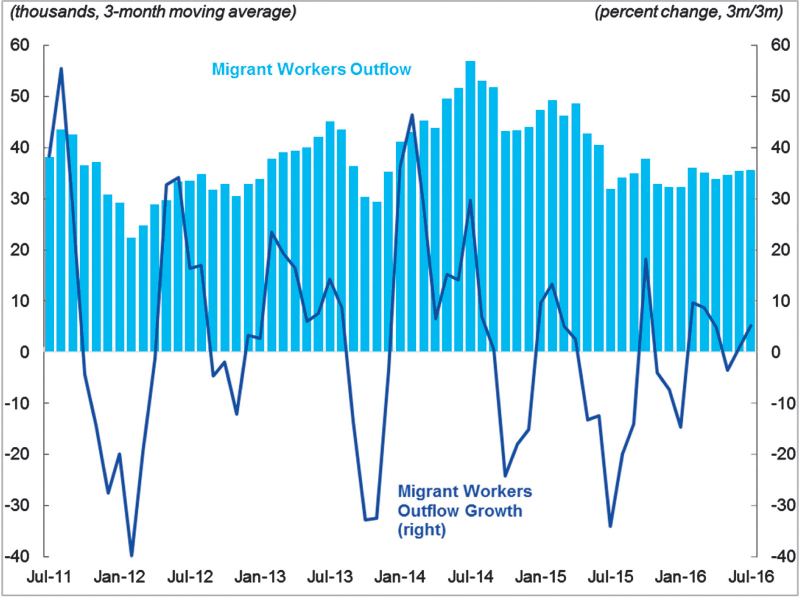 KATHMANDU, Oct 7: The overall departures of migrant workers have settled at a new lower level since the devastating earthquake in April last year, according to the recently published Nepal Development Updates report of the World Bank.

From an average departure of 45,000 per month prior to April 2015, migrant worker departures have slowed and are now averaging 33,000 per month, the report stated.
Experts say the country’s economy will bear the brunt of the decline. As oil prices in particular, and commodity prices in general, are expected to remain at their current levels during the forecast period, the possibility of a slowdown in remittances remains, according to Sudyumna Dahal, country economist at World Bank Nepal.

“Given that remittances enable the consumption centric structure of the Nepalese economy and that the government relies on taxation of imports as a major source of revenue, even a modest contraction in remittances would have an adverse effect on growth and fiscal and external accounts, in addition to the impact on poverty reduction,” he added.

Both push and pull factors have contributed to this slowdown, the report highlighted. In the aftermath of the earthquake, potential migrants are increasingly choosing to stay at home to support their families with rebuilding homes and livelihoods.

The oil-exporting GCC and Malaysia are the destinations of almost 97 percent of Nepali migrants, excluding those going to India, and a key source of remittances.

The departure of migrant workers has remained stagnant in the fiscal year 2016. And despite some pickup at the end of the fiscal year, the growth rate remains negative when controlling for seasonal effects, the report further stated.

Economist Dahal said there is a need to urgently increase opportunities at home and increase capital spending in the short term.

“This spending could be directed towards a construction of a national irrigation system that not only buffers effects on growth, but also helps delink agricultural output from the effects of the monsoon.”

In the medium and long term, Nepal needs to move out from an inherently risky strategy of relying on a single driver for growth that is vulnerable to external shocks, according to him.

“While healthy migration and related remittance flows will continue to play an important role for external balance and disposable income support, Nepal will need to leverage its key resources – human and natural capital – to attract investment and lay the foundations for creation of opportunities and economic diversification at home,” Dahal further added.

RAJBIRAJ, May 10: A Nepali migrant worker has died in Saudi Arabia. He died on Tuesday night. ... Read More...

ITAHARI, Aug 6: A migrant worker Nagendra Chaudhary from Itahari Sub-metropolis -7 has been murdered in Malaysia on Friday. He... Read More...